Žiče Charterhouse was a Carthusian monastery near the village of Žiče near Konjice in north-eastern Slovenia. Today it is an important historical and cultural monument with about 20.000 visitors per year. It hosts many cultural events, trying to revitalise historical memory of the Carthusians in this area.

Carthusian Order is a Catholic order, founded in 1084, which chooses isolated locations since it is devoted to solitude and contemplation. In 1160, a group of Carthusians came from the French Grande Chartreuse near Grenoble to Konjice, making the Žiče Charterhouse the first Carthusian monastery in the Central Europe. In 1165 it was affirmed by the authorities, Ottokar III of Styria, and his son, Duke Ottokar IV of Styria. At first, the monastic revenues were small, but after the 13th century, at the time of the Great Christian Schism, Žiče Chaterhouse became the seat of the Prior General of Carthusian Order and consequently, in the century that followed, a European cultural and political centre.

Žiče Charterhouse is a medieval monastery marked by typical gothic Carthusian architecture. The whole complex – walls with towers, both monasteries and the church – were built in this style.

The renovation work on the stone capitels in the Church of the Visitation (Ecclesia minor), the lower Romanesque church of the Žiče Charterhouse in Špitalič, place the church in the context of high quality early Gothic architecture of central Europe.

As Carthusians devoted their lives to writing, copying and illuminating manuscripts, the monastery had a Library with more than 2.000 volumes, mostly manuscripts, some of them displaying colourful painted initials and other illuminated elements, known as a distinctive Žiče style. Only a fraction of the library, about 120 manuscripts and 100 fragments, survived.

Because of the reconstruction work, the monastery – its well-preserved parish church, the renovated Upper monastery, the monastery cellar with winery, apothecary’s shop with old herbal remedies – is slowly becoming alive again. Since 2007 it houses an exhibition The Cultural Heritage of Žiče Charterhouse, prepared by Nataša Golob, an impressive museum collection and audio-viewing. 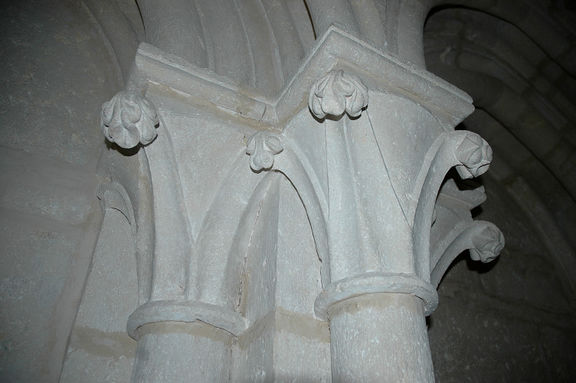