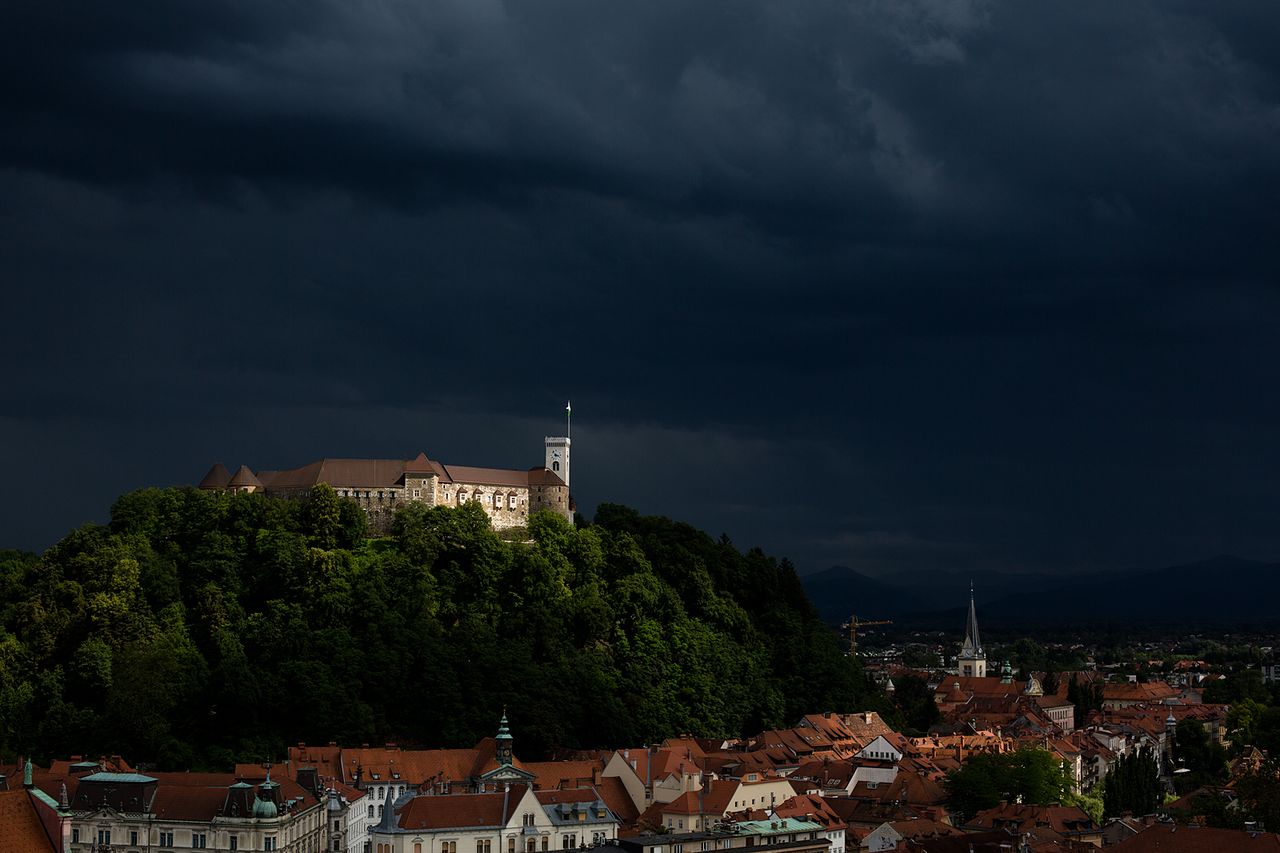 The Ljubljana Castle is situated on a small hill in the centre of Ljubljana. Rebuilt several times, some parts of today's structure originated in the 15th century. The castle complex has been renovated over a 40-year period by various architects; one can even trace Jože Plečnik's various ideas at the Castle Hill. Ljubljana Castle serves as a venue for a number of cultural events, including weddings and exhibitions. Over 400 events attract up to a million visitors per year.

Since 2011, the venue programme has been managed by the Ljubljanski grad Public Institute. In May 2015, a newly established Museum of Puppetry opened at the Ljubljana Castle.

The oldest castle on the hill probably dates back to the 11th century. Written sources mention it in 1144 as the seat of the feudal estate of the Carinthian Dukes of Spanheim. In the first half of the 13th century they conferred town privileges on the settlement on the Ljubljanica River. In approximately the same period, a stone-built fortress was erected on the Castle Hill to better protect the town; together with the two extensions of the town walls, it closed the fortification ring of Mestni trg (Town Square). In 1335, the castle, as the seat of Carniola was transferred to the Habsburgs, thereafter remaining their hereditary property for several centuries.

The present castle, historically the third one, was built by the Duke, later Emperor, Frederick III. It was erected in the 15th century after its predecessor had been completely destroyed. With the exception of the outer walls, the castle chapel, the corner towers and two entrance towers, the rest of the buildings originated in the 16th and 17th centuries.

As late as 1848, the appearance of the castle was enhanced by the dominant watchtower replacing the wooden one, which gave the present architectural ensemble its final form and the castle its characteristic silhouette, corrected in 1990s.

During its long and varied history, the castle was mostly a military fortress, but also functioned as the seat of provincial rulers, with the city tower being used by pipers and fire guards. In spite of all this, the role of the castle gradually dwindled, as did the strategic importance of the fortress and walls. In 1814, it was rescued from total destruction by a governmental decree to turn it into a penal institution. In 1905, the castle was bought by the City of Ljubljana and turned into multi-residential building for the citizens, but mainly for prisoners and the poor.

Since 1988, the Municipality of Ljubljana has been carrying out continuous archaeological research at Ljubljana Castle, which confirmed the continuous settlement of the hilltop.

In the 1930s, Jože Plečnik's idea was to build a new conical parliament to replace the castle, but he managed to realise only Šance (the redesigned remains of the fortifications) and the avenue. The first renovation work was carried out in the 1940s according to town planner Boris Kobe. Among recent renovation works, that carried out in 1964–2004 by architects Miha Kerin, Majda Kregar and Edo Ravnikar gave the castle a new steeper roof, a higher watchtower, new access and a regulated defensive corridor around the margin of the former fortified walls, linking the renovated castle structures together. 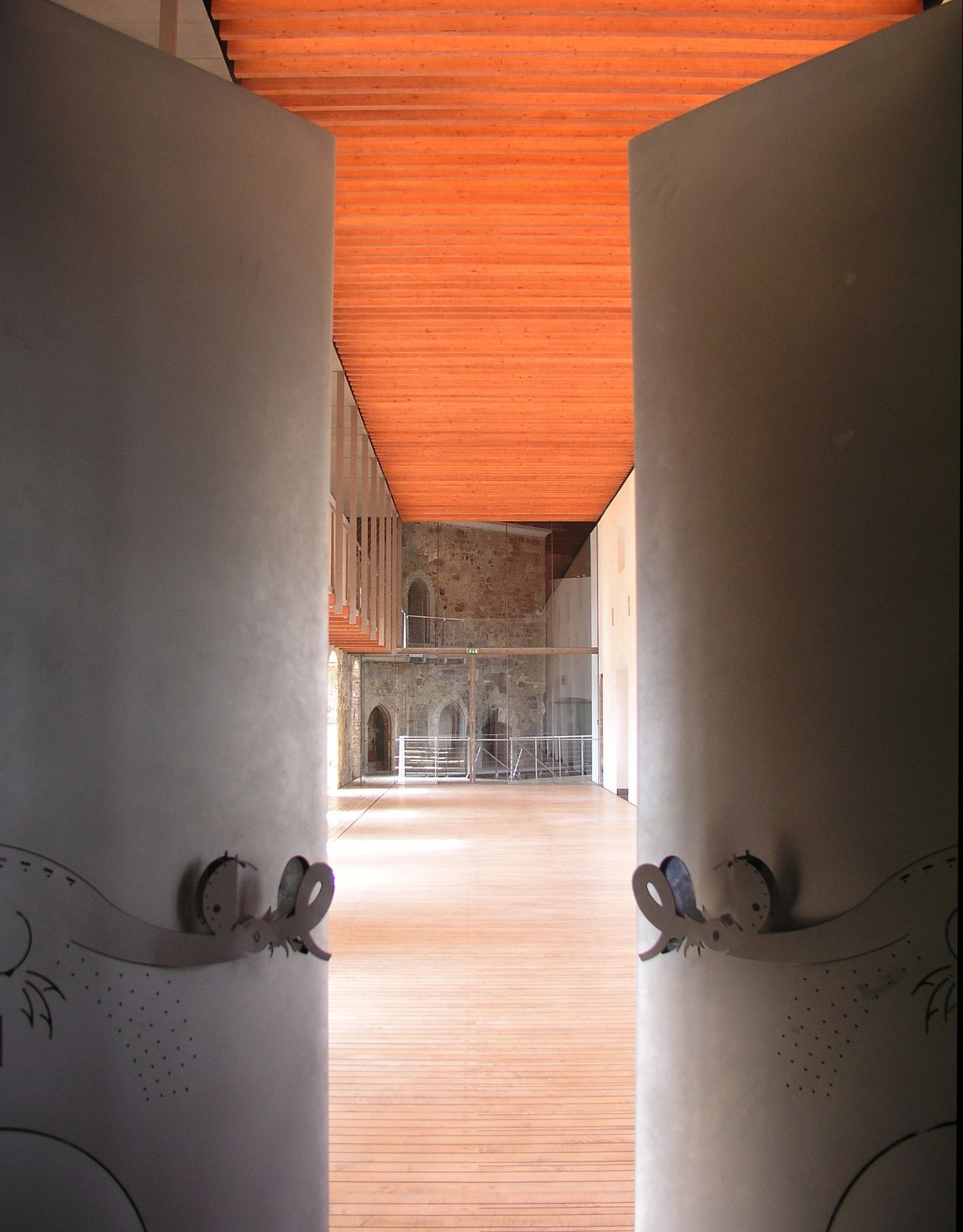 At the end of 2006, the Municipality of Ljubljana connected the Ljubljana Castle with the historic city centre by an urban means of transport: a funicular railway. The ride up the slope of the Castle Hill has since then been included in a regular guided walking tour of the city organised by the Ljubljana Tourist Board. The lower station of the funicular railway is located at Krekov trg (Krek Square), next to the Ljubljana Puppet Theatre, just across from the city's open-air marketplace.

The castle offers a tourist viewing tower, a virtual museum, a chapel and several cultural venues: Hribar's Hall, Palatium, Pentagonal Tower, Rocks Hall, Estate Hall, White and Blue Halls, Erasmus Tower, Archers' Tower and Pipers' Tower. Cultural events, such as Gustav Film's Comedy under the Stars and film screenings, such as Kinodvor Cinema's popular Film under the Stars during the summertime, also take place in the castle courtyard. In addition to performing arts and film events, temporary exhibitions, as well as some permanent exhibitions featuring the history of the city, are also displayed at Ljubljana Castle.

The Museum of Puppetry, a joint project of the Ljubljana Puppet Theatre and Ljubljanski grad Public Institute, has also been set up at the castle premises, now giving visitors young and old a new reason to venture up to the Ljubljana Castle. 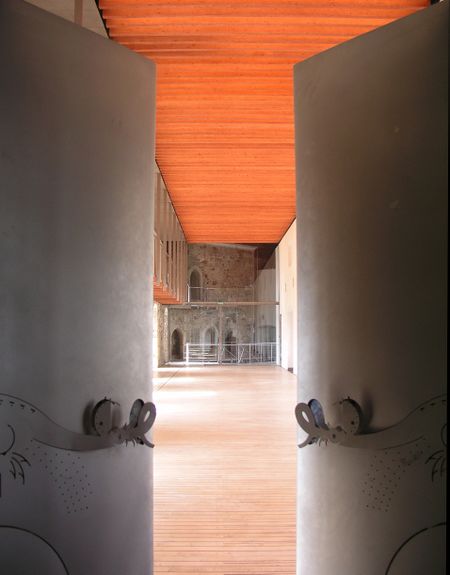 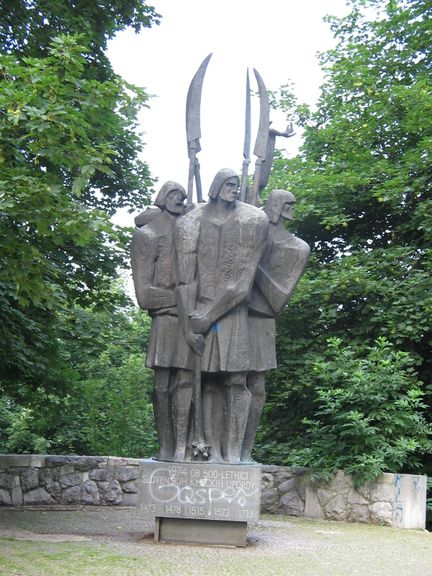 Monument to the Slovene peasant revolts at Ljubljana Castle, made in 1973 by famous Slovene sculptor Stojan Batič 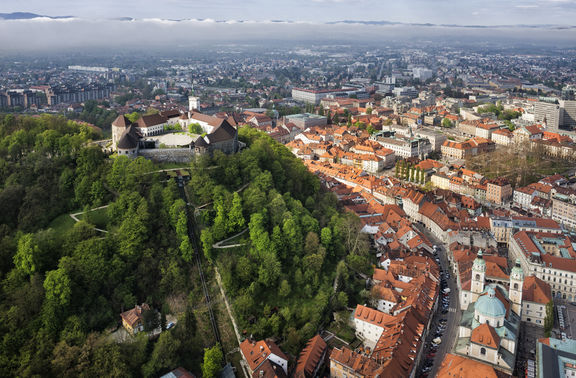 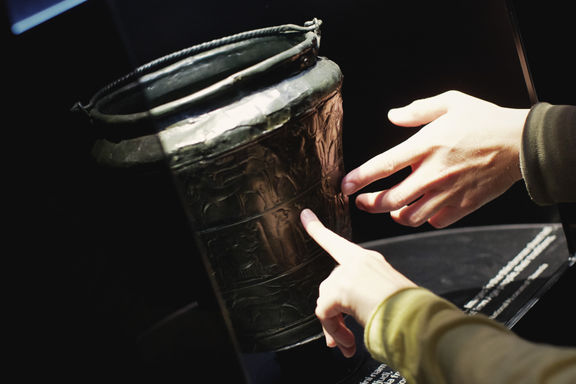 The bronze situla from Vače (500 BC), an original housed at the National Museum of Slovenia, is accessible to wider public at the Ljubljana Castle as a part of the Slovene History exhibition, 2010 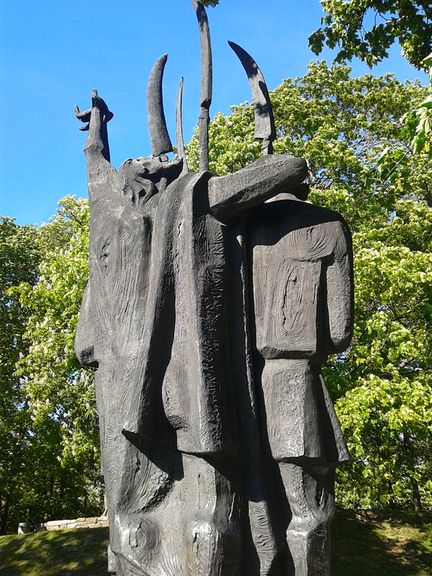 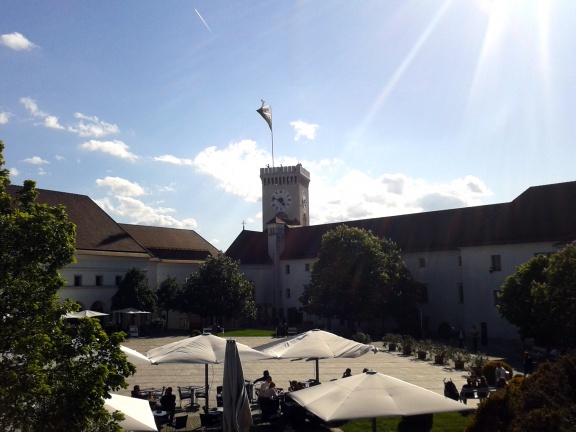 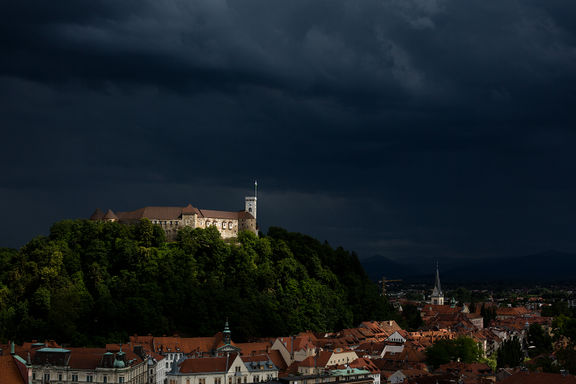 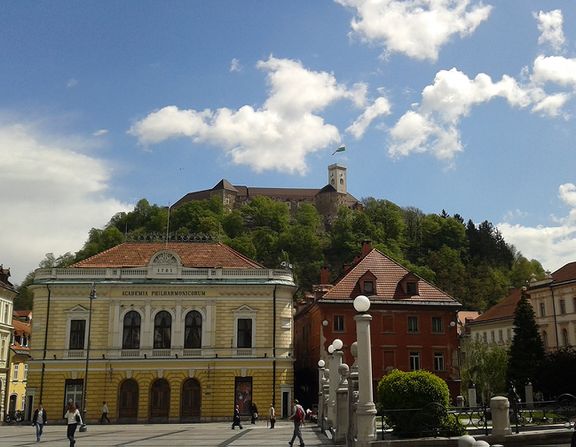 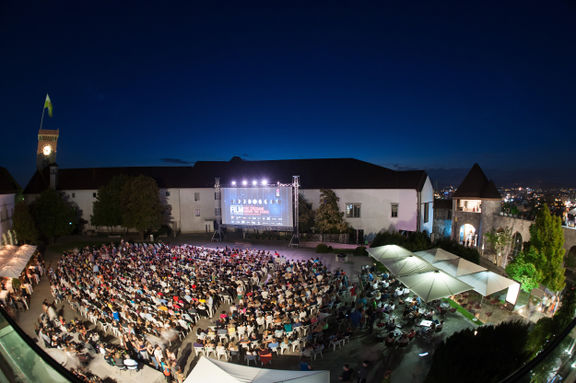 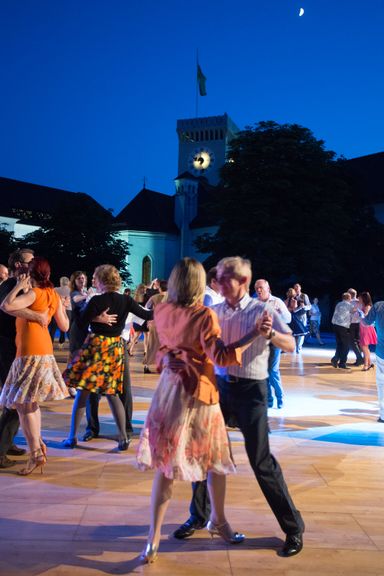 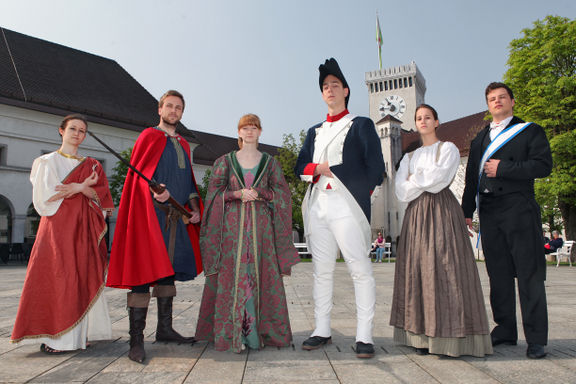 Time Machine project revives the history of the castle. Organised by the Ljubljanski grad Public Institute, 2014 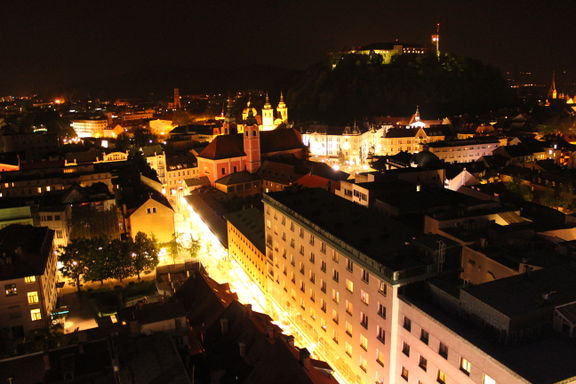