Nada Žagar Youth Club (Mladinski klub Nade Žagar) is a club in Ilirska Bistrica, a small peripheral town in southwestern Slovenia. As such, this club is rather remarkable in that it runs a very strong musical programme, frequently hosting very renowned bands from abroad. Furthermore, MKNŽ – as this club is acronymed – has been setting up such a programme for close to four decades, since the start of 1980s. During its more than half a century of history, it hosted more than 1500 bands.

The venue, accommodating some 200 people, is mostly used for live gigs. The place is of a non-profit nature and is run by a community of volunteers that harbours a strong do-it-yourself identity.

Nada Žagar Youth Club was established in 1966 as a youth club and was named after a WWII war hero. During the first two decades or so, the club was used for various cultural and social activities. However, with time the place started to incorporate somewhat more left-field cultural currents (from graffiti art to punk music) and up until the 1990s it was predominantly a venue for hard-core and garage rock'n'roll. It also to used to be the place were music zines were created and distributed.

Even though the place was stationed at the periphery, far from any urban centres, it was nevertheless able to fill the auditorium. This was not only due to a uncharacteristically big underground music community but also the fact that even the resident of Ljubljana and Koper, both much bigger cities, were regularly visiting MKNŽ gigs.

Today MKNŽ caters to a wide range of genres even if hardcore, punk and rock'n'roll remain its forte. Concerts at the MKNŽ featured the likes of Alboth! (CH), Blood On The Saddle (US), Helios Creed (US), Tromatism (FR), Hellcrusher (UK), The New Bomb Turks (US), Teengenerate (JP), Human Error (US), Anarcrust (Nederland), Cement (US), Hammerhead (US), Mule (US), Today Is The Day (US), Jeff Dahl (US), Dirt (UK), The Harries (NL), God Bullies (US), Cop Shoot Cop (US), Distract Vibes (Netherlands), Verbal Assault (US), DI (US), Inferno (DE), V-PUNK (DE), The Pietasters (US), Vandermark Five (US) as well as many Slovene and ex-Yugoslav bands.

In recent years it hosted D. I., Hard Ons, Oi Polloi, The Lombego Surfers Hiatus, Doom, The Abigails, Burning Heads,Raketkanon and most of the underground Slovene rock bands. The later is also due to the fact that MKNŽ is a regular venue for the Club Marathon, organised annually by Radio Študent (RŠ). In recent years MKNŽ started organising a complementary event to the Garage Explosion Festival, called Garage Explosion Afterparty, hosting some of the bands invited to the festival that otherwise takes place in Maribor.

There are also occasional other events taking place at MKNŽ, from film screenings to travelogues, workshops and lectures.

In 2016, the club had a 50 year anniversary that was marked by a week long celebration, featuring concerts, screenings and a photography exhibition. The latter was also presented elsewhere, for example in Klub Baza Ajdovščina. 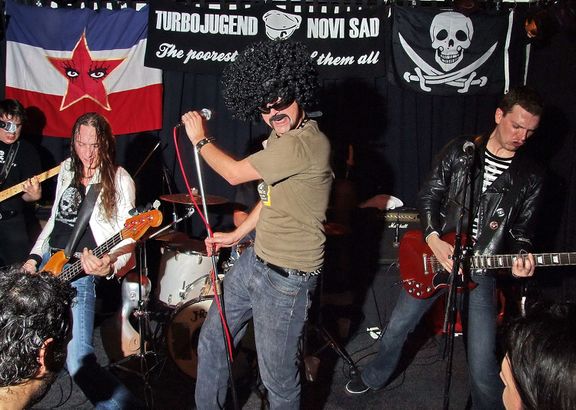