From Culture 2000 to Creative Europe

The European Commission’s launch of its new funding scheme (Creative Europe programme, 2014–2020) seemed a good opportunity to collect and analyse the related experience of the Slovenian culture, film and audiovisual sectors in the period 2002–2013. The Cultural Contact Point Slovenia and the MEDIA Desk Slovenia offices (today united in Creative Europe Desk Slovenia – CED) have joined forces with the Culture.si team and prepared a few interactive charts under the title Kultura!/Culture!. What have we learned?

1. Culture, film and AV media in one picture.

Project Culture! is the only analysis known to us that has used data from both sectors (culture and film/AV media) in order to get a comprehensive picture of the EU fundraising experience of Slovenia (the administrative divisions and pigeonholing usually obscure the view). In 12 years, 606 projects by 159 Slovenian organisations have been awarded a grant in the previous versions of the Culture and Media programmes of the EU.

The centralised Culture and MEDIA EU programmes were “established to enhance the cultural area shared by Europeans” and to strengthen the European AV sector, and the fundraising results based on a national level can only be evaluated by comparison. Nevertheless, our chart which shows all the funded projects by field reveals a notable growth in number over the years, evidence to the increase of participation and success of the Slovenian producers. Consequently, more and more cultural producers, institutions and artists have interwoven (new) international partnerships in their management; gained new experiences and competences and thus professionalised; gained international visibility and recognition. Furthermore, the chart reveals another phenomenon: while the number of the film and AV projects (in blue) grew almost constantly, the number of awarded projects from other cultural fields varied from year to year. Why is that?

2. A transparent matching funds policy by the Ministry of Culture stimulates cultural organisations to apply for EU funding.

The existence of matching funds seem to be a critical issue as the administrative procedures in the domicile country are rarely tuned with the European Commission’s and the number and value of sponsorships are decreasing. Such uncertainties can be regulated by a transparent national co-financing policy. In the years 2006, 2007, and 2010, the Slovenian Ministry of Culture introduced a special matching funds grant scheme for projects supported within the previous Culture 2000 and Culture programmes. A successive increase in the number of EU grant winners from Slovenia supports our claim. In 2013, the Ministry re-established such a co-funding mechanism, for the first time also for the MEDIA grantees. Hopefully, it will become a fixed and regular system since the positive effect of such a mechanism is clear.

On the other hand, in the ever-changing audiovisual field, strongly influenced by the digital shift, the MEDIA 2007 programme in recent years offered some new possibilities for different audiovisual players to garner support. Using the available opportunities, Slovenian film and AV organisations – even if acquiring the sufficient matching funds at home met with difficulty – proved that their projects were on the European level: the number of EU granted audiovisual projects grew slowly but steadily.

3. EU titles and the rotating presidency stimulate the interest for cultural cooperation and partnerships.

Several EU grant programmes for culture are based on partnerships and Slovenia may not be on the top of the list when looking for a new partner. However, in 2004 Slovenia joined the EU, in 2008 it held the Presidency of the Council of the EU, and in 2012 Maribor with several other partner cities was designated European Capital of Culture. Our results show a relation between these highly exposed events and the number of Slovenian cultural organisations involved in the EU-supported projects.

4. Private organisations are agile, public institutions still to catch up. 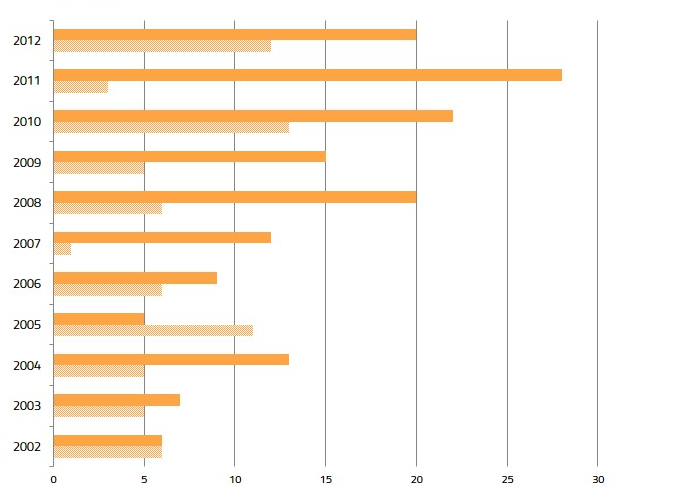 The non-governmental organisations (in orange) seem to be more proactive in raising funds from the cultural EU programmes. It would be interesting to analyse the reasons for this phenomenon. Has it become a part of the survival tactics of NGOs? Or is it perhaps rooted in their core proactivity principles (choosing their own missions, projects and partners)? What if the non-governmental cultural organisations were the first to internalise the idea of arts & culture as transnational human activities and have served as vanguard carriers of the European Union’s initial intent to produce “the emergence of European citizenship”? Indeed, a rich avenue for further research!

The success of the Slovenian cultural producers and institutions stands out also as a high ratio between the number of applications and approved projects. It was acknowledged by the Adam Mickiewicz Institute in its publication Culture Programme 2007-2013 in Poland – analysis and summary (2013) and the British company Euclid singled out Slovenia in its ConDo #011: Good for Slovenia – Analysing Applications to the EU Culture Programme 2007-2013 (2014). Both analyses, however, are based exclusively on the Culture programme data and do not include the film and AV sector.

Genuinely, the Polish, British and Slovenian attempts to analyse the EU cultural funding are rare birds and therefore extremely valuable. On the other hand, they can only provide a partial contribution to get the whole picture of the benefits and impacts of the long-term EU cultural funding. Each of the three teams has been challenged by some serious data mining and methodological issues and has opted for a different approach. If you are interested in the details of our work and dilemmas, please, contact us.

The Culture! project is based exclusively on the publicly available databases of the projects/grantees awarded EU grants in the frame of the EU culture, film and AV programmes in the period 2002-2013 (Culture 2000, MEDIA Plus, Culture, MEDIA).