Laibach is a retro-avant-garde music group from Trbovlje, established in 1980. Probably the most internationally acclaimed Slovene band, Laibach works as a "gesamtkunstwerk", dealing in multidisciplinary art practice and mixing their music with visual and video art, as well as with heavy political (and philosophical) undertones. The band is well known for their subtly crafted cover versions, often used to subvert the original message or intention of the song.

Since the beginning the group was associated and surrounded with controversy (their name being the historic German version of the name for the Slovene capital Ljubljana), provoking strong reactions by political authorities in former Yugoslavia. However, as of the 90s onward the band functions as a well known art institution in Slovenia and abroad. 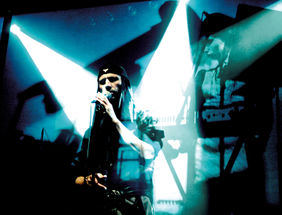 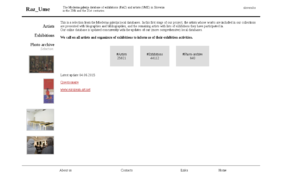 The Modern Art Archive, Museum of Modern Art department collects printed matter and press clippings related to exhibitions of Slovene artists (digitised with the special Razstava (“Exhibition”) software programme). It has also built an archive and press clipping service of articles containing biographical and bibliographical and also other data on Slovene 20th- and 21st-century artists (digitised with the Umetnik (“Artist”) computer programme).

A selection of the two databases is available online through the Raz_Ume Database. It currently contains over 13,500 artists, more than 8,300 exhibitions and 170 photographs. (Interestingly, Raz_Ume is a play on words using Raz from Razstava, "exhibition" and Ume from Umetnik, "artist" to create the Slovenian expression "He/She understands".) The database is synchronised with the Web Museum repository, archiving digital audiovisual contemporary art and time-based art.

This category has the following 35 subcategories, out of 35 total.