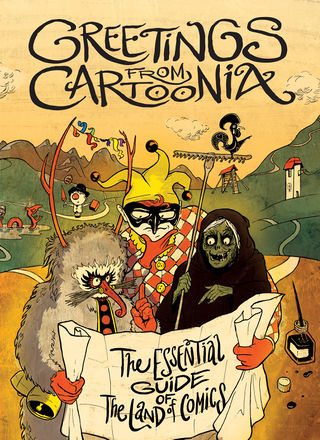 Launched in 1992 by Strip Core, Stripburger is a pioneer of publishing independent comics in Slovenia. With around 70 editions behind it, Stripburger is today still the only Slovene alternative comics magazine featuring works by both Slovene and foreign comic authors, complementing them with news and reflections on comic arts. Being multilingual, it has developed into an important resource on the international (especially European) comic scene, and is also the most important source of information for foreign followers of Slovene comic art. Currently, circa two editions of the magazine get to be issued annually.

Alongside the magazine itself, Strip Core is publishing stand-alone comic books, original works as well as translations. Additionally, an important part of the magazine's activities is its focus on comic exhibitions in Slovenia and abroad.

This "kick-ass international comix zine (with a distinct Slavic flavour)" publishes comics in Slovenian, Croatian, Serbian and English, with some issues being in English only. To date Stripburger has featured artists from such distant lands as Brazil, Israel, Korea, and Kazakhstan, and has presented work by such renowned figures as Peter Kuper, James Kochalka, Aleksandar Zograf, Max Andersson, Jason, Edmond Baudoin, Stephane Blanquet, Lewis Trondheim, and Joe Sacco, to name just a few.

Occasionally, Stripburger releases special issues that focus on specific themes, among them ecology, sex, madness, radio and physical handicaps. One of them, Stripburek, was set up as a Eastern European anthology, featuring comics from Serbia, Croatia, Bosnia, and of course Slovenia. Regular editions sometimes include additional features like an Anti-nazi Calendar, Human Rights postcards, etc.

With its diverse activities Stripburger is exceptional also in the international sphere, not least because of its concern with border issues such as marginalised social groups, human rights, madness, war, and sexuality.

Varying in genre and expression,, Stripburger's four so-called Editions series are meant for stand-alone works by different authors. The Republika Strip edition was established in 2002 and is meant for publishing Slovene authors, among them Tomaž Lavrič, Ciril Horjak alias dr. Horowitz, Izar Lunaček, Marko Kociper, Matej Kocjan - Koco, Iztok Sitar, and many others.

The Ambasada Strip series presents translations of comics by foreign artists like Kim Deich, Simon Deitch, Gunnar Lundkvist and Max Andersson. Comic works for the younger generations fit into the scope ofMinimundus, and various other projects (that merge with poetry, music and the like) are done under the label O Editions. Most of these works are in Slovene, though some Minimudus pieces also come as bilingual.

Stripburger in motion by invida on Vimeo

In collaboration with the Vžigalica Gallery, City Museum of Ljubljana, and KUD France Prešeren Gallery, Stripburger celebrated its 18th birthday in 2010 with exhibitions, lectures, comic workshops, and with the première of the animated film Stripburger in Motion [Stripburger v gibanju] in Kinodvor Cinema. Stripburger often collaborates with the Slovene Ethnographic Museum, where in 2006 the internationally acclaimed anthology Honey Talks – comics inspired by painted beehive panels reinterpreting the 19th-century folk art with works by 12 comics authors – was exhibited.

In 2009, following a magazine issue of the same name, Stripburger organised the international exhibition Greetings from Cartoonia, done in collaboration with 6 European comic associations at the same venue. A similarly successful project is the exhibition Attention, Work!, which grew out of an issue called Workburger and in which about 50 comic authors from all over the world are featured.