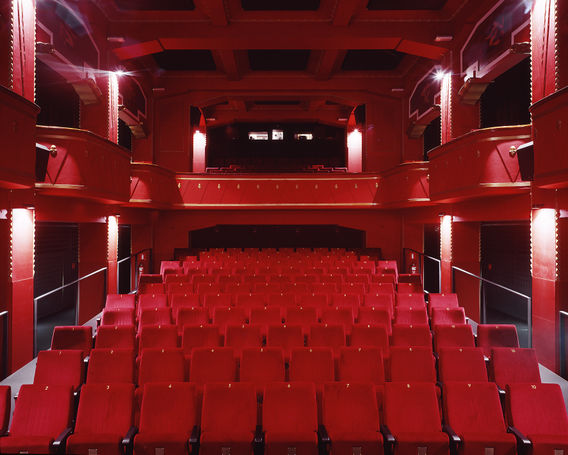 As one of the first cinema halls in Ljubljana (opened in 1923), the Kinodvor Cinema has throughout its history served as a commercial cinema hall, as a "Red Light" cinema hall, and as an art cinema. It reopened in October 2003, on the eve of the 80th anniversary of the original venue, after being completely renovated and technologically-upgraded. The refurbished theatre auditorium was named after Slovene director Žarko Lužnik and can accommodate 197 people. Kinodvor Cinema with a film bookshop and café is located in the centre of the city (in the vicinity of Ljubljana railway station). The films are screened in original language with Slovenian subtitles.

On the 15th Europa Cinemas Conference the Kinobalon, the youth screening programme of Kinodvor Cinema, won the Best Young Audience Activities Award for 2010.

Kinodvor: Presentation of the Ljubljana (Slovenia) City Cinema by Kinodvor on YouTube

The Kinodvor was run by Slovenian Cinematheque until a crisis arose in the spring of 2008 and it was closed down. In May 2008 the Municipality of Ljubljana passed a resolution declaring the establishment of a new public institute, Kinodvor. The hall was reopened in October 2008 as a public, municipal cinema, screening quality contemporary cinema. Through its functioning Kinodvor is meant to become part of a network of similar institutions operating in Slovenia and internationally. Apart from showing films Kinodvor works in the direction of film studies and cultural education; it offers pedagogical and educational programmes related to the field of audiovisual culture; it encourages participation, democracy, plurality, international cooperation, and high quality of creation and representation. Kinodvor is a partner distributor of European films through the Europa Cinemas network.

With the support of Europa Cinemas the international conference Networks and art cinema digitisation was held at Kinodvor in November 2009. Two years later, with the installation of BARCO’s 2nd generation digital cinema projector DP2K, Kinodvor has become the first cinema within the Art Cinema Network of Slovenia equipped for digital projection in formats of the highest possible standard.

The core and bulk of the Kinodvor film programme consists of first-run theatrical releases of quality films, as offered by Slovene distributors. European film, independent production, and world cinema are especially highlighted. 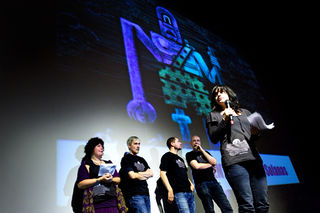 Besides the premières of the films released (often in the company of members of the cast and crew), the cinema offers gala avant-premières of nationwide releases. For those with limited budgets, the weekly Dvorni dan on Mondays with its reduced ticket prices, is the day to look out for. Every month a member of the Kinodvor Club has the privilege to select a recently released contemporary film for screening.

Sunday Breakfasts at Kinodvor offers freshly-baked croissant and coffee along with the ticket to the screening and expert baby-sitters to take care of the children while parents enjoy a film. Once per month screenings for parents with babies are organised: a regular run film is screened at a lower volume, the hall is gently lit and nursing allowed.

In addition the cinema features limited runs, temporary imported titles, reruns from art house repertories, and other special screenings and events. Kinodvor wants to position itself also as an event theatre.

Kinodvor also serves as one of the dislocated units for the International Film Festival Rotterdam. During IFFR Live a few films premiere simultaneously in over 45 cinemas throughout 17 countries, also in five cinemas around Slovenia.

Film Under the Stars

Since 1999 Kinodvor Cinema organises the Film Under the Stars cyclus of screenings on Ljubljana Castle on mid-summer nights. A program selection is carefully put together in cooperation with the Ljubljanski grad Public Institute of the Municipality of Ljubljana. Eventually, a few films premieres take place in the Castle courtyard, boosting the popularity of the open-air cinema on the Ljubljana Castle hill even more. 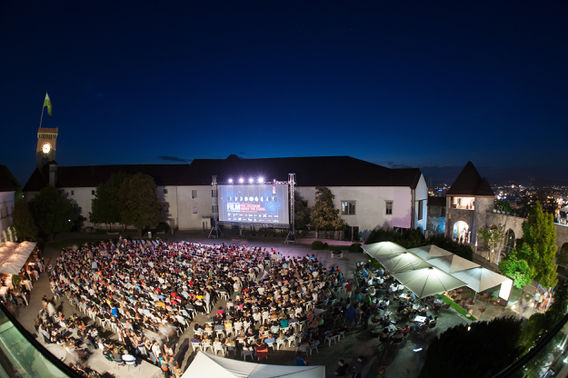 Kinobalon, the youth screening programme, is scheduled on Saturdays and Sundays (sometimes Sunday shows are accompanied by creative workshops), with occasional screenings during the week. Kinodvor Cinema offers educational institutions a catalogue of selected films with recommended additional activities; the screenings can be arranged according to their wishes throughout the year. The youth programme is carefully selected and takes into account various possible age groups and different kinds of cinema. On the 15th Europa Cinemas Conference the Kinobalon programme was bestowed the Best Young Audience Activities Award for 2010.

Kinodvor Cinema offers also Elephant, the educational animated film programme for diverse age groups. It features during the Animateka International Animated Film Festival but also as an ongoing activity within the Kinodvor Cinema programme as well as nationwide, facilitated by the Art Cinema Network. The common goal of these activities is to raise the awareness, training and education of the young Slovene audiences on the characteristics and requirements of the quality animated films.

The third such programme is Kinotrip, which is not only meant for youth between for 14 and 19 years, but also run by them.

With the opening of the city cinema, the first tiny film bookshop in Ljubljana opened its door to the public. Holding books ranging from specialised film pieces to the literary works that have inspired film production throughout the years as well as special programme-related offers, film DVDs and soundtracks, the bookshop is a must-see for all cinema enthusiasts. A specialised gallery presents fine art created side by side with, before or after films, and art which has supported, announced and challenged the films from which it has drawn inspiration.

Kinodvor Café represents a film-flavoured meeting point, a place where international film magazines broaden horizons and, most of all, a place with a selected offer of treats.

Program of animated shorts for children, Slonov tekmovalni I [The Elephant in competition I], Animateka, 2009

Premiere of the documentary In the year of hip hop in Kinodvor Cinema, 2011

Round table after projection of the Some other stories in the Kinodvor Cinema, 2011

Ivan Novak, Igor Zupe and Dejan Knez at the premiere of Music is the Art of Time 3, LP film Laibach, Kinodvor Cinema, 2018.

Open-air cinema at Congress Square, modelled after the âgrandâ open-air cinemas on Bolognaâs and Locarnoâs Piazzas, 2018.

The poster of the 8th Animateka, based on the graphic design by Max Andersson, an artist-in-residence at Animateka International Animated Film Festival in Ljubljana, 2011
Retrieved from "https://www.culture.si/w/index.php?title=Kinodvor_Cinema&oldid=272261"
Categories:
Hidden categories: