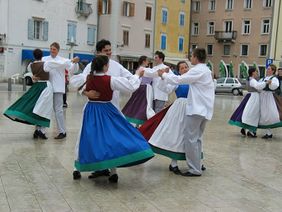 Established in 1961, the VAL Piran Folkloric Dance Group is one of Slovenia's leading folkloric dance troupes which has received many prizes and commendations from the Municipality of Piran-Pirano for its work. Each year the group performs widely both in Slovenia and abroad; it has been a regular guest at venues and festivals all over Europe and in Canada and is always featured prominently in the VAL Piran Association's own Mediterranean International Folklore Festival (MIFF).

Following the success of theirs debut features Idle Running (V leru, 1999) and Bread and Milk (Kruh in mleko, 2001) Staragara was established as an independent non-profit cultural organisation in 2003 by filmmakers Janez Burger and Jan Cvitkovič. Although it is primarly focused on film production (its unorthodox films have won numerous international awards), Staragara also produces commercial spots, contemporary dance performances by the choreographer Magdalena Reiter and occasionally organises special dance events and programmes.

This category has the following 19 subcategories, out of 19 total.

The following 63 pages are in this category, out of 63 total.