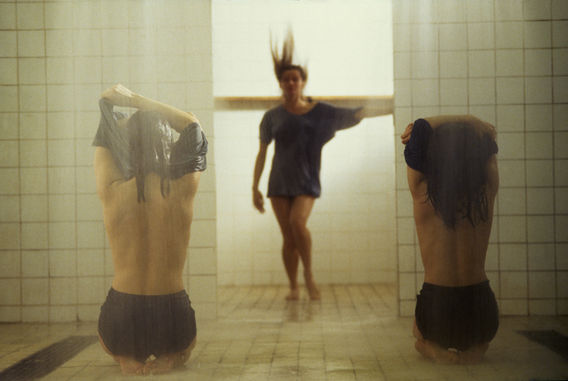 En-Knap Productions, a non-profit institution for the organisation and realisation of cultural events, was established in 1994, a year after the establishment of the international dance group En-Knap by the choreographer and dancer Iztok Kovač. Primarily a producer of contemporary dance performances, the organisation is also an active film and video producer.

Since its beginnings, En-Knap Productions acted as the producer of dance performances by the international dance group En-Knap, which was founded in 1993 by Iztok Kovač in Leuven, Belgium under the wings of the production-managing house Stuc and the Klapstuk Festival, Belgium. The group immediately gained wide recognition abroad as well as at home, while Iztok Kovač received the Prešeren Foundation Award for the group's first performance Spread Your Wings (You Clumsy Elephant) (1993) and for his acclaimed solo How I Caught a Falcon (1991). This was the first time that the highest national cultural award was given to an artist coming from the field of contemporary dance. The group's later productions, marked by their trademark aesthetic, have toured extensively and received numerous international and domestic awards, among others also the London Dance and Performance Award from Time Out magazine in 1993 for the solo How I Caught a Falcon and the Swedish Grand Prix International Video Dance Award in 1996. In its first decade, En-Knap Productions has also produced works by other artists, such as Mala Kline, Andreja Rauch, Maja Delak (all former collaborators of En-Knap), Hanna Preuss and others.

In 2007 En-Knap Productions established EnKnapGroup (EKG), the first permanent professional contemporary dance group in Slovenia, including an international team of dancers. The group, selected via auditions, has worked with an array of prominent international and domestic co-producers, choreographers, and directors and has been steadily building up its repertoire of successful and critically acclaimed contemporary dance and theatre works that are shown at prominent venues and festivals around the world.

In the 25 years of En-Knap Productions' activities, the institute has collaborated with over 50 international and national co-producers, recieved numerous (international) awards, and organised over 90 workshops, master classes, and auditions, in which over 3000 dancers and other artists have participated.

En-Knap Productions filmography includes six dance films and six documentaries, most of which were made in collaboration with the Slovene film director Sašo Podgoršek. The award-winning En-Knap dance films are without exception filmed on locations in the Slovenian mining town of Trbovlje and include Vertigo Bird [compare Vertigo Bird] (1996), which received the Award for Best Film at the Festival of Slovenian Film and the Springdance Cinema Award in Holland; House of Freedom (2000), both directed by Sašo Podgoršek and featuring choreography by Iztok Kovač; the short film Taming the Time (2000), directed by Dan Oki, a Croatian film and video artist; What Are You Going to Do When You Get Out of Here? (2006) and Vashava (2014), both recipients of multiple awards at the Festival of Slovenian Film. En-Knap's film production is supported by the Slovenian Film Centre.

What are you going to do when you get out of here? by knapeci on YouTube