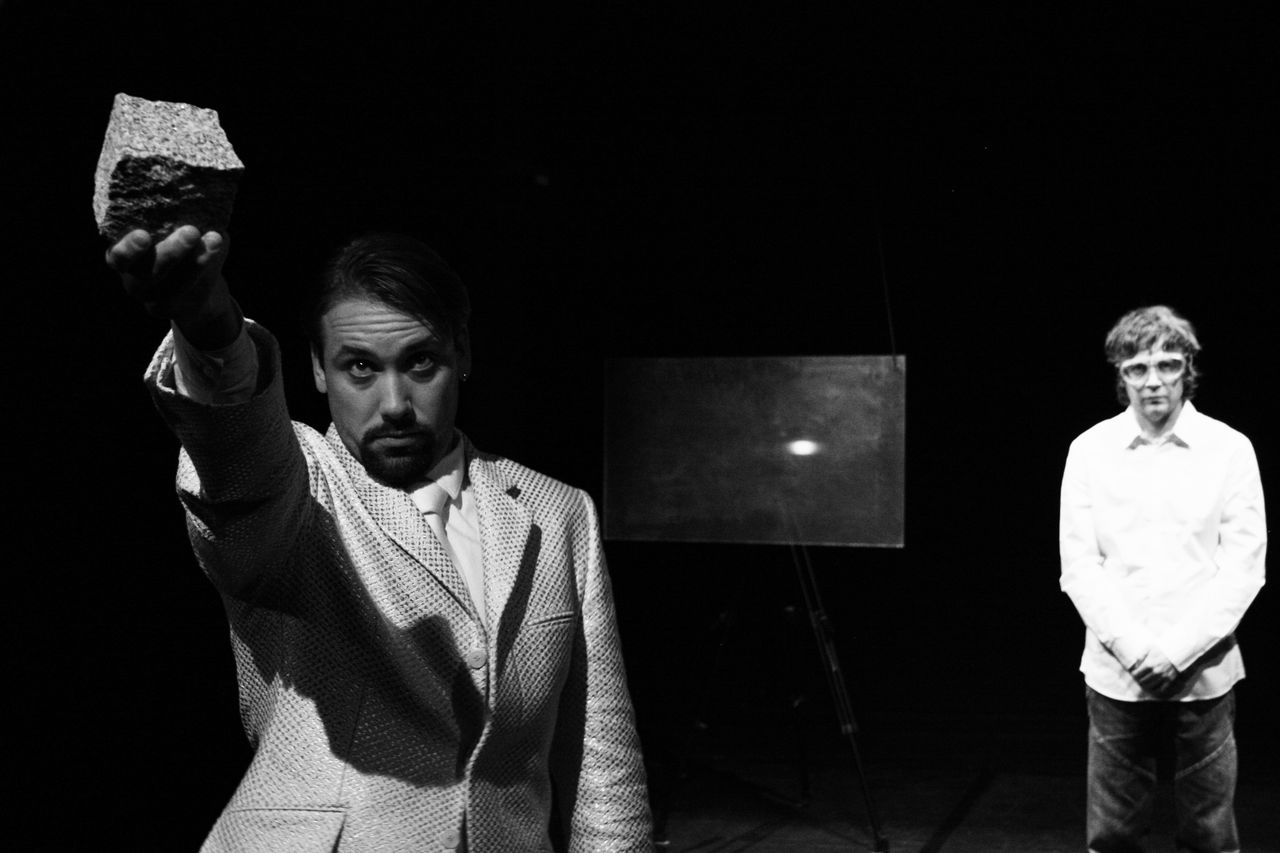 Established in 1970, Glej Theatre is the oldest independent performing arts venue in Ljubljana. An important theatre production and education institution, Glej has been striving to explore theatrical practices in novel and daring ways ever since its early days. It remains a place open to unorthodox approaches and theatrical research, fore-fronting the upcoming generations of artists.

Glej, which first emerged under the name "Experimental theatre Glej", was initially a response to the need for an alternative space for independent theatrical productions in Ljubljana. It was founded by a group of directors – who were inspired by the evolving experimental theatre approaches and who also introduced them into the Slovene space – among Lado Kralj, Dušan Jovanović and Zvone Šedlbauer. The name of the theatre (which can be translated as "Look!", "See!" or "Behold!") is a nod to the notions developed by the American theatre theorist and director Richard Schechner.

Works that did not (and do not) fit into the existing institutional theatre structures are Glej's staple. Already in its formative years it staged a number of highly acclaimed performances, most notably Bojan Štih's Monument G (Spomenik G, 1972), directed by Dušan Jovanović, and Milan Jesih's The Bitter Fruits of Justice (Grenki sadeži pravice, 1974), directed by Zvone Šedlbauer, which strongly influenced the theatre production in then-Yugoslavia.

During the 1980s, the theatre slowly moved away from radical experimental production. However, it retained its main orientation towards emerging and innovative authors able to offer new aesthetics and emphases. In the coming decades, it collaborated with a number of (still influential) directors and authors such as Vinko Möderndorfer, Eduard Miler, Iztok Kovač, Matjaž Pograjc, Matjaž Berger, Igor Štromajer, Jernej Lorenci, Tomi Janežič, Sebastjan Horvat, Diego DeBrea, Ivana Djilas, Ivica Buljan and Emil Hrvatin, to name but a few.

A rather small place in the old city centre, Glej has profiled itself as an alternative theatre of a diverse nature, setting up "devised theatre" alongside classical dramatic works, puppetry and even dance performances. It fosters numerous collaborations with Slovene as well as international organisations and often lends its premises for various independent artistic productions and festivals. Its challenging performances are frequently invited to international festivals, collecting several awards. 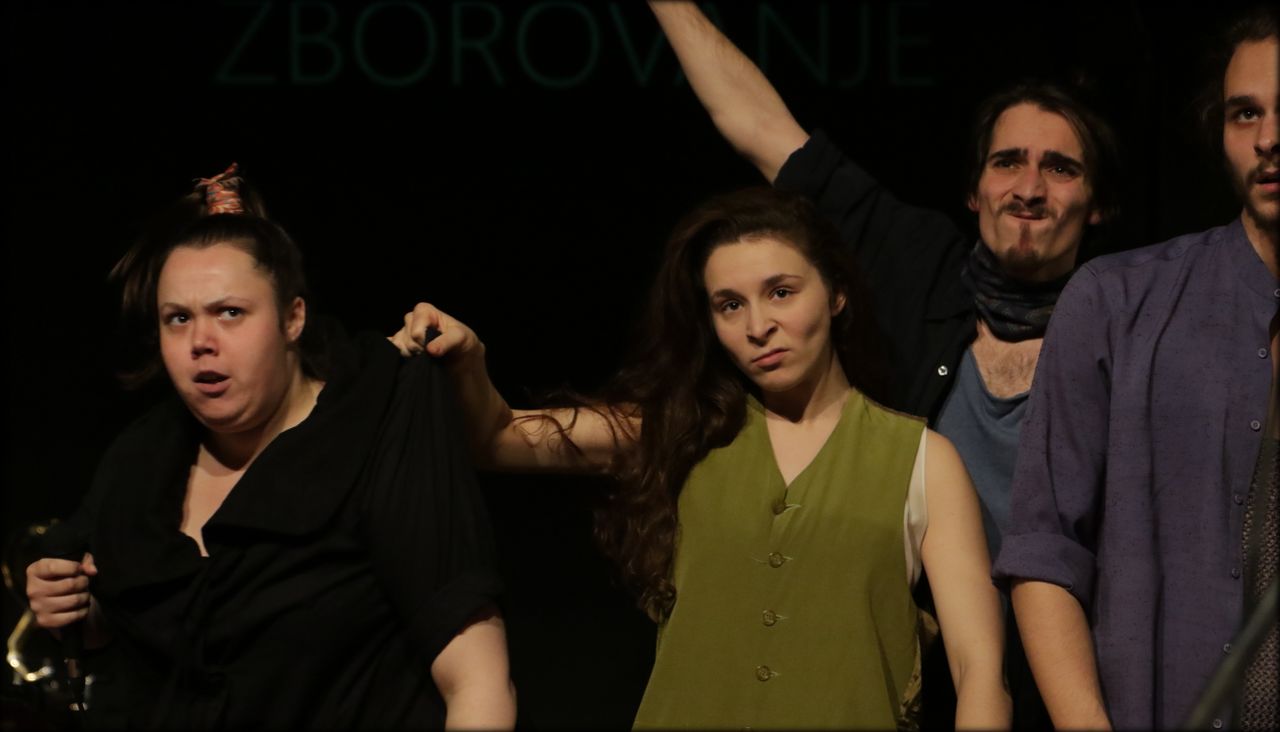 The conference of the birds, performance directed by Nina Rajić Kranjac; at Glej Theatre, 2015.

As of the 2016/17 season, the theatre is led by a collective body, an "artistic council", which comprises personnel from different fields (production, criticism, public relations and organisation) and cooperates with the artists from conception to post-production to foster collaboration and safeguard high-quality art production. This gives Glej the flexibility to swiftly respond to any potential initiatives and needs in the theatre community.

The theatre annually produces or co-produces several performances of different genres and styles. To counter hyper-productivity and fragmentation of the contemporary performing arts scene, Glej aims to develop and offer sustained support to artists (both those with established careers and those who are new to making work) by providing them the conditions for continuous production and opportunities for future work (also outside of the production itself, through education and visiting projects). 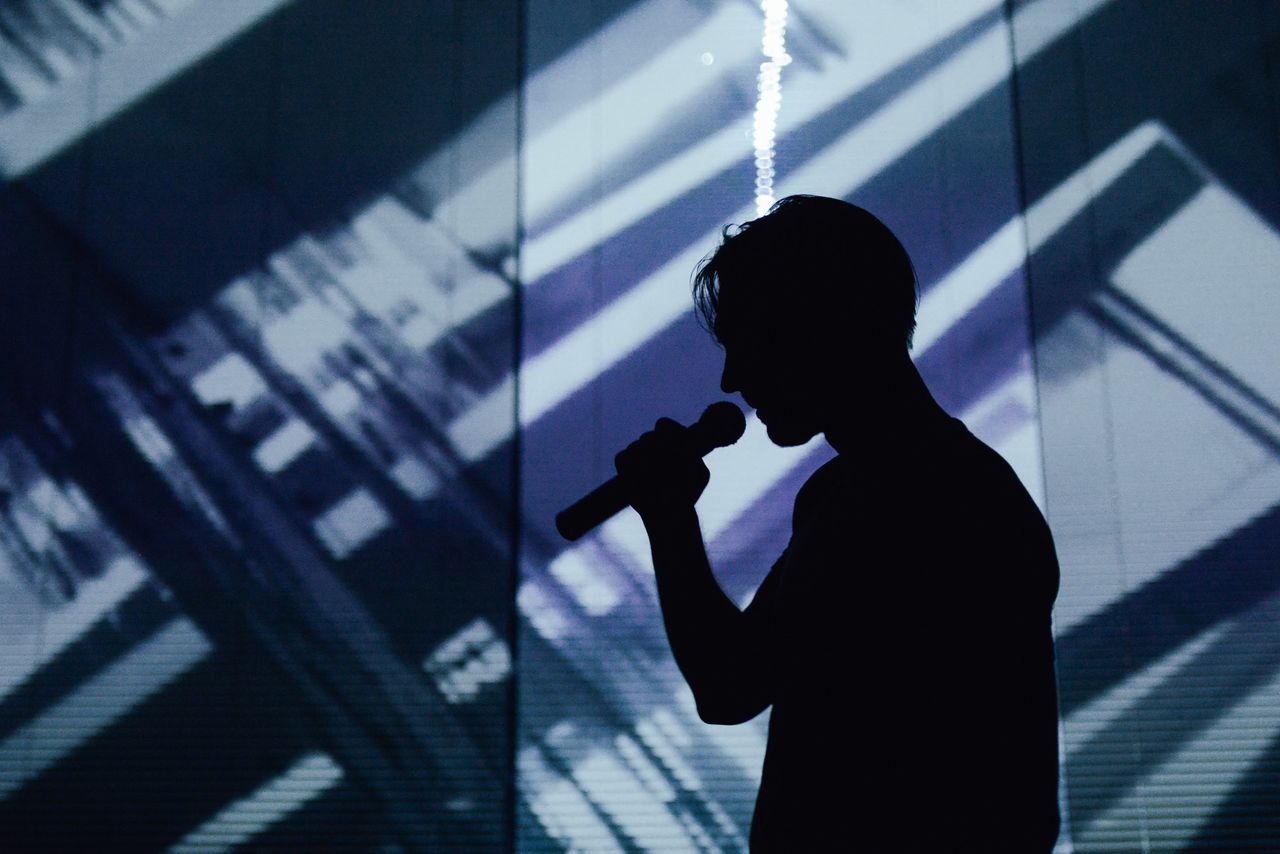 As of 2013, the theatre runs Glej, Resident, a unique residency programme offering upcoming artists the opportunity to research, develop and produce their own poetics over a period of one year as an antidote to the prevailing fast-production models. Glej also runs a platform for short experimental theatre pieces, regardless of whether they are completed works or works in progress, called Glej, Miniatures. Glej strives to keep its programme structure open also through a year-round open call for theatrical and multidisciplinary projects.

Glej Theatre frequently collaborates with other institutions, be they fellow theatres or those coming from other artistic fields. One of its more striking collaborative enterprises is Transferzala, a combined season ticket for six independent Ljubljana theatres: Mini Theatre, Dance Theatre Ljubljana, Španski borci Culture Centre, Stara Elektrarna - Old Power Station, Vodnik Homestead and Glej Theatre. It is also one of the producers of the Trigger Festival.

Glej also publishes a journal called Glej, Paper, reflecting on the state of contemporary theatre and on how this particular theatre house deals with it.

Glej differs from other theatres in Slovenia by its unique way of identifying and addressing challenges in the performing arts community in Slovenia. (It has initiated a number of platforms that were later used by major institutions, one of them being the now defunct PreGlej na glas! Playwriting Festival, meant for the development of quality Slovene playwriting.) Recognising the urgency for addressing the needs of less privileged social groups (teenagers, seniors), Glej runs the Generation 2 Generation programme, with partners from the Netherlands, Belgium, Bosnia and Herzegovina, and France, which aims to culturally empower these groups by developing their skills and offering them suitable contents. To this purpose, the theatre runs the project ŠtudenTeater (StudenTheatre), which encourages and facilitates cultural production amongst students who are not studying at the Academy of Theatre, Radio, Film and Television (AGRFT). Here its partners are GT22, the Slovene National Theatre Nova Gorica, Moment Arts and Culture Association and the Public Fund for Cultural Activities.

Regardless of particular endeavours, Glej, a member of the East European Performing Arts Platform (EEPAP), remains dedicated to young artists who often take their first steps in the theatre between the four pillars in Glej. 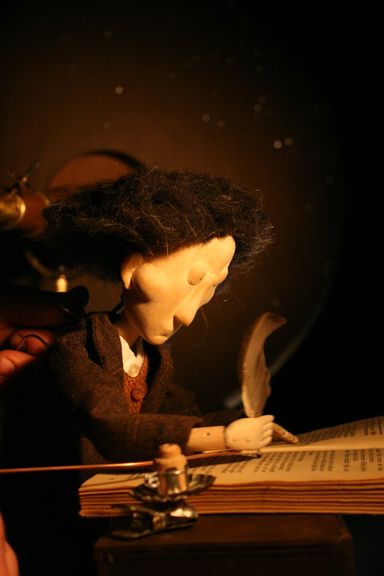 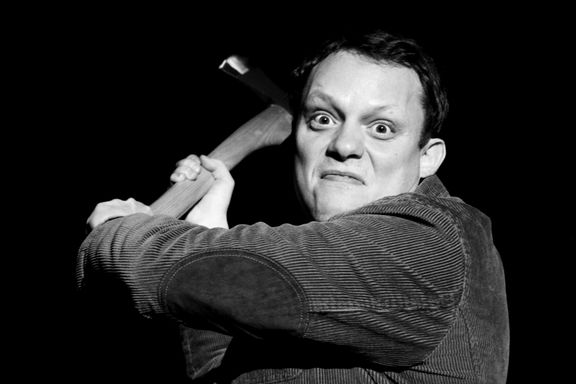 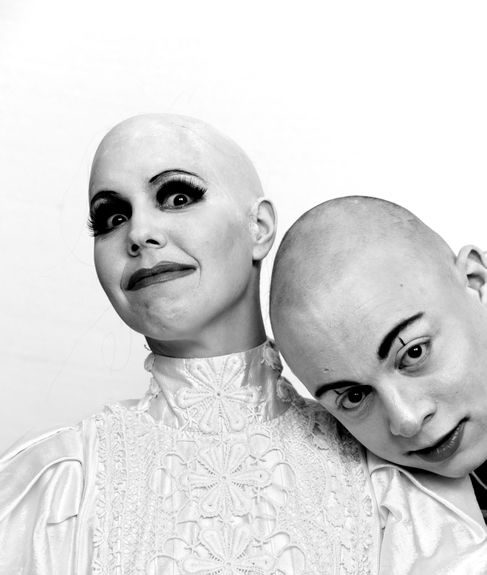 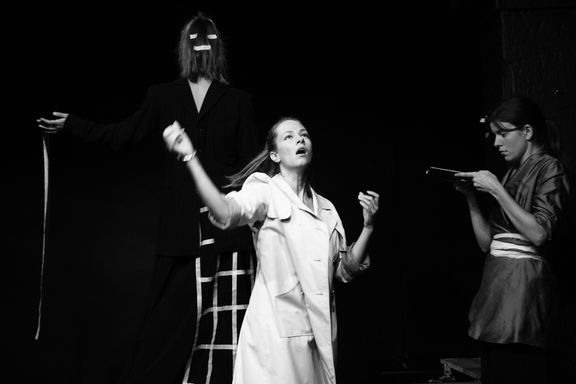 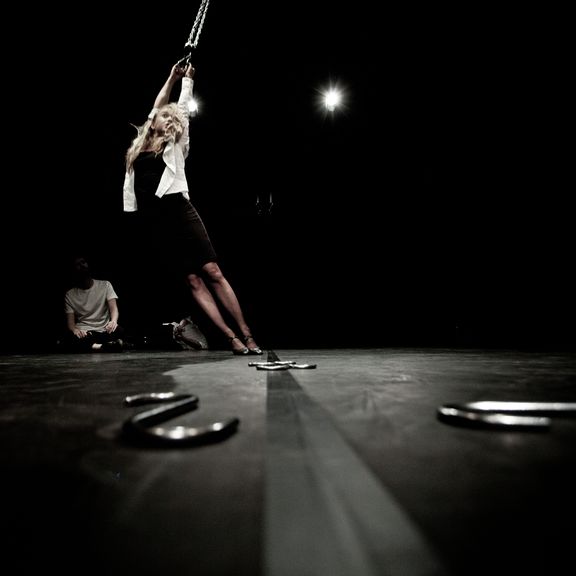 Butcher Shop, conceived and directed by Sabina Schwenner as a musical and physical operation for the dismemberment of everyday questions. Produced by Glej Theatre in 2011. 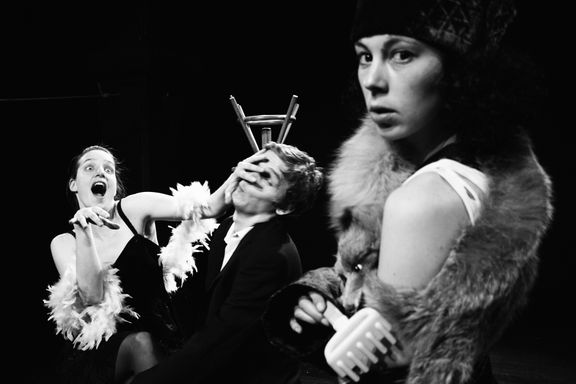 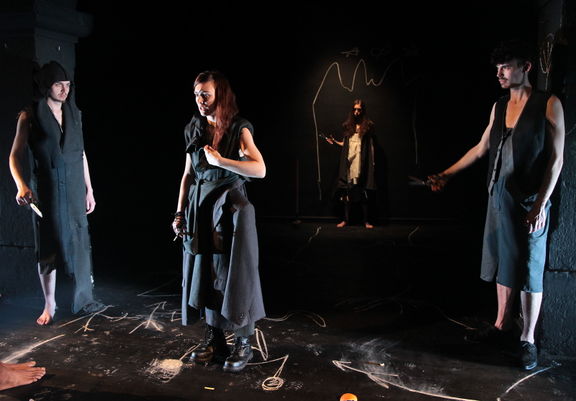 Prometheus: An apology for a split personality and a chorus of hungry men, based on Aeschylus' Prometheus Bound and Dostoyevsky's The Brothers Karamazov, directed by Simon Belak. Produced by Glej Theatre, 2013. 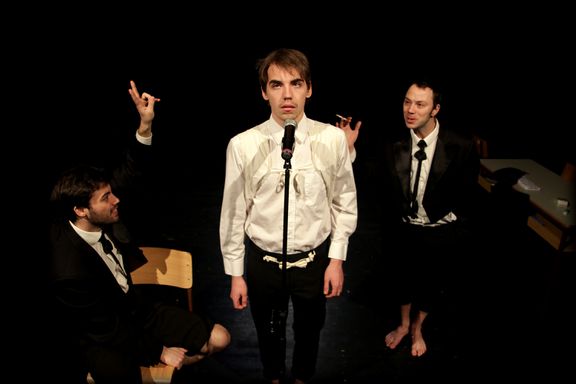 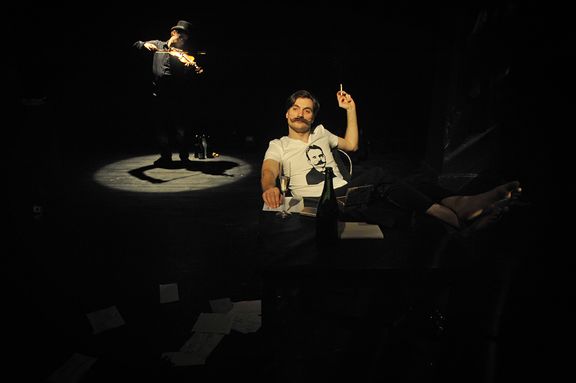 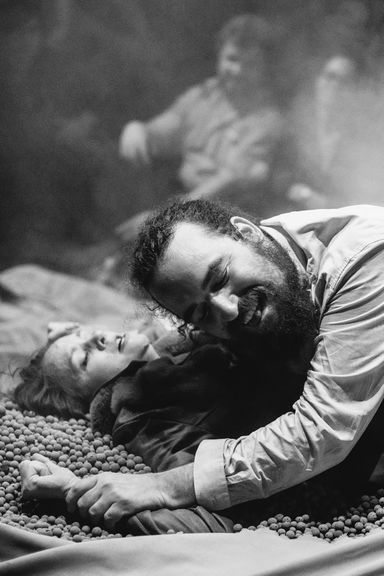 Katarina Stegnar and Jure Novak in a devised performance entitled Katarina on Demand at Glej Theatre, 2014. 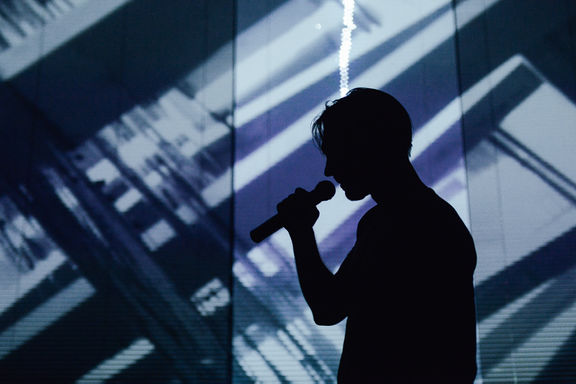 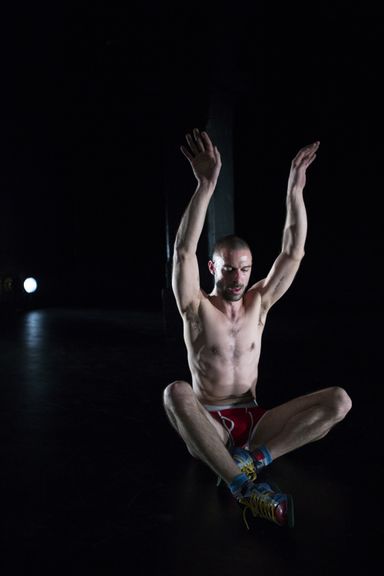 Sebastjan Starič in a devised performance entitled Razor: a duet for a performer and his character at Glej Theatre, 2015. 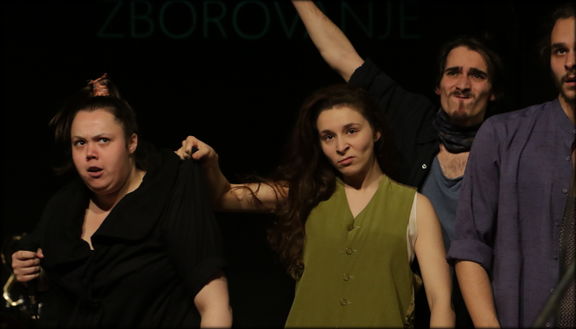 The conference of the birds, performance directed by Nina Rajić Kranjac; at Glej Theatre, 2015. 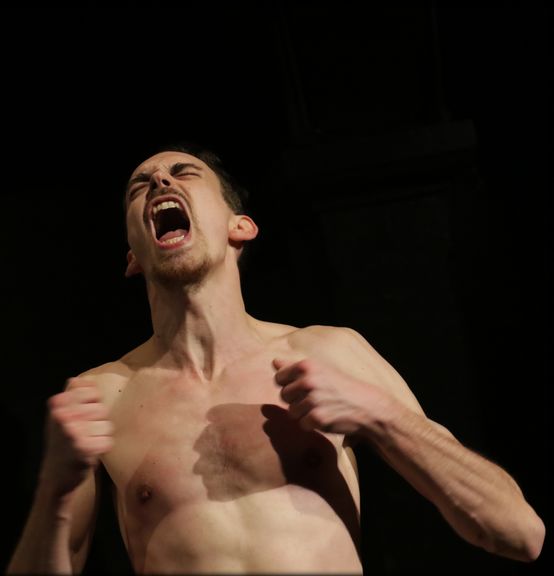 Performance The conference of the birds, directed by Glej’s 2015 resident Nina Rajić Kranjac at Glej Theatre. 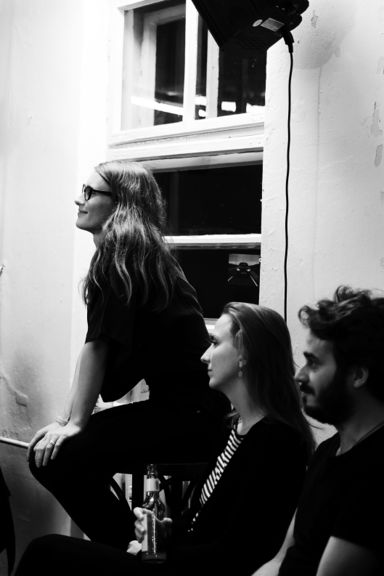 A Potential Performance by Urška Brodar and Eva Nina Lampič at Glej Theatre, 2016. 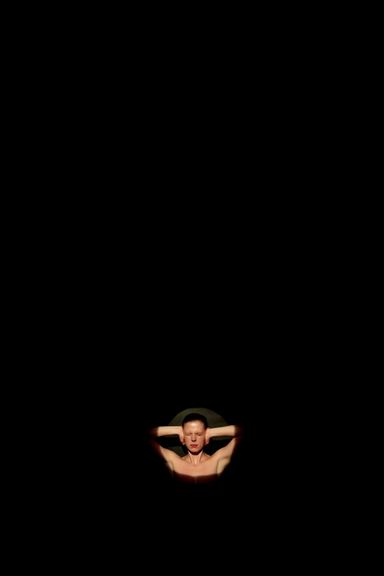 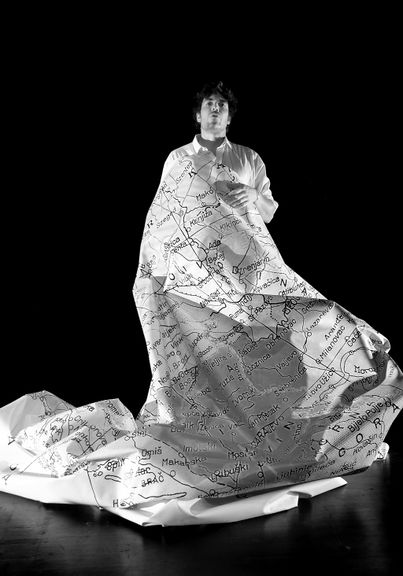 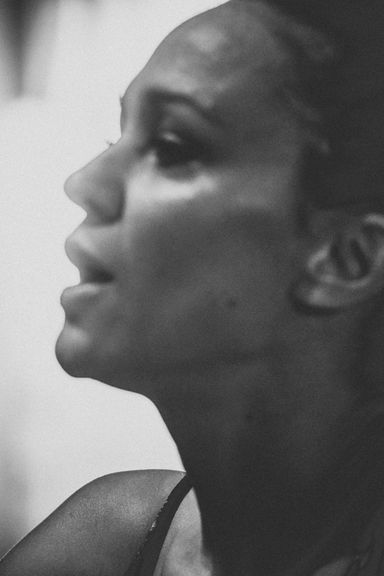 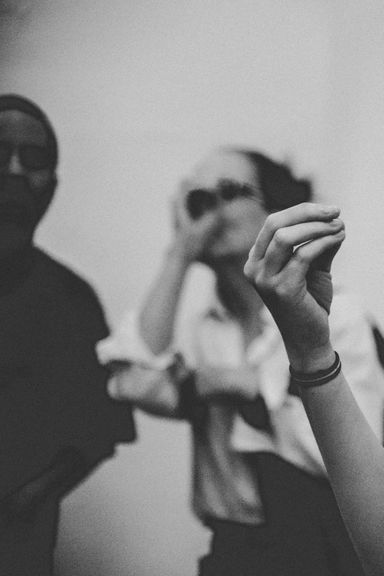 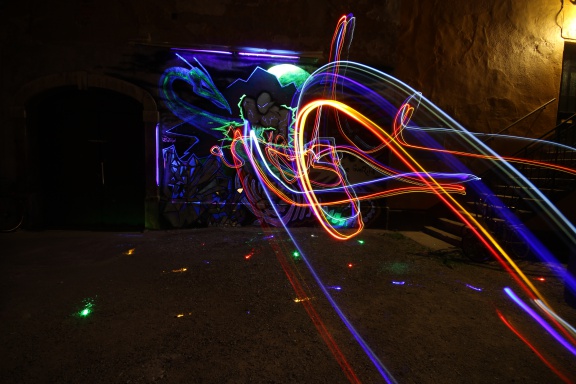 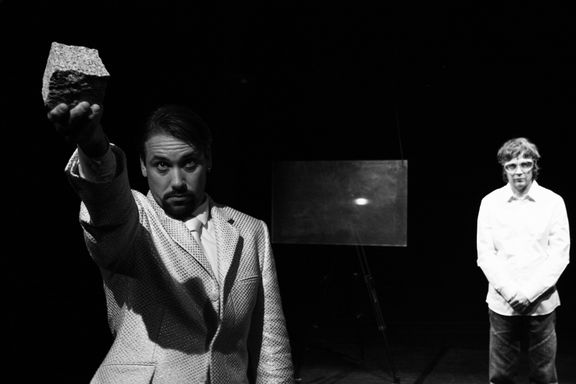