Dealing in experimental and technologically inquisitive arts, MoTA serves as a production vehicle for music concerts, audiovisual acts, visual art exhibitions, public interventions, art residencies and an abundance of other artistically-charged activities (as of 2017, it also bestows the TESLA Award). Its programme predominantly takes place at various Ljubljana venues, yet also on the web and very frequently around the world.

This non-profit cultural organisation was founded in 2007 as a continuation of the CodeEp art collective and enterprise. Besides partaking in various international endeavours, MoTA cooperates with dozens of Slovenian organisations, venues and festivals, among them Speculum Artium Festival, Ljudmila Art and Science Laboratory, Sploh Institute and Kino Šiška.

MoTA styles itself as a museum without a permanent collection or a fixed space, but as of 2013, it does run its own venue. First, there was the now-defunct MoTA Point, which housed a dense programme of concerts and exhibitions and was used as an occasional working space for resident artists and workshops. It closed in spring 2016, but a new location was established in the Šiška neighbourhood soon after, called the MoTA LAB.

Since its inception, MoTA has been running a diverse programme of concerts, focusing on contemporary electronica and improvised music. As a part of the Sonica Series, the Spring Festival (2001–2012) and several of its more sporadic projects, it booked the likes of Fennesz, Senking, Blixa Bargeld, William Basinski, Teho Teardo, Keith Rowe, Plaid, Clark and many others. In a somewhat different vein the Sonica Classics series stages artists like the minimalist pioneer Charlemagne Palestine, the idiosyncratic lute player Jozef Van Wissem, and the cellist Hildur Guðnadóttir. For a time, MoTA also organised live cinema events (held primarily at Kinodvor Cinema) called CinemaScapes. Some of the featured artists were Olga Mink and Scanner, The Kilimanjaro Darkjazz Ensemble, Mira Calix and Byetone.

Installations and other contemporary art projects

MoTa boasts an extremely varied programme of art projects that frequently, in one way or another, feature sound among their primary components. Some of the featured artists are Nonotak, Oliver Ratsi - ANTI VJ, Karina Smigla Bobinski, Nik Nowak, Jan Vormann, Les Liens Invisibles, Bram Vreven, Svetlana Maraš, the Greta Rusttt arts collective, Lenka Đorojević and Matej Stupica (who presented the OHO-awarded installation Nevromat) and Irena Tomažin (with her audiovisual installation Faces of voices / noise, inspired by the question "What would a portrait of a certain voice look like?"). Many of them were invited to hold lectures, set up workshops and cooperate in the Artist's Talk discussions. 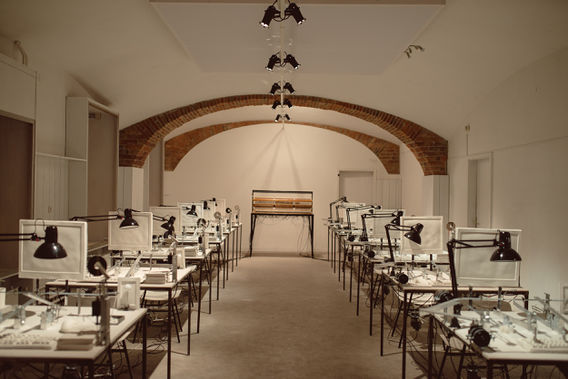 Martin Bricelj Baraga, the director of MoTA Museum, is a highly prolific author himself. His works are often large-scale installations set in public spaces and unusual architectural contexts.

Among his works are The Cyanometer, a monolith that gathers data of the blueness of the sky and the quality of air and visualises them; the Moonolith, an interactive monument that reflects the Moon and star constellations on its surface; the Darkstar, a large interactive piece on which more than 30 artists, programmers, architects and musicians collaborated; and RoboVox, an 8m-high robot set on a public square, to whom one could send telephone messages which he would then read aloud.

Bricelj Baraga collaborated with the renowned musician Olaf Bender (aka Bytone, DE) on a kinetic sound sculpture consisting of a matrix of 99 black balloons and called Neunundneunzig (99). He also collaborates with MoTA's producer Neja Tomšič on Nonuments, a long term project of research and artistic production that deals with monuments, landmarks and other symbolically-laden public spaces. In addressing this topic, Tomšič was awarded a fellowship at the University of Maryland Baltimore County, with which they realised the Nonument 01: McKeldin Fountain project in collaboration with Lisa Moren and Jaimes Mayhew at the Transmodern Festival in Baltimore.

MoTA has a longer history of representing artists abroad, starting with the director Martin Bricelj Baraga himself. Other artists collaborating with MoTA include Irena Tomažin, Miha Ciglar, and Neja Tomšič; they have been featured in the High Zero and Transmodern festivals (US) and hosted by the Current Gallery in Baltimore.

The year 2015 marks MoTA's semi-official entry into the art world as an agency, primarily with the aim of promoting the SHAPE platform artists (see below). The agency's profile is accordingly broad and features audiovisual works by the Serbian duo WoO and Incredible Bob, large public scale installations by Bricelj Baraga and Nik Nowak, the London-based club act Spatial, and a selection of sound-based gallery works – Faces of Voices.Noise by the vocalist Irena Tomažin.

Over the years, MoTA has established its so-called Impermanent Museum collection Arte/Facts. Featuring a selection of works by artists that they've worked with since 2007, these are not really works as such rather than parts or residues of the artistic process. Some of the artists included are Jan Vormann, Karina Smigla-Bobinski, Adam Basanta, Zimoun, Nik Nowak and Stephen Cornford. MoTA presents this collection at art fairs, among them, the Supermarket Art Fair in Stockholm in 2015. 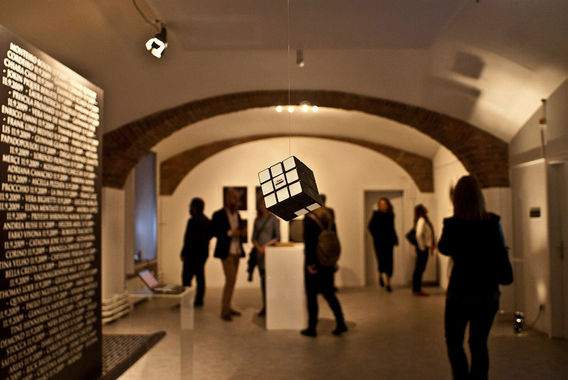 MoTA is (or has been) involved in various international networks and partnerships. Among them, T.R.I.B.E. – Transitory Research Initiative of the Balkans and Eastern Europe, which started as a residency network in 2012 and connected Ljubljana, Prague, Istanbul and Nicosia. It hosted more than 15 artists and researchers, organised two symposia and resulted in the publication Exercises in Transitory Art.

Another network in which MoTA is involved is Artecitya, which brings together artists, architects, town planners and citizens for, as they say, the aim of improving the quality of life in cities through technological and artistic innovations. Within Artecitya, MoTA is developing the Arcade Gallery, a sound gallery located in the centre of Ljubljana, which commissions sound compositions, especially for this location.

MoTA was also part of the ALIPI: Advancing Light-driven Public Interactions project, of the ICAS – International Cities of Advanced Sound network, of the GALA Green Art Lab Alliance project, the Swiss Music Day 2015, and numerous others. In 2017, it started with the MAPS – Mapping and Archiving Public Spaces, aiming to identify, map and archive public spaces that may be a part of our cultural heritage – yet identified as such.

Transitory network and the artist-in-residence programme

Since 2008, MoTA has been running an artist-in-residence programme in Ljubljana for media, sound or visual artists, curators and researchers. So far, MoTA has hosted and produced the work of more than 15 artists, among them Jorge Rodriguez Gerada, Felix Thorn, Julien Bayle, Lexa Walsh, Alex Toland, Gabey Tjon a Tham, Marina Rosenfeld, and Ohira + Bonilha. Some of these residencies have taken place in collaboration with Ljudmila - Ljubljana Digital Media Lab, for example, Nedine Kachornamsong and Yuri Landman. In 2010, MoTA established the Transitory Network of residencies in Eastern Europe.

The SHAPE project is a 3-year initiative that (re)unites 16 European non-profit organisations active within the ICAS – International Cities of Advanced Sound network to create a platform that aims to support, promote and exchange emergent musicians and interdisciplinary artists with an interest in sound. SHAPE stands for "Sound, Heterogeneous Art and Performance in Europe".

Forty-eight musicians and artists are chosen annually to participate in a mix of live performances, residencies, workshops and talks across member festivals and special events. Under the auspices of SHAPE, MoTA presented Slovenian SHAPE artists within the SONICA x Series in partnership with the Apiary Studios in London and Spazio Aereo in Venice.

In 2010, MoTA launched the project Artist's Talk, an online portal for publishing, disseminating and archiving high-quality video recordings of interviews and lectures given by artists, curators, theorists and others working in the fields of art, activism and theory.

Still an on-going series of live events, this initiative is a product of three contemporary art and new media centres from Eastern and Central Europe (MoTA Ljubljana, CIANT Prague and WRO Wrocław). It is based on the idea of the free distribution of ideas and knowledge. A partial result of the interviews conducted as a part of Artist's Talk is the book Outerviews, first presented at the 15th WRO Media Art Biennale in Wrocław. 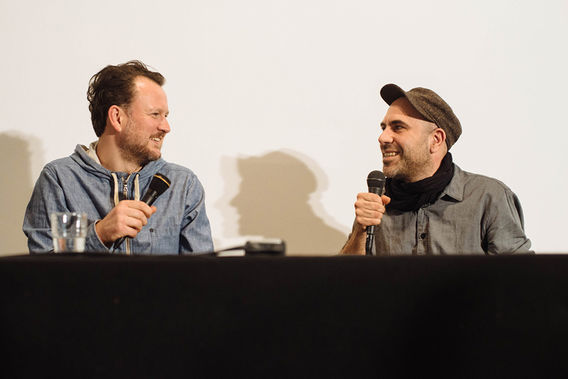 In 2009, MoTA and the Museum and Galleries of Ljubljana opened a reading room and mediatheque in the Jakopič Gallery, which consists of a vast collection of books belonging to Tomaž Brate (1963–2008) as well as the MoTA book collection. The reading room serves also as the MoTA info point with information on resident artists, current, past and future projects, and archives.

In 2013, MoTA Museum of Transitory Art invited the Berlin based artist Jan Voorman for a residency. The project he worked on at that time, called Dispatchwork, consisted of a series of somewhat surreal interventions into public space.

Martin Bricelj Baraga's project Moonlith, a Monument to the Moon and the Stars, presented at Ljubljana's Republic Square in 2015

The visual duo Izland, aka Gašper Milkovič Biloslav and Marko Vivoda, ran a workshop on analogue visuals at Sonica, 2015

Created by the artist Stavinsky, the Black and white Rubik’s Cube functions as a "minimalist meditation on the radical repolarisation of the east and west of the postcoldwar Europe".

A 3.3-metre installation dubbed Cyanometer, created by Martin Bricelj Baraga. Located at the Ajdovščina Square in Ljubljana, it is 'measuring the blueness of the sky' as well as showing data on air quality and the main polluters.

A light installation, set up by the duo Nonotak at MoTA Lab during the 2016 edition of the Sonica Festival

For the Sonica International Festival of Transitory Art's closing night, MoTA opened its new space to the public with the Sonic Pavillion exhibition, 2016.

MoTA LAB first opened its doors during the Sonica Festival in 2016. The place then exhibited site-specific installations by Staš Vrenko, Nonotak (FR), Nikola Uzunovski (MK), Anne Katrine Senstad (US) and others.

Radical Ear 02, workshop led by Lawrence English where participants got the necessary expertise from the fields of field recording, sound documentation, manipulation of field recordings and sound archiving, 2017.

Moderator Luka Zagoričnik and the three speakers were joined onstage for a discussion by Matt Spendlove aka Spatial, SONIC.ARCHITECTURES Symposium at Slovenian Cinematheque organised by MoTA Museum of Transitory Art, 2016.