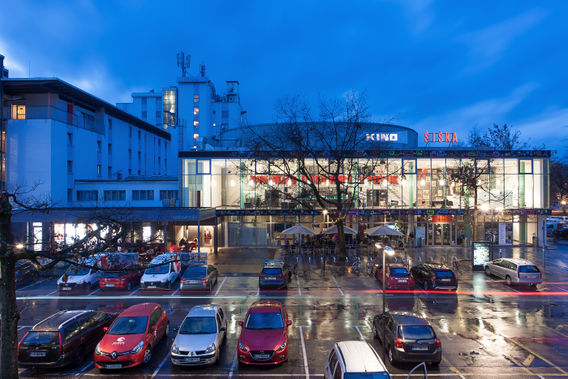 Kino Šiška is one of the main cultural centres in Ljubljana. Established in 2009, it is a highly industrious institution in terms of artistic scope, dealing with music, film, visual and new media art, theatre, and contemporary dance as well as with various other cultural endeavours. However, its main trade is that of music concerts, with the acts ranging from indie rock and alternative pop to experimental electronica and old school heavy metal.

Besides its 300 or so events per year, Kino Šiška also runs various programmes for finding and supporting upcoming artists, does international promotion for Slovene artists, runs a visual arts sales gallery DobraVaga, and collaborates with the local community.

Legally Kino Šiška is a public institution. It is an organiser, producer and co-producer of various events, but above all it functions as a programme manager and mediator between numerous concert organisers, booking agents, independent producers, artists – and also the demands and needs of the audiences.

Kino Šiška has two well-equipped and adaptable multi-functional halls: the large Katedrala Hall, which can hold about 900 standing visitors standing for music concerts, and the small Komuna Hall, accommodating up to 200 souls. The lobby in front of the Katedrala Hall serves as a flexible exhibition space and is named Kamera. The café is a popular hangout for the Šiška Cultural Quarter, with the courtyard in front of it also occasionally serving as a venue. 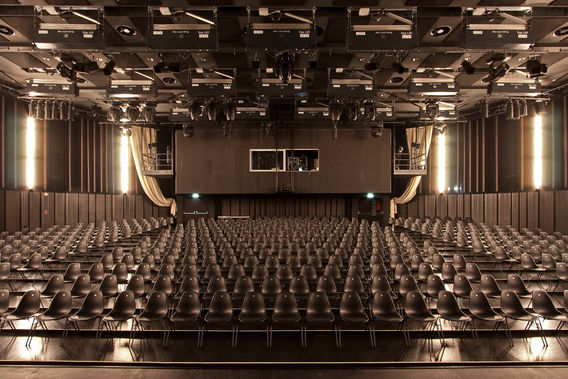 The name of the centre means Cinema Šiška, with Šiška being the name of its respective Ljubljana neighbourhood. The name was inherited from the building in which it is located, a cinema built in 1961 as one of the first Ljubljana buildings characterised by modernist architecture (the work of the Slovene architect Božidar Gvardjančič). In 2001, the cinema closed its doors for good and afterwards was sporadically used for various art projects, dance and theatre performances, workshops and so on.

However, after many years of public debates, civil initiatives and postponed public construction plans, the building was thoroughly renovated and the Kino Šiška Centre for Urban Culture was finally established by the Municipality of Ljubljana. It represents the biggest municipal financial investment into the Ljubljana cultural infrastructure in decades.

Music concerts are the main pursuit of Kino Šiška. The programme is very broad, though it does usually steer clear of the more mainstream productions. Indie, alternative, explorative, progressive and experimental expressions are its trade, even when talking about pop music.

It organises the highly renowned MENT Ljubljana international conference and showcase, sets up a cycle of primary and high school band concerts called Špil Liga, and partly co-produces a number of festivals, among them being the Druga Godba Festival and the Sonica International Festival of Transitory Art. It occasionally also sets up concerts outside its walls, at, for example, the summer auditorium Križanke or other festivals across the country. A number of outside producers regularly use the premises of Kino Šiška, among them the national radio Val 202 and the rock promoter Kataman.

With a special policy concerning their guest list (even the accredited pay a symbolic fee nonetheless), KŠ annually finances a project of up-and-coming selected artists via an open call (like the album release by Your Gay Thoughts, an intermedia project of Olja Grubić, and the contemporary dance performance Chorus). 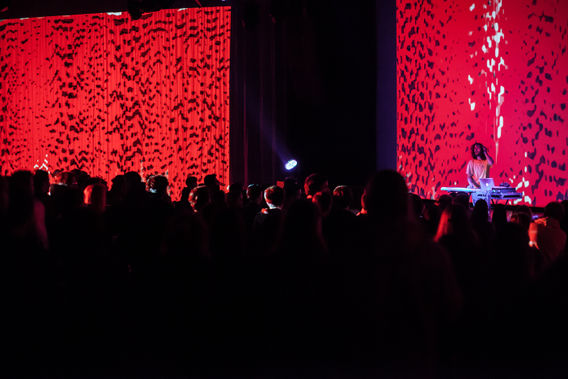 Kino Šiška leads the visual arts sales gallery DobraVaga, set in the city centre and especially focused on young artists. It is in a way a continuation of the year-long and rather packed Kino Šiška's art programme that forefronts young new media artists, illustrators, designers, comic authors, and others. Comics are in fact quite a thing here, and for many years the venue has served as a comic book shop. Now it hosts the comics focused Stripolis festival as well as a regular comics bazaar.

Some of the events hosted or co-produced by Šiška (as sometimes called by the locals) are the Independent Biennial, the Blind Date Convention, Festival of the Artist’s Book, and the Design Biotop. Other similar festivals very often also at least partly use the venue's infrastructure.

It should be mentioned that for a time Šiška co-produced the Slovenia Coworking programme, thus making it also the predecessor and godfather to the Poligon Creative Centre co-working space.

Many a new documentary or feature film by Slovene authors premieres at this former cinema, and its hall is a regular host for the Ljubljana International Film Festival.

It can be said that Kino Šiška's theatre programme is mostly comprised of the more experimental and often technologically elaborate productions. Relatively frequent are, for example, works by Vlado Repnik, GVR Institute or Dragan Živadinov of the Delak Institute.

Contemporary dance is also integrated into Kino Šiška's horizon and the annual CoFestival is one of bigger such enterprises in Slovenia. In the years 2010–2014 Kino Šiška was one of the 20 European dance venues (in 16 countries) participating in the Modul-dance cooperation project led by Mercat de les Flors from Barcelona, and funded through the EU Culture Programme. Its main aim was to facilitate development, mobility and exchange for dance artists.

Kino Šiška Centre for Urban Culture regularly participates in various European networks, and platforms, among them, the European Dancehouse Network, Liveurope, Trans Europe Halles, etc. It participates in various EU funded projects, among them Quantum Music (exploring the connection between music and quantum physics) and [modul-dance] (supporting the development and mobility of dance artists).

Since 2017 Kino Šiška with the MENT Ljubljana festival makes a part of the Innovation Network of European Showcases (INES), a platform consisting of eight European showcase festivals. (the leader of the project is GET a GIG GmbH (DE).

Some of the hosted festivals and producers

Klemen Klemen featuring in the concert by Ali En at Kino Šiška in Ljubljana, 2009

One of two technically equipped and adaptable multi-functional halls: the large Katedrala Hall can hold from 800 to 1000 visitors standing for music concerts, Kino Šiška Centre for Urban Culture

The main entrance to Kino Šiška, 2017

A compilation of posters of past Kino Šiška's events, changed every few years or so, 2017

The back entrance to Kino Šiška Centre for Urban Culture. Back when Kino Šiška was a cinema, this was where you left the auditorium after the movie ended, 2017.

During the day the entry lobby of Kino Šiška Centre for Urban Culture is a bar, often populated by the denizens of the Šiška Cultural Quarter, 2017

The garden in front of Kino Šiška Centre for Urban Culture, 2017

The exhibition space known as Kamera in Kino Šiška is most often used for exhibitions and lectures, 2017

The small hall of Kino Šiška, called Komuna, can host about 200 people. It is mostly used for concerts, lectures and round tables.

Mina Špiler, a vocalist preforming with the Laibach group in concert at Kino Šiška in Ljubljana, 2012

Concert by Mudhoney in Kino Šiška in Ljubljana, 2009