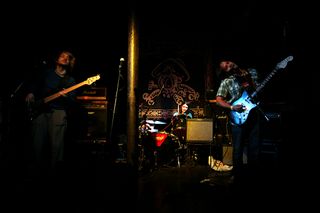 Dandelion Children had their first public appearances in 2006, at that time as a brother-and-sister duo which a year later expanded into the present trio formation. The founding members were Jure and Katja, with the former on guitar, bass guitar and vocals and the latter on drums. At first they played covers of bands like (not surprisingly) the White Stripes but soon turned towards making their own songs, especially after the coming of the third member Anže, who also switches between guitar and bass guitar. Since then, the band has recorded well over a hundred songs, forming an eclectic repertoire and sometimes a hard rock synthesis of blues, ska, reggae, surf, psychedelics, alter and progressive rock, country and metal. This in mind, reviews of Dandelion Children most often remark on their "grunge" sound, which partly stems from the very distinctive lead singer's way of singing.

The band has already shown a great deal of self-initiative, with a little less than a dozen self-released albums, most of them studio recorded. All of them are freely available for download on their website. Their writing and recording hyperactivity is accompanied by frequent live gigs. The band has played both in a number of smaller clubs and also on many festival stages like Rock Otočec, FV Music Festival, Lent Festival, Mars moon Fest (Croatia), Lampijončki, PungArt, and Majske igre. In 2010, they won the Rockizziv [Rockchallenge] and Šourock competitions, which led them to some of the above mentioned festivals and to some other high profiled gigs. Their performance on the Slovenian Music Week convinced the delegate of the Exit Festival to invite them to play on the prominent event in 2012.

In 2014, they were chosen by Radio Študent to be a part of the Festem project and have played gigs in Bordeaux, Madrid and Ljubljana.

It should be mentioned that besides playing in the band and being responsible for its lyrics, Jure is also involved in another project and has so far released two solo albums. Both can be downloaded from their website.