Due to difficulties with renting the festival area, in 2013 the festival was transferred to Ljubljana, where actually its flair could not be revived. See below the archival article. 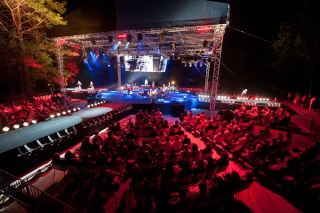 Held at the Aerodrom near Novo mesto, Rock Otočec is the country's largest summer open air music festival. It combines rock with blues, world music and other genres. The festival lasts for three days in the end of June or the beginning of July. Novo mesto is located 70 kilometres from both the Slovene capital Ljubljana and the Croatian capital Zagreb. The festival area can accommodate up to 30,000 visitors. It is famous for its games in the mud and is thus claimed to be a kind of Slovene Woodstock.

Rock Otočec first occurred in 1976, the second one in 1983, and since 1997 it has become a regular annual event. About 1,500 artists from twenty countries have already performed at the festival. Apart from the almost comprehensive list of Slovene bands, some international highlights include Rollins Band, Living Color, the Fun Lovin' Criminals, Asian Dub Foundation, Papa Roach, and many more. 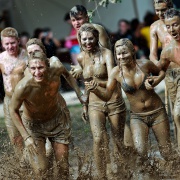 The mud puddle fun at the Rock Otočec festival, 2009

A premiere of Two Men With Bombs, an art action directed by Matjaž Berger and produced by Anton Podbevšek Theatre, within the Maribor, European Capital of Culture 2012 programme and the Rock Otočec festival, June 2012
Retrieved from "https://www.culture.si/w/index.php?title=Depot:Rock_Otočec&oldid=180174"
Categories:
Hidden categories: