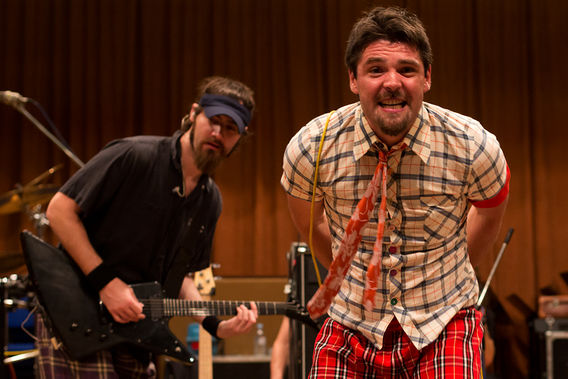 Elvis Jackson are a ska/punk/hardcore/reggae/metal band from the Northern Primorska region of Slovenia, founded in 1997. They combine their music with a great deal of humour and gags. Famous for their energetic performances that radiate positive energy, Elvis Jackson have performed with eminent names, such as Faith No More, The Toasters, Manu Chao, NOFX, The Offspring, Ska-P, Asian Dub Foundation, Sepultura, and Anthrax.

ELVIS JACKSON Wake Me Up! by Elvis Jackson Official on YouTube

Official video for "Wake Me Up" from Elvis Jackson's 2009 record Against the Gravity.

After hearing them play in Slovene clubs and at festivals, the owner of Rock'n'Roll Records invited the band to a studio in 1999 to record their first record Move Your Feet It's One O'Clock. They then toured Slovenia, Croatia, Italy, Switzerland, Germany, Austria, and the Czech Republic. In the same year the band created a soundtrack for the youth film The Angry, directed by Špela Kucler for Radio-Television Slovenia (RTV Slovenia). In 2000, the band made connections with the Swiss concert agency Stage Dive. The group was also included on the compilation No-fi Trash by Swiss record company Floppy Cow which also produced Lagwagon, No Fun At All, The Get Up Kids, and Hot Water Music. Elvis Jackson did a Swiss tour with the American band Goldfinger.

In 2000, their second album Go Home and Practice was released by Rock'n'Roll Records. The video for the song "Hawaiian Club" was directed by Ven Jemeršić of Perfo Production in co-production with Radio-Television Slovenia (RTV Slovenia). Elvis Jackson's music direction is firmly entrenched somewhere between punk, reggae, and metal and their main guideline remains to provide fun for themselves and their audiences. Their latest full-length album Against the Gravity was produced by Faith No More bassist Bill Gould and reviewed in international web media on Sputnik Music. They appeared on many international ska-punk compilations and their live gigs are notoriously wild and fun which is also demonstrated by their videos.

Elvis Jackson have made themselves feel equally at home playing large festivals and smaller gigs. The above mentioned album collaboration with Bill Gould followed one of the highlights of their career: being invited to perform as a support act for Faith No More on their reunion tour in 2009. The two festivals they played together in Romania and Bulgaria were very fondly accepted by the audiences and the band made friendly ties with Faith No More.

The band is always happy to play any charity event they get invited to and are adamant at promoting these events. Drummer Marko Soršak – Soki is one of the most acclaimed Slovenian drummers and he gladly shares his skills and knowledge as a private teacher at B.A.S.E. music school and at so called drum clinics that he – time permitting – organises throughout Slovenia. He is a local endorser for the Tama brand of drums and has recorded a DVD presenting the basics of modern drumming.