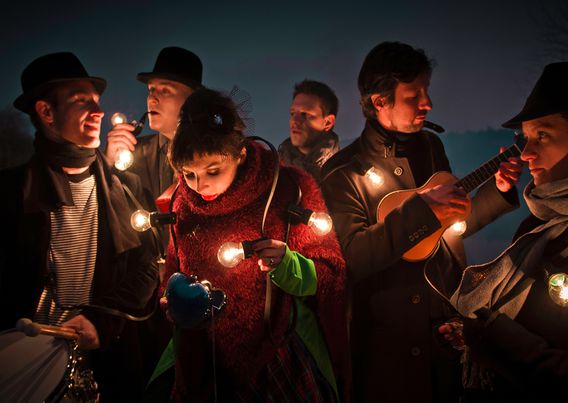 Deftly merging various idioms of popular music with the legacies of Slovenian folklore culture, Katalena are certainly amongst the more curious rock collectives in Slovenia. By way of unearthing archival folklore materials and fusing them with rock grooves, a quirky vocal performance and a certain explorative jazz sensibility, the band has created a diverse and yet also very recognizable body of work.

Treating tradition as a vital part of contemporary culture, they've set up a number of unique projects, from collaborations with some of the finest Slovene poets, like Dane Zajc and Svetlana Makarovič, to complex stage performances that, for example, involved the choreographers Edward Clug and Valentina Turcu.

The band members met almost accidentally in the summer of 2001 in an idyllic village in the Southeast of Slovenia. Coming from different musical backgrounds, from rock (Sfiltrom, Bast) and blues (Moj boogie band) to folk (Terrafolk) and trip hop (Melodrom), the musicians then experimented for a week with several old Slovene folk tunes they had discovered in the archives of the Institute of Ethnomusicology.

After that, they've gained a lot of attention in a rather short time, and their first public appearance in December 2001 at the Novi Rock (New Rock) festival in Ljubljana was, to everyone's surprise, completely sold out.

Katalena has played all major festivals and venues in Slovenia, including the prestigious Druga Godba Festival, where they've been invited to play 4 times up until now. Other festivals include Lent Festival, Rock Otočec, Carniola Festival, Mediterranean Festival, Izola, Trnfest Festival, Zmaj 'ma mlade Festival, Days of Poetry and Wine Festival and Kamfest.

In 2009 they've sold out the Gallus Hall in Cankarjev dom with a special event that included 13 ballet dancers from the Slovene National Theatre Maribor. That same year, as a part of Animateka Festival, the band also did an audio-visual concert that featured a crew of Slovene animators, who (beforehand) created short animated films, based on their songs. Another of their performances in this explorative vein is the Enci benci Katalenci show, which was created explicitly for children and which debuted in Cankarjev dom in 2015.

Katalena also has an enviable list of performances abroad, having played in the USA, Switzerland, Hungary, France, Germany, Austria, Italy, Israel and Croatia.

Members and their solo works

Katalena releases are quite diverse and often concept-driven. This 2002 début established their operational principle of modernising Slovene traditional folk idioms, which they continued on the second album Babje leto (2004).

Kmečka ohcet (2006) featured songs that have a lyrical connection to weddings and wedding-related themes, and Cvik cvak! (2008) reached into Resian folk music (Resia is a remote valley, close to the border in Italy, where a Slovene minority lives and is known for its specific language and culture). Noč čarovnic (2012) covered poems by various Slovenian poets and their 2015 release, Enci benci Katalenci, remodelled children's songs in such a way that they are equally appealing to children as well as to their more 'demanding' audiences. In 2018, the album called Človek ni zver (Man is not a Beast).