Plesna izba Maribor [The Maribor Dance Room] runs an extensive programme of dance and drumming education, yet simultaneously also stages various dance performances and explores contemporary performing arts in general. While some of its stage works feature its protégés, most of the shows are professional performances of a contemporary dance character.

The organisation was established in 1994 by Minka Veselič Kološa, a pioneer of contemporary dance education approaches in Slovenia. 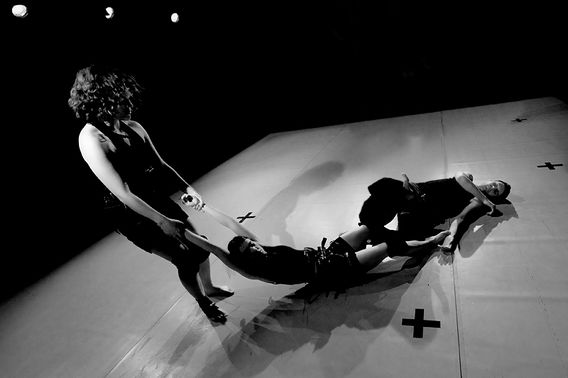 Festivals and other productions

In 2007 the organisation launched the Contemporary dance Platform, an annual international festival of contemporary dance and performance art. As of 2014 the festival is a part of a joint endeavour with MKC Maribor Youth Culture Centre, and is called the Festival Performa & Platforma.

As of 2012 Plesna izba organises the Maribum Afriqui Festival. It sets up dance improvisation events and workshops (often in non-theatrical spaces), multimedia projects, and various other interventions into the cultural life of the city of Maribor. For a time it was also responsible for the NagiB Contemporary Dance Festival (now an independant cycle of events).

Each year, Plesna izba Maribor prepares two larger productions, where students present their work to the wider audience: the New Year's production takes place in the Union Hall and the final performance at the Maribor Puppet Theatre. The young dancers also present their choreographies at the Opus - Festival of Dance Miniatures and the Živa Festival, organised by the Public Fund for Cultural Activities of the Republic of Slovenia.

Maribor Dance Room dance education programmes are organised so as to offer a spectrum of different dance techniques, also necessary for subsequent professional dance training and production. By introducing the young into the processes of contemporary art creation, Maribor Dance Room works on establishing a strong foundation for the development of contemporary dance in Maribor.

In addition to its dance education programmes, Plesna izba Maribor is offering all year-round drum and percussion education, including workshops for children and adults, taught by acclaimed percussion professionals. Participants of drum workshops join their forces with dancers in annual final productions.

The Maribum Afriqui Festival, a follow-up to the drum festival held from 2004 to 2008 and the later Maribum Festival, hosts a number of Slovenian and Malian musicians and offers workshops of African traditional and contemporary dance and drumming techniques.

Early in 2010, Plesna izba Maribor entered the four-year project Modul-Dance, supported by the EU Culture 2007–2013 programme and coordinated by the Spanish organisation Mercat de les Flors. The network included 20 partners from 16 countries and was aimed at supporting independent artists in production and international mobility.

Slovene partners of the project were Plesna izba and Kino Šiška Centre for Urban Culture in Ljubljana.

Veronika Valdés on the small stage of the Slovene National Theatre Maribor during her piece Zaklenjeno [Locked], performed at the Festival Performa & Platforma, 2017 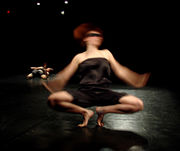 Measure with micrometer, mark with chalk, cut with axe, when the moon is increasing, Platforma festival, 2007 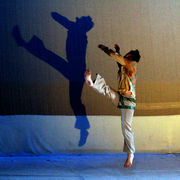 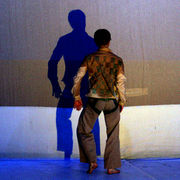 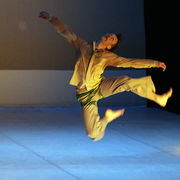 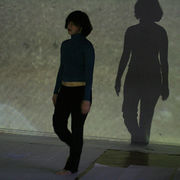