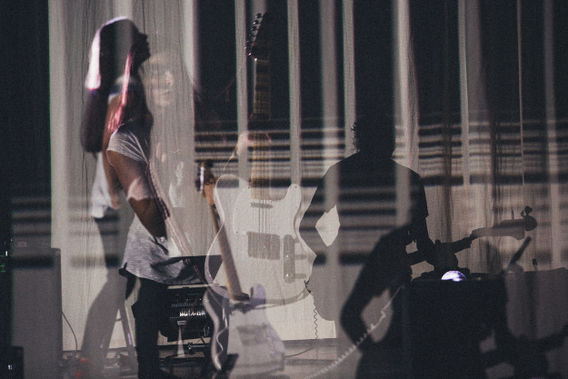 Together with the theatre director Bojan Jablanovec and the architect Aljoša Kolenc, Vlado Repnik set the ground for his later theatre research-oriented projects in the project THEATRE [GLEDALIŠČE], which in 1988 produced the performance Helios, based on Bertolt Brecht's Galileo Galilei, with the students of the Academy of Theatre, Radio, Film and Television (AGRFT). Repnik's subsequent theatre production is marked by continual conceptual shifts, while the projects move along the edges of the visual arts and theatre. In 1990, Repnik created the acclaimed performance Brigades of Beauty [Brigade lepote], which was presented also at the Evrokaz Festival, and Gertrude Stein (1994), shown at the Pula Festival, Croatia, at the Prague Quadriennal in 1995, and directed the performance I tempi passati (1999) at the Mladinsko Theatre, etc.

Later on Repnik has been increasingly involved in Internet and intermedia projects, in which he collaborates with a number of artists coming from the fields of multimedia as well as performing arts. The projects were set into gallery spaces.

In 2006, the installation Theatre Protocol was exhibited in the Kapelica Gallery in Ljubljana and the All About Lessoto project presented at KIBLA Multimedia Centre in Maribor.

GVR babaLAN's frequent collaborator was Igor Štromajer of the Intima Virtual Base, with which it collaborated in a number of projects, among them, the intermedia project Mary, Piss on Takashi Please! [Mojca, polulaj se prosim na Takašija!], in collaboration with Robert Klančnik, staged in March 2005 at Museum of Modern Art, MetaModel / MET(k)A MAKETA (2007), etc.

In 2008, GVR produced a discursive action with the translation I can work with you because I can speak for myself [Lahko delam s teboj, ker lahko govorim zase], presented at Škuc Gallery.

The performance Evergreen - Comments on Media [Evergreen - komentarji o medijih] (2009), co-produced by Intima Virtual Base, along with Bunker Institute and Eẋ Ponto International Festival aimed to reflect the paradoxical layers of our perception and different understandings of media translations.

GVR babaLAN has also cooperated with the Koroška Gallery of Fine Arts with the project Shortly After The Re_Move (2009), subtitled The Performative Machine and the Exhibition in Progress, featuring Aleksei Blinov, Robert Klančnik, Martina Ruhsam, Igor Štromajer, and Veronika Zott.

In 2008, Repnik in collaboration with Austrian contemporary dancer and movement artist Martina Ruhsam initiated in the frame of the Mladi levi Festival the Blank Protest, a local hour of a global intervention, a follow-up to a similar action held in New York, which featured an exhibition of previous actions in the project's co-producer City Museum of Ljubljana. The manifestation H Story (2007), also co-authored by Repnik and Ruhsam, also appeared at the City Museum of Ljubljana.

Besides collaborations with foreign artists, GVR babaLAN has also cooperated with Copypaste, Austria, in the polymedia action One Dollar One Dollar (2007), which was presented in dietheater Künstlerhaus, Vienna, in the frame of the Imagetanz Festival, while GVR babaLAN's productions appeared in Austria, Madrid, Lisbon, Rome, etc.