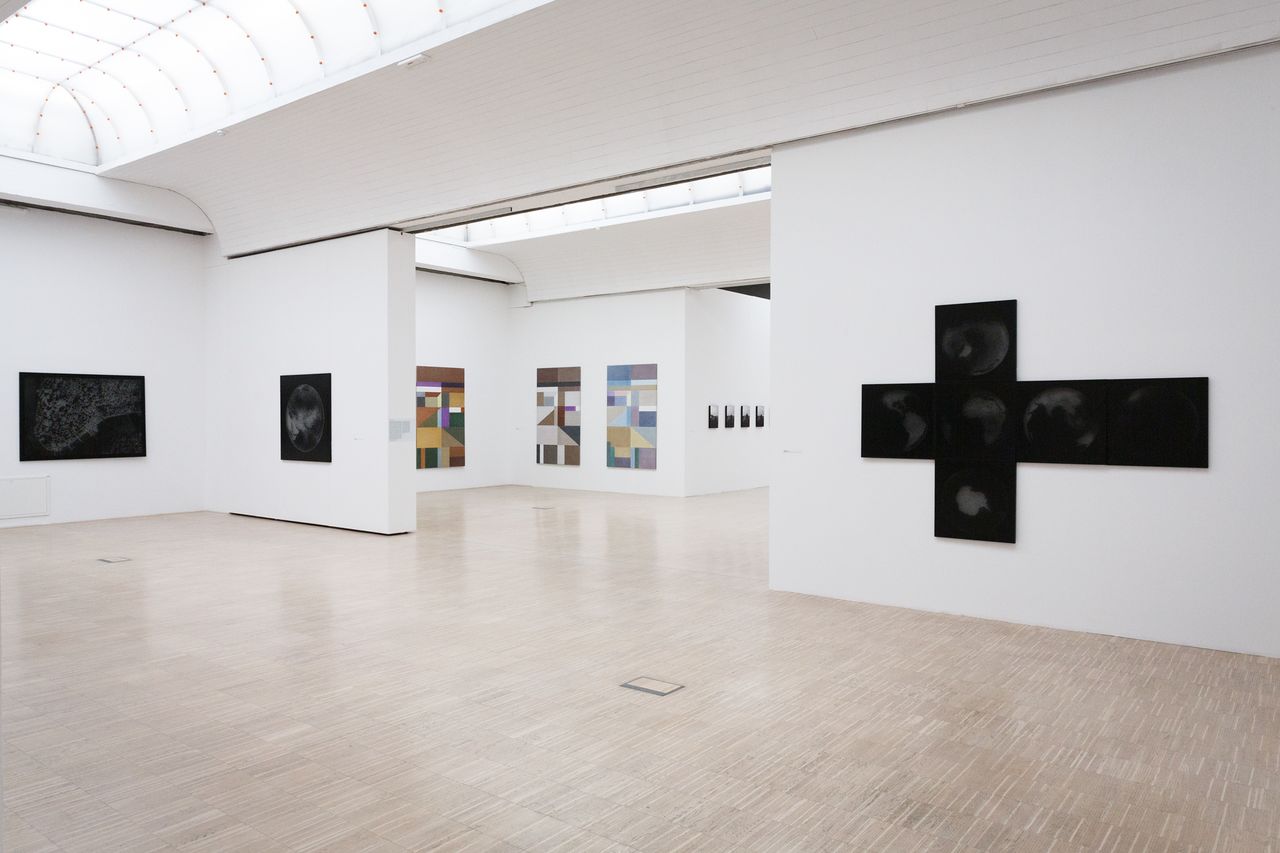 From its very beginnings in 1957, the central regional gallery institution Museum of Modern and Contemporary Art Koroška (abbreviated as KGLU standing for Koroška galerija likovnih umetnosti) has been a platform for a diverse contemporary arts programme covering international, national and regional contemporary art. A rich collection fo artworks that comprises over 3000 items, includes also works by Henry Moore, Ossip Zadkine, Daniel Buren, Victor Vassarely, and other eminent figures who exhibited in the gallery in the 50s, 60s or 70s.

The gallery manages also the gallery in a nearby town Ravne na Koroškem.

The Museum of Modern and Contemporary Art Koroška (KGLU) started under the initiative of local academic circles with painter and pedagogue Karel Pečko at its forefront. Through his ambitious programme, the gallery invited fine arts critics to co-operate as selectors, which in the 1960s was by no means an established practice in Slovene galleries.

The institution was established on endeavours similar to Arnold Bode's idea for documenta in Kassel in 1955 – to create a fine arts centre out of a rural town like Slovenj Gradec. The very first exhibition, Swedisch Kitchen, was dedicated to modern industrial design and organised already in 1954. The gallery was officially established in 1957 having its own exhibition space in the old town hall on Glavni trg. In 1966 the edifice where the gallery operates and exhibits still today was built. In the same year the gallery's activities received the honorary patronage of the United Nations (received also in 1975, 1979, 1985, and 1991).

The ambition to bring Slovenj Gradec, a small town near the Slovene-Austrian border, to the international map of art as well as to connect Slovene and international artists continued effectively under the guidance of Milena Zlatar, who paid much attention to engaged art. In 2008 Marko Košan became the director of the Museum and offered a space to the regional artists with the Small Gallery located in the lobby of the Museum. The space opened in 2009 and was transformed into the museum's shop after the big renovation of the Museum in 2011. In 2012 the Ravne Gallery was established and took over the role of the Small Gallery, focusing on the comprehensive presentation of current artistic production by artists from the Koroška region and from across Slovenia. With Andreja Hribernik, a new director since 2013, the programme further expanded into international field.

The museum's rich collection focuses on regional authors, but also includes several donations, bequests, and purchases of international authors. Parts of the collection are on view temporarily, some works also appear in various exhibitions.

The collection is divided into several segments, some dedicated to the most important regional artists. Jože Tisnikar (1928–1998) matured as an artist while working in a hospital pathology department. His 65 paintings and drawings are best defined by the term "dark modernism" and together with documentary material on the artist's life, reveal Tisnikar's world, examining his iconographic theme of death. The collection Hommage to Tisnikar also includes works by other Slovene artists with a similar sensibility: Zdenko Huzjan, Mirsad Begić. In 2003 Bogdan Borčić (1926-2014) donated 40 paintings from 1986 to 2003, which have made the Koroška institution, together with the Božidar Jakac Art Museum, Kostanjevica na Krki which holds Borčić's graphic cabinet, the central institution to study the works by this vital experimentator.

The collection of 19th- and 20th-century Slovene art reflects several decades of the gallery's exhibitions programme, and features the work of Marko Šušteršič, France Mihelič, Riko Debenjak, Marjan Pogačnik, Božidar Jakac, Ive Šubic, Rudolf Kotnik, Kiar Meško, Dragica Čadež, Janez Boljka, and others. The most significant segment of the collection are works by artists who are natives of Carinthia or are in some way or another connected with the Mislinja, Drava, or Mežica valleys (Franjo Golob, Karel Pečko, Lojze Logar, Gustav Gnamuš, Anton Dolenc, Vida Slivniker, Štefan Marflak, Peter Hergold, Sašo Vrabič, etc.).

The collection not only presents the heritage from the 19th century onwards but also the most recent art trends. A special place is occupied by the works of Franc Berneker (1874–1932), the first modern Slovene sculptor and contemporary of the impressionist painters, and by the works by painter Oskar Pistor (1865–1928), whose portraits, genre and landscape paintings establish links between the Upper Drava Valley and cosmopolitan Vienna and Munich, and also depict the landscapes of the Tyrol and Carinthia which inspired Pistor. The collection also includes some works of former Yugoslav authors.

The international collection includes works by Ossip Zadkine, Victor Vasarely, Maria Bonomi, Toon Wegner, Gene Chu, and Paolo Minoli. It consists of paintings, prints, photographs, original architectural drawings, statues, and documentary material on installations, including performances. The donation of the works by Italian artist Pino Poggi (donated in 1998) provides the basis for a developing an International Museum of Social Aesthetics.

The open-air gallery on the edge of Štibuh Park is also arranged as a venue for cultural events. In the 1970s its cultural function was further enhanced with the installation of sculptures by selected artists (Ivan Meštrović, Drago Tršar, Josip Diminić, Jordan Grabuloski, Ivan Sabolić, Ratko Vulanović, Ana Bešlić, etc.) under the slogan "For Peace".

The KGLU Art has organised several repercussive international exhibitions and events, starting in the mid-1970s. In 1979 the International Fine Art Exhibition exposed the problems of the socialisation of art and psycho-formation, it dealt with the peripheral areas of fine art, and touched upon the alternatives in contemporary architecture in the 1970s. An exhibition featuring works from Ossip Zadkine's collection in Paris took place in 1991. The sculpture "Memorial to the Apologist of Cubism – the Poet Guillame Apollinaire" (1937, bronze), which Zadkine presented as a gift to Slovenj Gradec at the first international fine art exhibition in 1966, was transferred from Paris – with the permission of the foundation – as late as 1990, and in the same year it took its place in the atrium of the gallery.

In the 90s and up to 2010 the KGLU has featured various thematic international exhibitions (The Artist and an Urban Environment (1997); The Kitchen – From the Idea to Excession (1954–2004) (2004), 2 LIVE on the dilemmas of our existence and being, 60 years after the end of World War II (2005) – here the primary focus was on photography – a medium that decisively marked the 20th century; Thread [Nit] with 33 Slovene and foreign artists, curated by Maja Škerbot, marked the 50th Anniversary of the KGLU in 2007. In 2008 Jernej Kožar and Rado Poggi curated Necessary Discourse on Hysteria on the issue of social hysteria with artists experiencing the process of an exhibition-installation, and in the remaining 3 weeks joined by performances, discussions, theatre, talks, speeches, and video works. 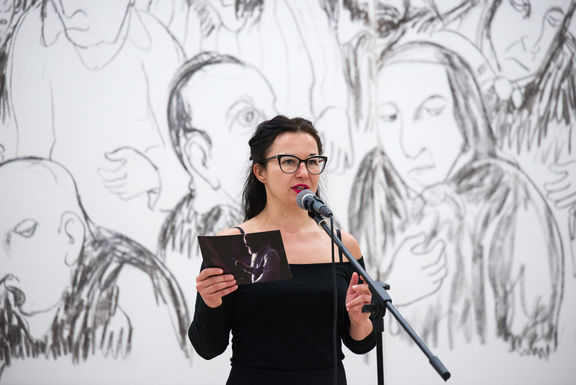 Andreja Hribernik at Museum of Modern and Contemporary Art Koroška, 2018. 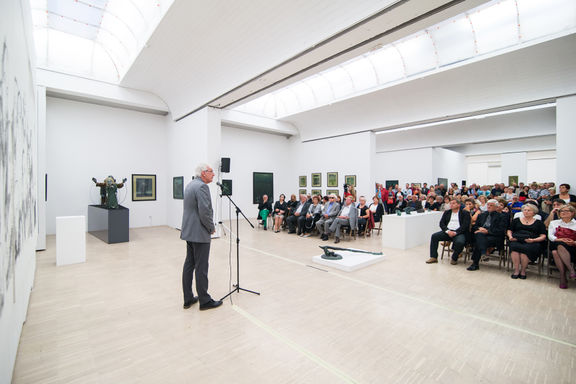 Opening of exhibition Jože Tisnikar, Death is not the end at Museum of Modern and Contemporary Art Koroška, 2018. 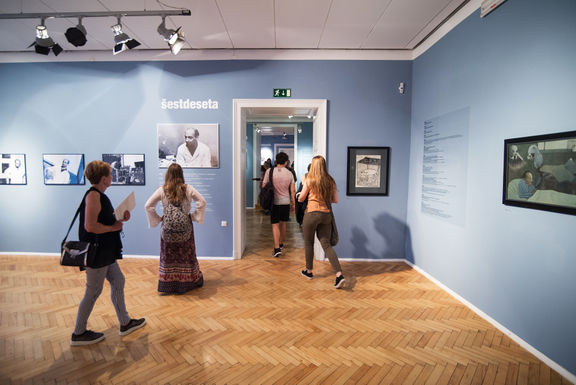 Jože Tisnikar, Death is not the end, Museum of Modern and Contemporary Art Koroška, 2018. 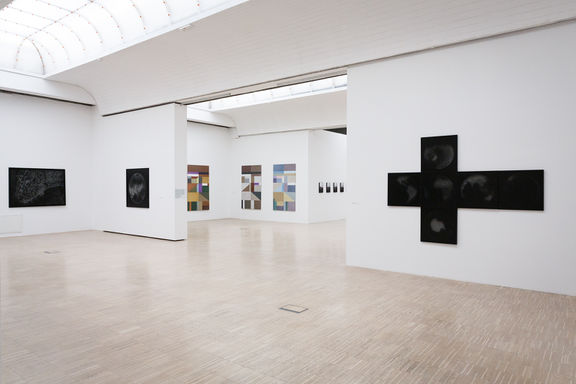 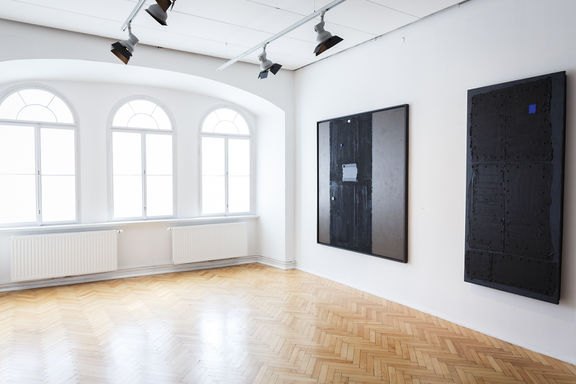 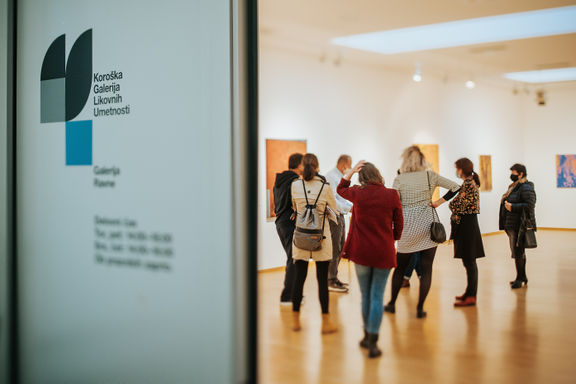 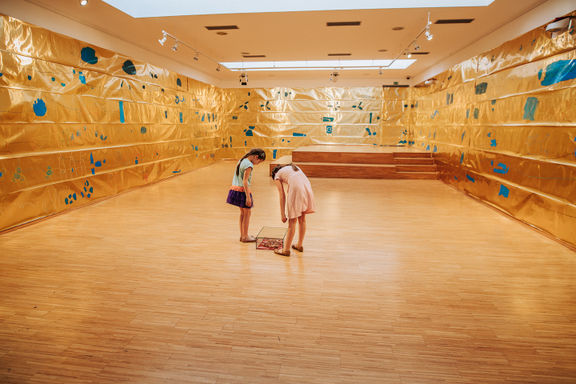 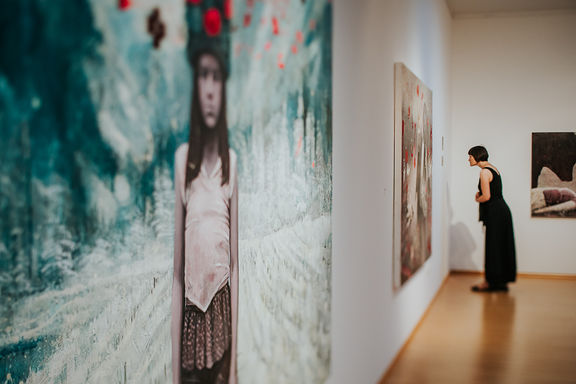 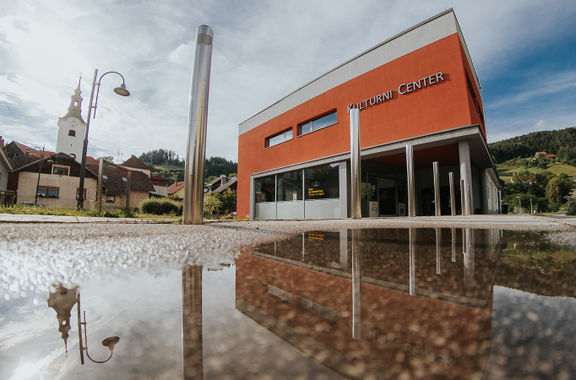 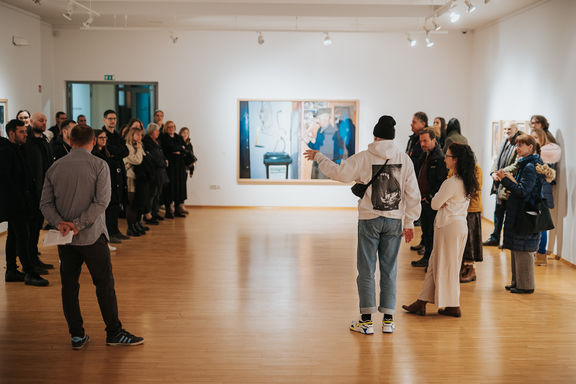