In 2010 the Ljudmila Art and Science Laboratory was established as a successor to the Ljudmila - Ljubljana Digital Media Lab programmE of the KUD France Prešeren, a new organisation gradually curating all the programmes and projects. See below the archival article about the programmes up to 2012.

In 2011 the City Art Gallery Ljubljana organised a retrospective exhibition Powered by Ljudmila, which comprised several interviews with the principal Ljudmila cofounders, associates, and collaborators and a line of documents testifying to seventeen years of events, projects, and actions, and its interaction in Slovenia and internationally.

The exhibition Real Time Settings for Ner[d/ve]s at ŠKUC Gallery presented programme based media art linked to responsive technologies, eight projects recently produced by Ljudmila lab and its network of international collaborators. In autumn 2012 Ljudmila collaborated with Medialab-Prado (Spain) and the SGMK (Switzerland) in conceiving and organising Interactivos?’12 Ljubljana: Obsolete Technologies of the Future, a workshops in collaborative prototyping.

Ljudmila - Ljubljana Digital Media Lab was initiated in 1994 by a group of new media artists and activists living and working in Ljubljana (including Vuk Ćosić and Marko Peljhan) within the new media programme at the Open Society Institute – Slovenia. Since 2001, and up to 2014, the Ljudmila programme of the MMC has operated in the framework of KUD France Prešeren.

First the Ljudmila was housed in the dislocated premises of the high school Gimnazija Šentvid on the periphery of Ljubljana, then in 2005 it was moved to Rimska 8 in the very centre of Ljubljana. A well-equipped digital media lab has focused on digital production as well as education, research and development of hardware and software. It also provided knowledge, equipment, Internet access, server space, electronic publishing and other affordable networking services to non-governmental and non-profit organisations, art collectives, active individuals, and others. In 2004, for its work as the Slovene epicentre of digital creation for group projects and autonomous artists and researchers, Ljudmila was bestowed the Golden Bird Award for the section of new media.

Ljudmila Music Video 1 by Vasja Omladinac by Ljudmila on Vimeo

The project Frida V. was conceived by a media artist and programmer Luka Frelih and developed in cooperation with V2_, Institute for the Unstable Media (Rotterdam) and plenty of other supporters and funders. Frida V. (Free Ride Data Acquisition Vehicle) is a free, mapping interface for bicycles that he first built for DEAF 2004 and has since been developing further. The rugged and comfortable bicycle equipped for efficient exploration and mapping of public urban spaces that carries a small computer, a GPS positioning device, an 802.11 wireless network transceiver, and a basic audiovisual recording unit, has been realised and presented in numerous cities all over the world: Ljubljana, Rotterdam, New York, Munich, Bergen, Beijing, etc. In 2009 a new all-in-1 Frida Box prototype series was developed, built, and test-ridden in Paris, France. In the beginning of 2010, Frida V. was exhibited within the exhibition Three Electromagnetic Habitats in the KiBela Art Space. The project was presented also at the Tactics and Practice: New Media Drivers pilot seminar for new media arts produced by Aksioma Institute in Ljubljana in June 2010.

Making of Frida V. for Futur en Seine Festival of the Digital City in Paris by Frida V. on Vimeo

Robertina Šebjanič, a video and new media artist, developed at Ljudmila lab several interactive installations, e.g. Pufination (2008, co-author Luka Frelih), which was presented at KIBLA Multimedia Centre in Maribor and the Device_art 3.009 festival in Zagreb, and Futuro Autopoiesis (2010). She collaborates with biochemist and molecular biologist Špela Petrič on artistic and research project Towards the Human Spore, considering an alternative, constructed evolution of the human species and future scenarios involving the humalga.

Since 2011 ∆ Lacanoid, a simulation of human-like presence has been developed by Žiga Kranjec, Igor Križanovskij and Urban Belina. A concept prototype Lacanoid 1 was presented at the MKC Maribor Youth Culture Centre. 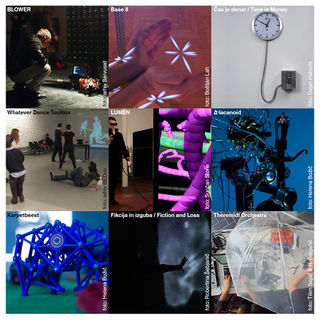 Ljudmila has cooperated with several artists in finding the best technological solution for their exhibitions or performances. One of the most complex work was accomplished for the two Slovenian project that were presented at the 50th Venice International Biennale of Art in 2003: Žiga Kariž's TERROR=DECOR: ART NOW at the A plus A Slovenian Exhibition Space and the Macrolab project by Projekt Atol Institute, set on the Island of Campalto in Venice lagoon and at the Corderie, within the Individual Systems. In 2010 the project Telebody with contemporary dancers and dramaturgs was developed for the Ukrep - Festival of Dance Perspectives.

Ljudmila organises regular workshops in basic and advanced use of open source software (Blender, Pure Data, MediaWiki), as well as the Free Circuit workshops and Digital Dish public lectures and artist talks by international new media artists. The Prosto-vezje programme in general engages in the experimental ("circuit bending", "tinkering" and "kits") development and making of the electronic circuit hacks based on the free software. The participants are encouraged to develop further uses and include the findings in their artistic work.

As a result of a theremin and theremidi physical interface workshop at Ljudmila in 2011 the electronic noise ensemble Theremidi Orchestra was founded in 2011, in collaboration with Borut Savski, Cirkulacija 2. The Theremidi audiovisual public presentations at festivals are usually combined with open workshops for making DIY instruments and gadgets. Today the Ljudmila Art and Science Laboratory offers a programme platform for the Theremidi Orchestra.

Interactivos is a part of Studiolab, a 3-year international initiative funded by the EC Seventh Framework Programme in 2011, which has developed into a European platform for creative projects that aim to bridge divides between science, art and design. Medialab-Prado, one of the Studiolab core partners, has collaborated with Ljudmila Digital Media Lab and SGMK, Zuerich, in organising Interactivos?'12 Ljubljana dedicated to the theme Obsolete Technologies of the Future. The six projects selected by means of an open call were co-created by more than 30 international guests who participated in an intensive ten-day collaborative prototyping, hackcamp, advanced workshop and social event taking place at Ljudmila lab. The elaborated projects aim to rethink the qualities of outdated technology and make way for long-term, sustainable usage of technology in our environment for the decades to come. 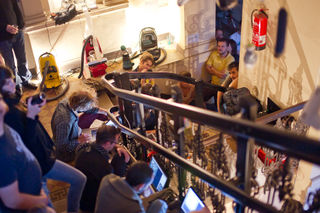 In the context of its Prosto-vezje [Free Circuit] programme Ljudmila every year hosts a resident artist working with new media. One of the first residents was Teresa Almeida from Portugal who presented the interactive Space Dress and Yuga accessories in 2006. The residency in 2009 was produced by Ljudmila and the MoTA Museum of Transitory Art run by CodeEp. Nedine Kachornnamsong (Thailand/Sweden) conducted a research-in-practice with a focus on social interaction, spatial conditions, and tangibility. Recently she has been working on questions related to the possible integration of online representation and experience into a physical environment. During the residency she gave a Digital dish lecture entitled Monitor and Display: An Image of the Ghost in the Machine at Ljudmila, while her Yes/No/Maybe interactive installation and experimental social event (transforming online dating elements into a physical setting) took place at Ljubljana's Moderna galerija (MG). Rob Canning, a composer and sound artist, a member of the GOTO10 collective, presented his projects at the EarZoom Sonic Arts Festival during his Ljudmila residency in October 2010.

Base 8 by csugrue on Vimeo

In 2011 Ljudmila´s artist-in-residence was Chris Sugrue, an artist and programmer who investigates topics such as artificial life, eye-tracking and optical illusions. In Ljubljana she has developed a project BASE 8, a system that examines the negative spaces between fingers and the motion of hands and arms. It was presented in KIBLA Multimedia Centre, Maribor, and netclub MaMa, Zagreb (Croatia). The latter hosted also the 2012 project by the residents James Powderly and Eun-Jung Son who presented the phenomenon of painting licking in the documentary The Lickers at Tobačna 001 Cultural Centre.

During 2001-2006 Ljudmila ran Ljudmilin Informator, a community-based information platform and then started to develop Kulturnik.si, a nationwide aggregator of cultural events (in the frame of M3C Multimedia Centres Network of Slovenia).

Since 2010 Ljudmila Art and Science Laboratory develops and hosts the portal for international cooperation Culture.si and a metasearch engine, both funded by the Ministry of Culture.

Ljudmila operates through KUD France Prešeren Arts and Culture Association and was a member of the European Cultural Backbone (ECB) initiative and the regional media centres A.Network (together with mama in Zagreb, pro.ba in Sarajevo, and kuda.org in Novi Sad). In 2004 it became a founding member of the M3C Multimedia Centres Network of Slovenia. From 2005 to 2010 it acted also as a public lead for the project Creative Commons Slovenia and was a member of the international networks Creative Commons and Communia. In 2011 this role was passed to the newly established Ljudmila Art and Science Laboratory. 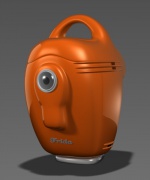 3D Printing of a case for Raspberry Pi as part of Interactivos?’12 Ljubljana: Obsolete Technologies of the Future at Ljudmila - Ljubljana Digital Media Lab, 2012 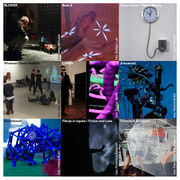 A typical desk at Ljudmila - Ljubljana Digital Media Lab, a well equipped digital research lab in Ljubljana with an open culture of innovation and collaboration. A Frida project has been developed 2004–2010 by Luka Frelih. 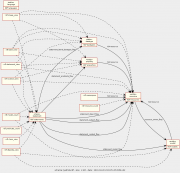