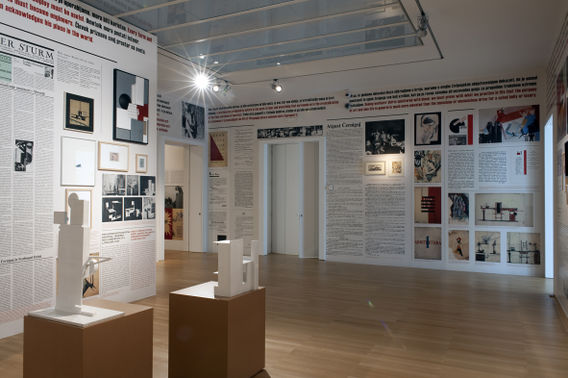 The Moderna galerija in Ljubljana has been the Slovene national institution for modern and contemporary art since 1948. In November 2011 when the renovations of its new space in the new cultural quarter at Metelkova were finished, the institution split into two venues and got the longer name and an abbreviated form MG+MSUM standing for Museum of Modern Art, Ljubljana plus Museum of Contemporary Art Metelkova.

The Museum of Modern Art continues its activities in the recently renovated space alongside Tivoli Park, focusing on the art of the 20th-century modernism and contemporary works disseminating modernistic ideas. Along with temporary exhibitions and projects MG presents 20th Century / Continuities and Ruptures, the permanent collection of Slovene 20th-century art. Its auditorium hosts various public presentations, symposia, conferences, and workshops organised either by Moderna galerija or other producers.

The photo archive of the museum is located at the Moderna galerija, while a library, an extensive Modern art archive, a translation and publications department and a conservation-renovation department are situated at the Museum of Contemporary Art Metelkova. 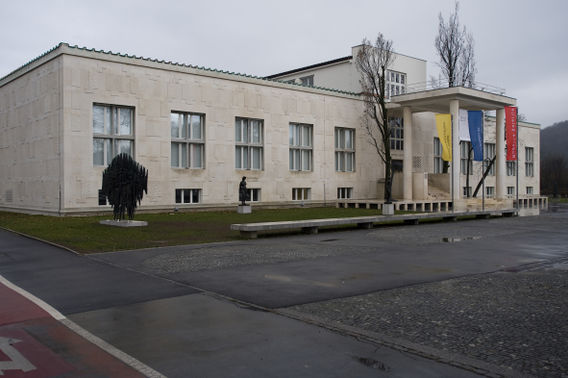 The museum was initiated by the art historian, critic, writer, and diplomat Izidor Cankar, following the receipt of a generous grant from the heirs of industrialist Dragotin Hribar. Designed by architect Edvard Ravnikar (1907–1993) in the 1930s – before his studies in Paris with Le Courbusier, when he still followed the classicist principles of Jože Plečnik – construction on the museum was halted during WWII, leading to its official opening in 1948.

Over the years Moderna galerija has presented numerous important exhibitions, many of which have been pivotal in the development of Slovene art. Such exhibitions include the Slovene Impressionists exhibition of 1949, which constituted an important victory over extreme ideological dogma; the exhibition of Riko Debenjak and Stane Kregar of 1953, which brought abstract art to a wider audience; the Henry Moore exhibition of 1955, which gave powerful stimulus to modernist tendencies; and the first Ljubljana International Biennial of Graphic Art of the same year, which spurred the inception of numerous biennials around the globe.

In August 2011 a new permanent display of the selected works from the Moderna galerija collection was opened. Under the title 20th Century / Continuities and Ruptures the exhibition abandons the chronological order and introduces the 20th-century avant-gardes and the art of the Partisan resistance to the national history of art on equal terms as the more familiar trends. The main novelties are the presentation of the avant-garde of the 1920s and the second reconstruction of the Trieste Constructivist Space (1927), supervised by Dragan Živadinov and Miha Turšič from the Delak Institute, the art of the Partisan resistance, photography, and an overview of the art system in Slovenia in the 20th century. The exhibition was designed by Novi kolektivizem (NK) and conceived by art historians Sergej Kapus, Miklavž Komelj, and Beti Žerovc in collaboration with the Moderna galerija curators.

Since 1991 Moderna galerija has also collected photographs by Slovene photographers from the period between the two world wars, works by contemporary Slovene photographers, and works by some international photographers who have exhibited at the Moderna galerija (Thierry Girard, Timo Kelaranta, Cesare Pietroiusti, Armin Linke, Andres Serrano). Because of their importance and quantity, the works of Fran Krašovec (1892–1969), considered the pioneer of modern photography in Slovenia, represent a large part of the collection.

A collection of new media art is currently taking shape through the acquisition of video works, films, moving images installations, and Internet projects. It already comprises representative works that are good examples of the development of media art in Slovenia and presents, despite their relatively small number, a varied picture in terms of generation, expression, and technological approach.

In addition to its role as the Museum of Modern Art, Moderna galerija also functions as a temporary exhibition gallery which hosts survey or retrospective exhibitions of works by key Slovene artists of the 20th century, as well as exhibitions of contemporary domestic and international art.

In the last two decades, the significance of the international exhibition programme in the work of the Moderna galerija has grown considerably and major names in the contemporary world art are regularly presented in individual and group exhibitions. 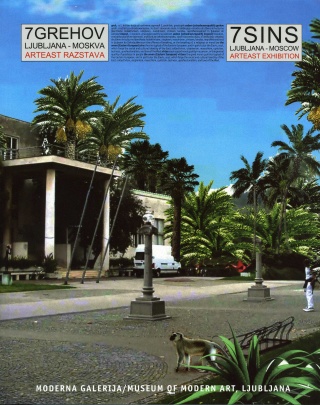 Apart from the international character of its programme and collections, Moderna galerija and its staff also participate in joint projects and platforms. For the period 2010–2013 Zdenka Badovinac was elected president of the CIMAM – International Committee of ICOM for Museums and Collections of Modern Art.

In 2009 Moderna galerija co-founded L'Internationale, a trans-institutional organisation of five European museums and artists' archives (Július Koller Society from Bratislava, MACBA from Barcelona, VAM from Eindhoven, and M HKA from Antwerpen) with the aim to "to challenge common canons and dominant narratives of art history." In the same year Moderna galerija also joined the Digitizing Ideas: Archives of Conceptual Art Practice, an EU project led by the Museum of Contemporary Arts Zagreb.

Since the inception of the Radical Education Collective in 2006, Bojana Piškur, a curator from Moderna galerija, coorganises or participates in events dedicated to learning knowledge "on the social and political responsibility of the researchers by experiencing it through the process of political self-emancipation".

As a partner in the EU project Gravity – Art, Religion, Science (2003–2005) Moderna galerija realised an innovative bilingual online archive Towards Zero Gravity. Gravity in Slovene Fine Art in the 20th and 21st Centuries conceived by Igor Zabel and facilitated by the Modern Art Archive.

Poster for DOMA exhibition, featuring opus of the architects France and Marta Ivanšek, Museum of Modern Art, designed by Studiobotas, 2010

20th Century / Continuities and Ruptures, a permanent display of the selected works from the Moderna galerija collection, 2011

20th Century / Continuities and Ruptures, a permanent display of the selected works from the Museum of Modern Art collection, 2011

The avant-garde of the 1920s presented in a permanent display of the selected works from the Museum of Modern Art collection, 2011

Installation view of Body and the East. From the 1960s to the Present, curator: Zdenka Badovinac, 1998

Installation view of Body and the East. From the 1960s to the Present, curator: Zdenka Badovinac, 1998 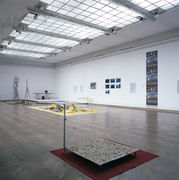 2023+ exhibition at the Moderna galerija / Museum of Modern Art, Ljubljana