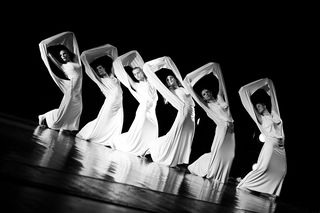 Established in 1976 by one of the pioneers of Slovene dance theatre, the choreographer Damir Zlatar Frey, the Celje Dance Forum has since then run a quality dance education programme, especially intended for children and youth, as well as produced several acclaimed evening-length dance performances, which have been presented at home and abroad. In addition, the Celje Dance Forum also organises other cultural events, such as music concerts and guest performances.

Established as the dance ensemble of Damir Zlatar Frey, the group, which later evolved into the Celje Dance Forum, created numerous projects in the 1970s which were fundamental for the development of Slovene dance theatre (including Metastases [Metastaze] (1977), Triptych [Triptih] (1978), etc.) and received great acclaim.

Since 1980, the Celje Dance Forum has been led by the choreographer, pedagogue, and the 1984 Golden Bird Award recipient Goga Stefanovič-Erjavec and has since developed into an important educational centre for contemporary dance, offering classes in contemporary and modern techniques, ballet, yoga, and oriental dances, as well as movement workshops for children, the youth, and adults.

Many young dancers begin their education here and then continue their studies at academies abroad, in New York, Salzburg, Brussels, Amsterdam, London, and Vienna. The forum's dancers regularly present their work at the young dancers competition "OPUS 1", organised by the Public Fund for Cultural Activities of the Republic of Slovenia, and are often awarded.

The productions of Celje Dance Forum are widely presented in the region and have been presented at Slovene festivals of youth dance creativity (at the Transgenerations Festival of Youth Creativity, Lent Festival, Kunigunda Festival of Young Cultures, etc.) as well as at international ones (in Ireland, India, China, at the Festival de l'Europe in France, etc.).

Besides its own productions, the Celje Dance Forum presents performances of other Slovene and international producers (such as, Plesna izba - Maribor Dance Room, Dance Studio Intakt, Dance Theatre Ljubljana, etc.).

Celje Dance Forum also organises a series of events called Evenings With..., which hosts artists from the world of theatre, music, dance, literature, and multimedia (such as, Vita Mavrič, Laibach, Terrafolk, etc.).

Dancers of the Celje Dance Forum (in white) at the opening ceremony of the International Children Festival of Performing Arts in New Delhi, India, 2006

Premiere of the Ionosphere 2, an interactive stage project by Celje Dance Forum and Aperion music group, at the Stadthalle in Singen, Germany, 2009

Group bow at the end of the Ionosphere 2 premiere, an interactive stage project by Celje Dance Forum and Aperion music group, at the Stadthalle in Singen, Germany, 2009

Performance at the 35th anniversary of the Celje Dance Forum, 2011