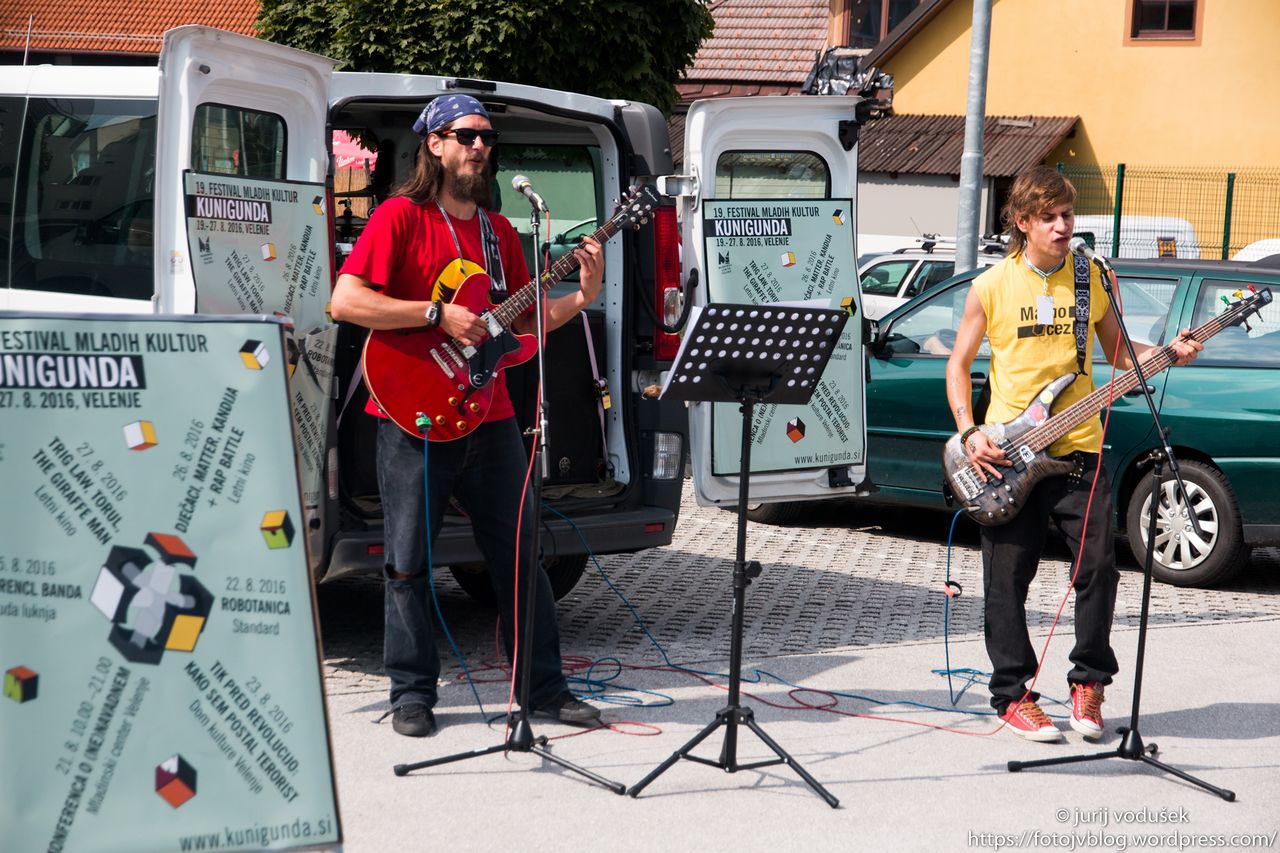 During Kunigunda Festival of Young Cultures Mr. Van Punk performed at various locations around Velenje, setting up their gigs directly out of their van, 2016

The Kunigunda Festival of Young Cultures is a summer festival launched in the city of Velenje in 1998. The festival puts a special emphasis on the presentation and promotion of younger Slovene artists as well as international ones, of all generations. The festival's extremely varied programme features current happenings in the field of alternative arts as well as events for children, various sports activities, and some occasional mainstream-profiled acts. Thanks to its imaginative programming and its integration into the urban fabric of the city, Kunigunda is one of the more popular regional or "city" festivals in Slovenia.

The festival's name has its origins in local folklore story about Kunigunda, a beautiful young girl who supposedly lived in Velenje Castle. She was a castle maiden, accused of witchcraft and thrown into the castle well to die. There is a rumour that she has been haunting the castle hallways ever since. The festival honours the innocent girl with a celebration of young people’s culture, since they are also often mistakenly accused of not being cultural enough. Like Kunigunda, alternative culture is searching for its place under the sun. Kunigunda gives its visitors a chance to get to know it and enjoy it. 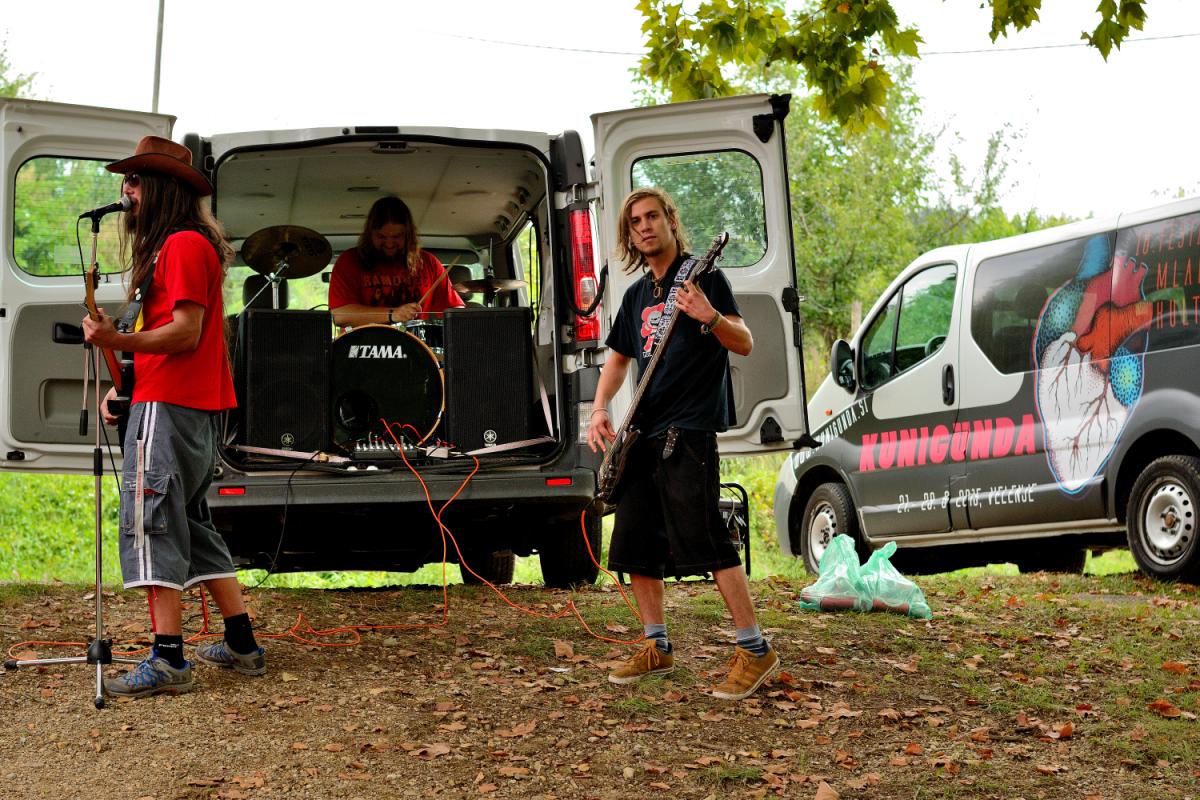 A band performing out of a van at Kunigunda Festival of Young Cultures, 2015

The programme is conceptually wide and diverse, comprising music, visual arts, contemporary dance, theatre, puppetry, sculptural installations, documentary film and video screenings, literary evenings, new media art events, lectures, and art auctions. The events are spread throughout the city, from its parks and streets (and even its lake) to the main stage in the city centre, the local skate park and the Pekarna exhibitions grounds (a venue created at the site of an abandoned industrial building in the course of a past festival edition).

There are also other, more temporary interventions into urban space like setting up artist residencies at floating dwellings on the local lake and transforming one of the city parks into a creative polygon. The streets also hold theatre shows and arts performances (for example, Pocestnica by KUD Ljud), slack-line and roller-blade gatherings, photography exhibitions, and so on.

The festival also holds lectures on topics like the American poet Walt Whitman, appearances of artists like Dragan Živadinov, workshops on sound sculpting and other arts performances and installations that are rather atypical for this type of a festival.

Kunigunda has produced also projects critical to society, like Experiment: Tito’s Velenje, The Wedding: a celebration of love, Kunigudra and founding of the Autonomous Republic of Kunigunda (ARK). Kunigunda is constantly evolving, reconstructing and reconfiguring itself. 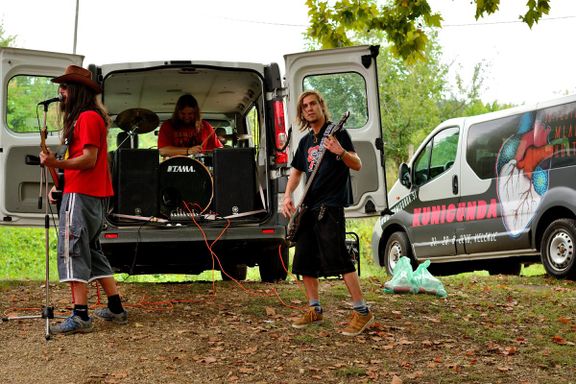 A band performing out of a van at Kunigunda Festival of Young Cultures, 2015 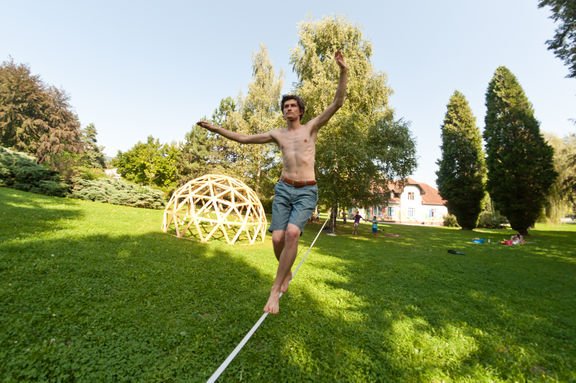 A slack-lining workshop taking place during the Kunigunda Festival of Young Cultures, 2011 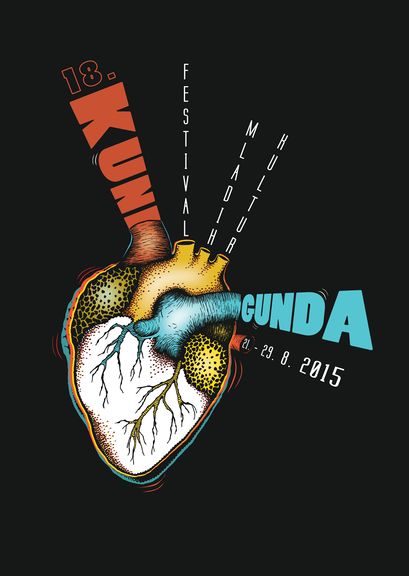 A poster for the Kunigunda Festival of Young Cultures 2015 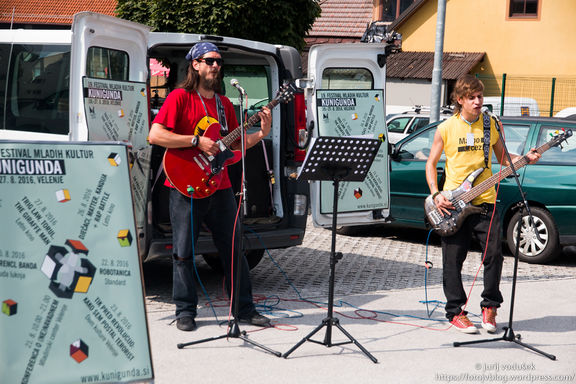 During Kunigunda Festival of Young Cultures Mr. Van Punk performed at various locations around Velenje, setting up their gigs directly out of their van, 2016 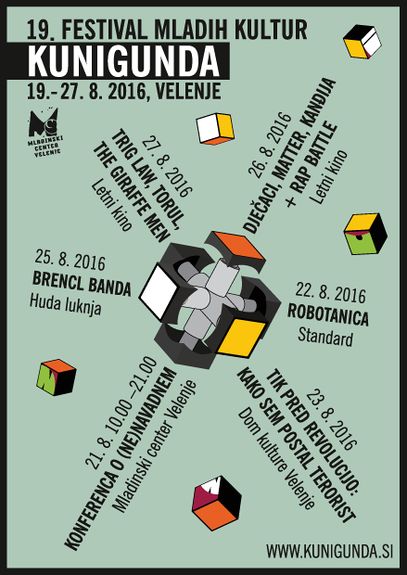