The performing arts journal Maska (The Mask) is a successor to the modernist magazine of the same name which was launched in 1920. Published by Maska Institute since 1993, this bilingual (English and Slovenian) journal appears around three times a year and is mostly topic-related. Maska brings critical reflection on topical concepts of performing arts theory and current productions (domestic and international), texts about the key reformers of the 20th-century scene, and translations of contemporary theoretical texts.

Some of the more recent titles include: Writing for the Scene, Writing on the Scene; Theatre and Cultural Struggle; On Repetition; a special issue on the 25th anniversary of the Contemporary Dance Association Slovenia, etc. For a detailed list see External links below.

Each issue also includes interviews with artists and theoreticians, reviews of performances and books, as well as articles on cultural politics.

Since the first 10 issues in the early 1920s, Maska was first revived in 1985 when the Union of the Cultural Organisations (now Public Fund for Cultural Activities of the Republic of Slovenia) launched Maske (Masks) magazine. Its editors were Tone Peršak and Peter Božič who, together with Dušan Jovanović and Dragan Klaić developed also an ambitious international release of the Euromaske, European Theatre Quarterly in English (1990–1991). Only three issues of this ambitious mainstream magazine were published.

Soon Maja Breznik and Irena Štaudohar changed the editorial policy and developed a more scholarly and critical approach towards the performing arts field. Their first issue was dedicated to the performance Baptism under Triglav by the NSK theatrical group Scipion Nasice Sisters, directed by Dragan Živadinov and thus launched a debate about new technology, art and science. Although the editors have been changing, this transdisciplinary approach has remained in focus up to date.

Since 2002, Maska has been published in English as well. The journal became accessible to an international audience and is considered relevant as it continually develops a critical discourse in the field of contemporary performing arts and theory.

Maska journal has participated in numerous collaborative projects: the issue Fama, a bilingual (English and German) journal, published in cooperation with Frakcija journal of Zagreb to coincide with the Munich Dance Festival, which was dedicated to the thematisation of the status of the body in different cultures and artistic practices and included texts by Hans-Thies Lehmann, Andre Lepecki, Aldo Milohnić, etc.

Together with Performance Research and again Frakcija, Maska prepared an issue devoted to the positioning of aesthetic forms, re-mapping and reconfiguring of East and West Europe, and reflecting on the similarities and differences in assumptions about form and relational structures within the apparently shared European frameworks.

The online journal in Kassel 2007, which compiled the articles that had been published on the leitmotifs of documenta 12 in more than 100 media around the world, also involved Maska journal. In 2010, the journal Maska collaborated with the Amfiteater Journal, focusing on "Work and Collaboration Processes within Contemporary Performing Arts". 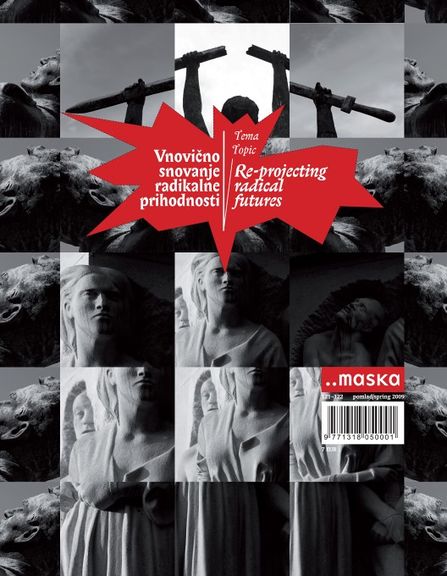