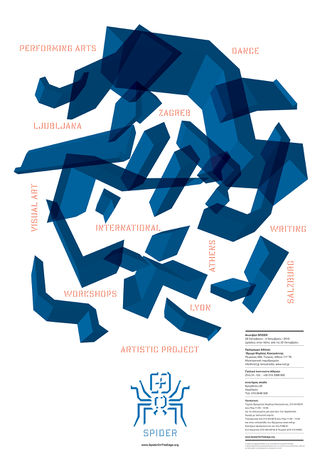 Defying categorical delineation, the Spider project is at once an "itinerant" contemporary dance and performing arts festival, a transnational artistic network, a platform for modular and transferable artistic projects and a potential for mobility and residencies. While its main production vehicle is the Ljubljana-based Pekinpah Association, the actual nodal points until now have been the specific artistic communities based in Athens, Berlin, Brussels, Ljubljana, Lyon, and Zagreb.

Though Spider operates through various activities, its primary output are events and festivals, the first one of them organised in Greece in 2010. A year after, the annual festival manifestations of Spider started in Slovenia as well, taking place at Španski borci Culture Centre. Other editions of this festival also happened in the aforementioned cities, sometimes alongside local festivals (as for example in Athens, with Arc of Dance & Modul dance festival 2014), but usually standing on their own. Between 2012 and 2014, about 40 international co-organisers were involved in making the events happen.

Spider was initiated by three dancers and choreographers: Matej Kejžar (Slovenia), Michaël Pomero (France), and Antigone Gyra (Greece) as an international interdisciplinary structure that could transcend the established national borders, festival formats and artistic practices. They engaged various artists from different cultures and from various artistic fields and milieus (dancers, choreographers, musicians, writers, sculptors, visual artists), soon temporarily enlarging the urban triangle of Athens-Lyon-Ljubljana with events in Zagreb, Salzburg, and Maribor (the latter in the context of Maribor, European Capital of Culture 2012 programme).

The first Spider Ljubljana was held in 2011 in Španski borci Culture Centre. It lasted three days and in partnership with En-Knap Productions and ŠKUC Association hosted dance performances, workshops (on dance, visual creation and writing), discussions and parties. A year later, the same place hosted the international dance project Spider: At Once, and in 2013 – under the name Spider Expand! – a festival was once again organised, hosting artists from Slovenia, Croatia, France, Belgium, Austria, the Netherlands, Hungary, Brazil and the United Kingdom. The festival then moved to Stara Elektrarna - Old Power Station and called itself Spider White in 2014 and Spider Slang in 2015, still bringing an exciting and non-genre bound programme, from body art to contemporary dance, from exhibitions to concerts.

Due to the collaborative nature of Spider, it means that these artists were hosted in other city nodes of the network as well.