The ŠKUC Association is one of the leading organisations for the promotion of non-profit artistic activities in Slovenia. It was formally established in January 1972 as ŠKUC Student Cultural Centre, though its origins may be traced back to the radical Ljubljana student movement of 1968. In the late 1970s and 1980s ŠKUC was one of the most important supporters and promoters of alternative culture. Student Cultural Centre is an independent producer in several artistic fields and an important agent in the civil society.

Visual arts - in the late 1970s Škuc Gallery was an important alternative to the mainstream and established galleries and arts institutions in Slovenia. Located at 21 Stari trg in Ljubljana since 1978, it subsequently became the centre of alternative (sub) culture in Slovenia during the 1980s. Since its inception the Gallery has been engaged in the presentation of contemporary Slovene art on the international scene. Today its activities include one-man shows by as yet unknown young Slovene artists, exhibitions and projects outside the gallery featuring established young artists from Slovenia, exhibitions by visiting young curators and artists, co-operation with established European institutions and galleries, publication of art books and organisation of lectures and workshops. The Gallery has become one of Slovenia's most important fine art publishing and documentation centres. Information about current exhibitions and other activities can be obtained at ŠKUC Info Centre, and at the ŠKUC Gallery website.

In the late 1980s ŠKUC has created notable street and ambient performances. Some of today's well-recognised theatre actors and groups sprang from that movement. In 2000 ŠKUC Theatre was revived by Alen Jelen after a long period of inactivity. Its work is focused on the so-called 'chamber performances' involving young professional theatre artists as well as students of play, staging world premieres and debut performances in Slovenia, as well as texts dealing with the problems of marginalised groups in society. The annual production comprises three performances of its own production or in co-production with other groups and theatre houses. In 2012 Olga Grad received the Best Actress Award at the New European Theatre Action (NETA) festival in Vratza, Bulgaria.

Music - ŠKUC's contribution to the development of rock'n'roll has been very significant. It published the first punk record by Pankrti and hosted the first post-modern happening by Laibach. In the 1970s it was ŠKUC which organised the majority of concerts by international artists and a number of concerts of local musicians, and it was also the first to publish fanzines. ŠKUC sections involved in organising music events at that time were ROPOT, BUBA, ART ROCK and AFK. In the 1980s ŠKUC was the organiser of the famous Rock in Opposition festival (1980-1984), the Ankaran/Coastal Scene festival (1987-1994), and the Slovenia's most important pioneering rock event, Novi Rock (New Rock), whose origins date back to 1981. Music genres promoted by ŠKUC range from rock and punk to jazz, folkloric and classical music. ŠKUC actively promotes Slovene musicians abroad; sections actively engaged in organising concerts are ŠKUC Ropot, Buba Booking and Promotion, and the ŠKUC Club, which stages small concerts featuring various music genres.

Film - since 1974 the ŠKUC film section has contributed to the local film culture in Slovenia by showing alternative, avant-garde and experimental films and videos. From 1978-1994 it organised over 210 film projects in Ljubljana, involving over 1,000 screenings attended by around 120,000 people. It is also the organiser of Ljubljana Gay and Lesbian Film Festival, the oldest European film festival with this topic, which was established in 1984 as ŠKUC Magnus Festival. From 1978-1985, ŠKUC produced several experimental and alternative films of its own. Then in 1986 the ŠKUC centre for students' film expanded to become a professional organisation called Vertigo/Emotionfilm. Slovenia's first full-length animation film entitled Socialising the Bull was a co-production of ŠKUC and E-motion Film. Their latest co-production was Harmonikarji ('Accordion Players'), a documentary on six Slovene accordion players whose music ranges from Alpine folk to experimental music.

Publishing – ŠKUC's publishing activity was launched in 1972 when it set up Studia humanitatis, a series of translations of the fundamental humanist texts – this collection is now published by the publishing house of the same name. ŠKUC has also initiated a number of magazines and publications, including Emzin magazine (now independent and published by Emzin Institute of Creative Production), Revolver, a magazine for culture and politics with a homoerotic drive, Kekec, a gay tabloid, the lesbian magazine Lesbo and newslatter Pandora, and Rock Vibe, a magazine for rock and alternative music (also now independent and published both in print and on the internet by Rock Vibe).

Civil Rights – since the beginning of the 1980s, ŠKUC has embraced groups which were marginalised in Slovene society, making efforts to make people aware of alternative lifestyles. The Slovene homosexual movement began in 1984. Today, ŠKUC sections working actively in this field include Magnus (a gay section), ŠKUC LL (a lesbian section), and Roza Club (which brings together gays and lesbians). These are cultural and political organisations which are committed to socialising homosexuality. They organise Ljubljana Gay and Lesbian Film Festival, undertake educational activities relating to homosexuality and AIDS, and have set up GALfon, a telephone line to offer advice and information about various issues, including AIDS (the number 01 432 4089 is available from 7pm to 10pm each day). They also organise international camps, exhibitions and Pink Disco parties, run the Monokel and Tiffany clubs at Metelkova mesto Autonomous Cultural Zone, and publish magazines (Lesbo) and books in the Vizibilija and Lambda series. More information can be obtained at the online Slovenian Queer Resources Directory. The Lesbian Library at 6 Metelkova, Ljubljana is open on Thursdays and Fridays from 3pm to 7pm from January to June and from September to December; books are only available for reading in the library. Ethnos is a section dealing with ethnology and cultural anthropology and is involved in the application of these disciplines in the urban culture and social life. Each year ŠKUC helps to organise two international camps for volunteers.

Established in 1998, ŠKUC Info Centre is an information centre for young people which forms part of the Ljubljana Network of Info Points (L'MIT). Its main task is to offer information about all areas of interest, including spare time, culture in the broadest sense of the word, education, scholarships, employment opportunities, youth tourism, active holidays, health, hobbies, voluntary work, help in distress, and youth organisations and societies. It seeks to make young people aware that they have the right to be informed. The Centre also sells tickets for concerts organised by ŠKUC; holders of the EURO<26 and ISIC cards are entitled to a 10 per cent discount.

Other activities - the Biennial of Young Artists from Europe and the Mediterranean is an event that brings together young people from the above areas. The Biennial presents art works from various areas of artistic activity and the age limit for participation is 30 years.

The ŠKUC premises at 21 Stari trg, Ljubljana, are open to many organisations which, in co-operation with the ŠKUC Club, organise events such as round tables, seminars, talks with journalists, dance performances, lectures on various social, art and topical issues, video projections, etc.

Each year, the ŠKUC Club organises the Living Literature Festival, a literature and music event held each June in front of Škuc Gallery. The festival presents local and foreign writers, poets and musicians. Puppetry and visual art workshops and performances are also held each year in November and December, inviting children to unleash their imaginations by making puppets, and through drawing, painting and other activities. 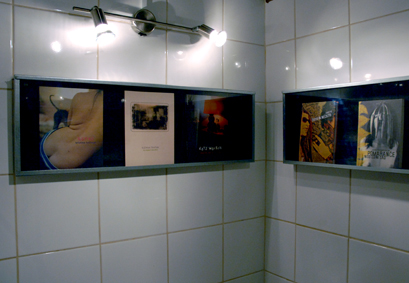