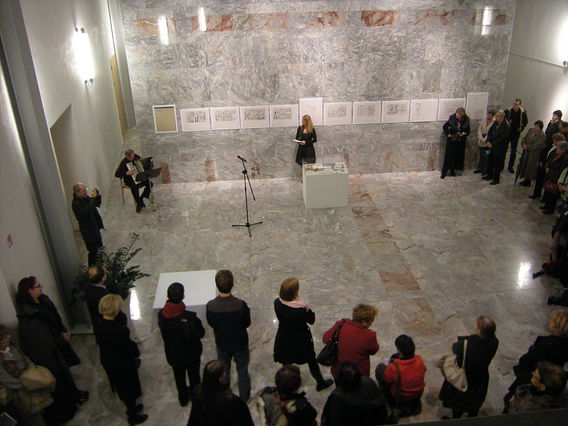 Sokolski dom was established in 1922 by the Sokol gymnastic club and served as a sports hall until 1981. In 1999 it reopened its doors and was used as a provisional performing arts venue, enthusiastically maintained by the Lubnik Choir. The Municipality of Škofja Loka has renovated the centre in 2009 with the funds obtained from EEA Norway Grants (Lively Old Town project) and the European Fund for Regional Development. The centre now plays an important role in local culture and also shelters many non-formal and non-professional artist groups and associations.

In the centre there are two halls, large gallery space and also the terrace garden which is mostly used for receptions. The large Crystal Hall can host up to 210 visitors and is mainly used for concerts and conferences while The Small Hall has 40 seats and is suitable for smaller events and lectures.

The main gallery activities started in 2002 due to the lack of suitable exhibition spaces in Škofja Loka although first exhibitions date back to 1998. The gallery hosted many Slovenian photography and fine arts exhibitions as well as exhibitions from amateur artists, either individually or as part of a local associations and groups.

The gallery programme in the main exhibition space kicked off with illustrations by Zvonko Čoh, followed by paintings by Jurij Kalan. The 20th anniversary of the death of Ive Šubic (1922–1989), a Partisan, local painter, graphic and illustration artist was commemorated with an exhibition of rarely seen selected drawings.