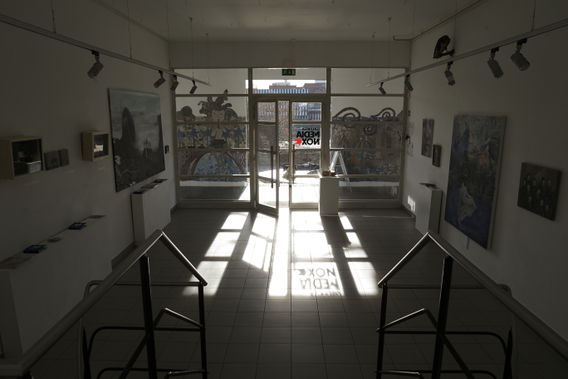 Media Nox Gallery seeks to showcase the development of new artistic scenes. It presents work of various media, including painting, sculpture, installation, photography, and design, mostly through group exhibitions by young emerging artists, theme-related exhibitions, and exchange exhibitions (such as the Maribor/Graz exchange with Austria). It also serves as a venue for lectures, literary events, concerts, and screenings organised by MKC Maribor in cooperation with various cultural organisations.

In the previous years the programme has included an installation by Tacita Dean, sculpture by Franc Purg, jewellery by Lara Bohinc 107, photography by Luciano Kleva, and recent work by Belgrade cartoonists. Recently the gallery has focused on presenting emerging artists including the students of the Faculty of Education, University of Maribor and curated by Mario Berdič.

They also run an Online Shop selling art works from young artist in order to financially help them.

At the end of 2020, it will celebrate its 30th anniversary. Its programmatic and spatial predecessor was Gallery 88. Media Nox, which means midnight in Latin, was the name Nadja Čobal came up with. She was the original creator of the new program design of the Media Nox Gallery. In the first year of its operation, a series of exhibitions were organized by students of the Ljubljana Academy of Fine Arts and Design, especially postgraduate students, members of the generation that will create the Slovenian art scene in the future (S. Grajfoner, D. Golija, etc.). The initiator's primary focus was to present as many talented young artists as possible from different backgrounds but also to expose o the public young Maribor artists.

In 1996, together with MKC Maribor Youth Culture Centre, the gallery had to move out of Orožnova Street, and by 2000 it had existed as an online gallery. Since November 2000 has a new gallery space in the Jewish Street. The first exhibition to open new premises was the exhibition of the Maribor Faculty of Pedagogy Department of Pedagogy of Art. The gallery also followed its original goal at the new location, presenting quality local and foreign young artists. In terms of content, it also focused on intermedia exhibitions, digital projects and performances.

Dialog, an exhibition by Matej Čepin and Tomaž Milač at Media Nox Gallery, 2017.

The opening of exhibition by Nuša Košar, Media Nox Gallery, 2017.