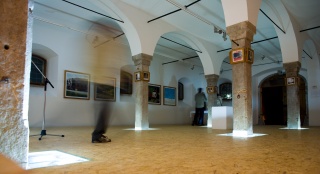 Established in 2006 as a non-profit space, the Simulaker Gallery has grown into the most important space for presentations of contemporary art practices in the southeast region of Slovenia. Located in the old town centre of Novo mesto in a 160-square-metre renovated stable for horses, the programme was initially run by curator Iztok Hotko. In spring 2009 the gallery initiated an annual project entitled The First Chance, presenting artworks of art students from art departments round Slovenia or internationally.

The gallery collaborates also with the local branch of the Union of Slovene Fine Arts Associations and Fotopub Festival of Documentary Photography.

Administered by the Novo mesto-based organisation LokalPatriot, Simulaker Gallery showcases all forms of contemporary visual arts. In the recent years the space has featured more than 10 exhibitions annually. Although open to international cooperation and international artists, the programme pays strongest attention to younger generation Slovene artists. The space was inaugurated by the painting exhibition Transsubstanciacije of Uroš Weinberger (also a member of the local Moveknowledgement music group).

Besides internationally respected Slovene artists such as Marija Mojca Pungerčar, the new media artist Janez Janša (formerly Davide Grassi) and son:DA (both have already prepared 2 projects here), the exhibition programme has continued further with nationally-established young artists such as Vesna Bukovec, Suzi Bricelj, Viktor Bernik, and Borut Peterlin, among others.

In the beginning of 2007 the group exhibition Ctrl C presented international art works questioning and reflecting the phenomena of artistic uses of the digital copy and the digital original. This exhibition derived from the documentaX, the work by Slovene net.art pioneer Vuk Ćosić and featured also 10101010101010.org, Rtmark - The Yes Men, and Gordan Karabogdan & Nikica Klobuča.

In 2008 the gallery exhibited the solo exhibition Mrežne strukture of Miha Štrukelj, who later represented Slovenia at the Venice Biennial in 2009 at A plus A, Slovenian Exhibition Space. Photographic works of Bojan Radovič, featured in the exhibition entitled On Photography [O fotografiji] in the beginning of 2009, opened many fundamental questions on contemporary photography including the role of the photographer working for artists, as Radovič did for Roman Uranjek (Irwin) and his project entitled Skopje 6. 12. 2007.

In 2019 Simulaker Gallery hosted an exhibition of the first International Biennial of Artistic Vision entitled Etike(te)- Strah/Fear, organized by members of the Dolenjska Association of Fine Artists.

Simulaker has presented also solo exhibitions of Luka Prinčič, Sašo Vrabič, and the complex project The Lovest by Jaša (Mrevlje), who at the opening offered a specific micro-utopian atmosphere, which resulted in a film that opened questions about provocations and manipulations of (film) directors.

In spring 2009 the gallery started an annual project entitled The First Chance [Prva priložnost] with the aim to collaborate with institutions of higher education that have art-related programmes and give their best students an opportunity to present a gallery exhibition. The first edition of this national project with international intentions presented the sculpture department of the Faculty of Education, University of Ljubljana, mentored by sculptor Roman Makše. The 5 artists who received their first chance were: Tina Grobovšek, Meta Kos, Matija Lapuh, Matic Praznik, and Valentina Štirn.

Documentation and reviews of the past exhibitions

Inside of Simulaker Gallery in Novo mesto