Launched in 2000 by LokalPatriot Institute as an international summer photography workshop, the Fotopub Festival of Documentary Photography has since developed into a significant annual event dedicated entirely to documentary photography, with up to 10 exhibitions, a set of workshops, lectures, and screenings of photo-stories. Taking place in Novo mesto, a vibrant cultural centre of the Dolenjska region in south-east Slovenia, an intimate and vital festival has succeeded to bring to the city a summertime influx of international visitors interested in photography, acclaimed professionals, as well as photography lovers of all generations.

The Fotopub themes since 2008 were Human Footprints, Making Contact, Crossing Borders and The Private Eye in 2011, tackling trends within the photo documentary society such as the power of narrow narratives thriving on the Facebook platform. In 2012 the festival under the name Eurovision was in line with the Maribor, European Capital of Culture 2012 programme. The 2013 edition is dedicated to Alienation and curated by Klavdij Sluban. Matjaž Brulc, the artistic director of Simulaker Gallery, took over the management of the festival.

Fotopub festival features up to 10 exhibitions of documentary photography and multimedia projects. The exhibitions are set in the local visual arts institutions such as the Simulaker Gallery or Božidar Jakac Art Museum, Kostanjevica na Krki as well as in other public and commercial spaces.

Fotopub is also an arena for photographers, tutors, curators, editors, enthusiasts, and experts to meet in discussion. The festival has collaborated also with the London College of Communication. 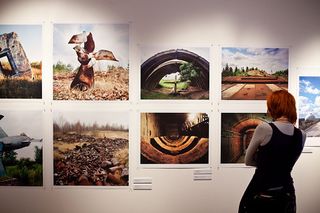 Fotopub can cater up to 80 students who work with 10 to 15 internationally acclaimed tutors. The programme consists of 6 days of intensive educational process at different levels: individual work, guided work on stories, level lectures in technique and composition, lectures in history of photography, mentor consultations, studio and field photography. Each participant produces her or his personal photo-story or a multimedia story under the guidance of a chosen tutor. The results of the workshops are presented in a final group presentation.

The workshops are often set in an informal environment – in parks, local cafés, and pubs – where tutors, students, local community members, and visitors mingle, looking for less obvious stories. The workshop participants work on selected themes such as journalistic photography, aesthetics vs. ethics, etc.

Fotopub is a national coordinator of the Photography Experience, a photography competition for young people related to cultural heritage. The initiative is conducted as a part of the European Cultural Heritage Days by the autonomous Community of Catalonia, which each year organises the International Heritage Photographic Experience (IHPE), which is supported by the Council of Europe.

Before the opening of an exhibition during the annual Fotopub Festival of Documentary Photography, in Novo Mesto, summer 2010