Walk of Peace in the Soča Region Foundation

The Walk of Peace in the Soča Region Foundation was established in 2000 in order to manage, preserve and restore the remains of the infamous WWI Isonzo Front and was later delegated to set up and manage the Walk of Peace ("Pot miru") trail. This currently 320-kilometre-long trail follows the Isonzo Front and connects the many heritage and memorial sites – including 15 outdoor museums – along the former front. In 2016, it was added to the UNESCO World Heritage Tentative List. 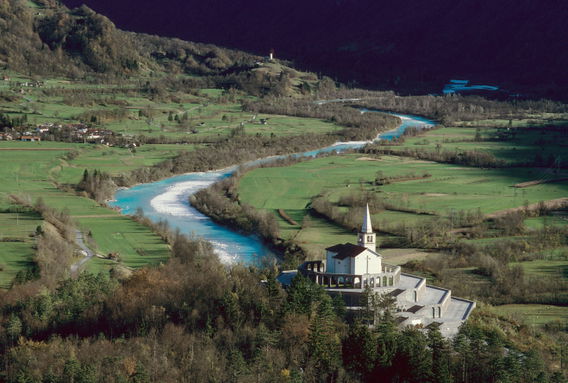 Besides managing the path project (and taking care of some of its outdoor museums), the foundation has set up a historical library, established a list of the fallen Italian and Austro-Hungarian soldiers in the Upper Posočje regions (together with the Tolmin Museum) and opened a visitor centre in the town of Kobarid. The latter features a small interactive exhibition, some conference rooms and a gallery that occasionally hosts various events and historical as well as artistic exhibitions.

The foundation is a member of the National Committee for the Commemoration of World War I Anniversaries, founded by the Government of the Republic of Slovenia.

The Walk of Peace from the Alps to the Adriatic

The Isonzo Front was the site of 12 major battles between Austro-Hungarian and Italian forces in World War I. Roughly following its non-linear course, the Walk of Peace starts in the village Log pod Mangartom and finishes in Trieste (IT), on its way passing the Upper Soča Valley, the Nova Gorica area, the adjacent Brda Hills, the Kras plateau, etc.

Some of the featured heritage sites are the Kluže Fortress, the Kobarid Museum, the Kolovrat Outdoor Museum, the Vršič Chapel, the Bohinj Railway, the so-called Kras Walks of Peace and a number of caves, fortifications, trenches and cemeteries. It is worth adding that the natural sights along the path are also extremely remarkable. 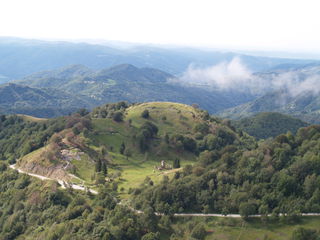 The foundation has collaborated with a number of municipalities, cultural institutions and tourist associations, both from Slovenia as well as Italy, in order to expand, renovate and connect the sites. While the upper part of the path was opened in 2007, its entire course was connected and roughly finalised in 2015. In the future, the foundation plans to connect it with other parts of the South-Western Front and prolong it into the (Austrian) Carinthia and Tyrol regions.

Completed in September 1938, inaugurated by Benito Mussolini, the Italian ossuary contains the mortal remains of 7014 identified and unknown Italian soldiers who fell on the Soča Front. Part of the Kobarid Museum's outdoor museum tour

A picture of the Outdoor museum Kolovrat, which features fortifications, tunnels and other remains of the Isonzo front. The museum is taken care of by the Walk of Peace in the Soča Region Foundation and lies on the border between Slovenia and Italy.

The gallery space at the Walk of Peace in the Soča Region Foundation information centre in Kobarid, where they hold various exhibitions and have hosted, for example, a work by the the Domestic Research Society.

World War I tranches, found in the Monfalcone Theme Park of the Great War, which is also a part of the Walk of Peace.

An interactive exhibition set at the Walk of Peace in the Soča Region Foundation information centre in Kobarid.

A World War I cemetery on the bank of the Soča river. One passes it on the lower part of the Walk of Peace.

An Italian charnel house above the town of Kobarid. Dedicate to those fallen in WWI, it is featured in the Walk of Peace.
Retrieved from "https://www.culture.si/w/index.php?title=Walk_of_Peace_in_the_Soča_Region_Foundation&oldid=272996"
Categories:
Hidden categories: