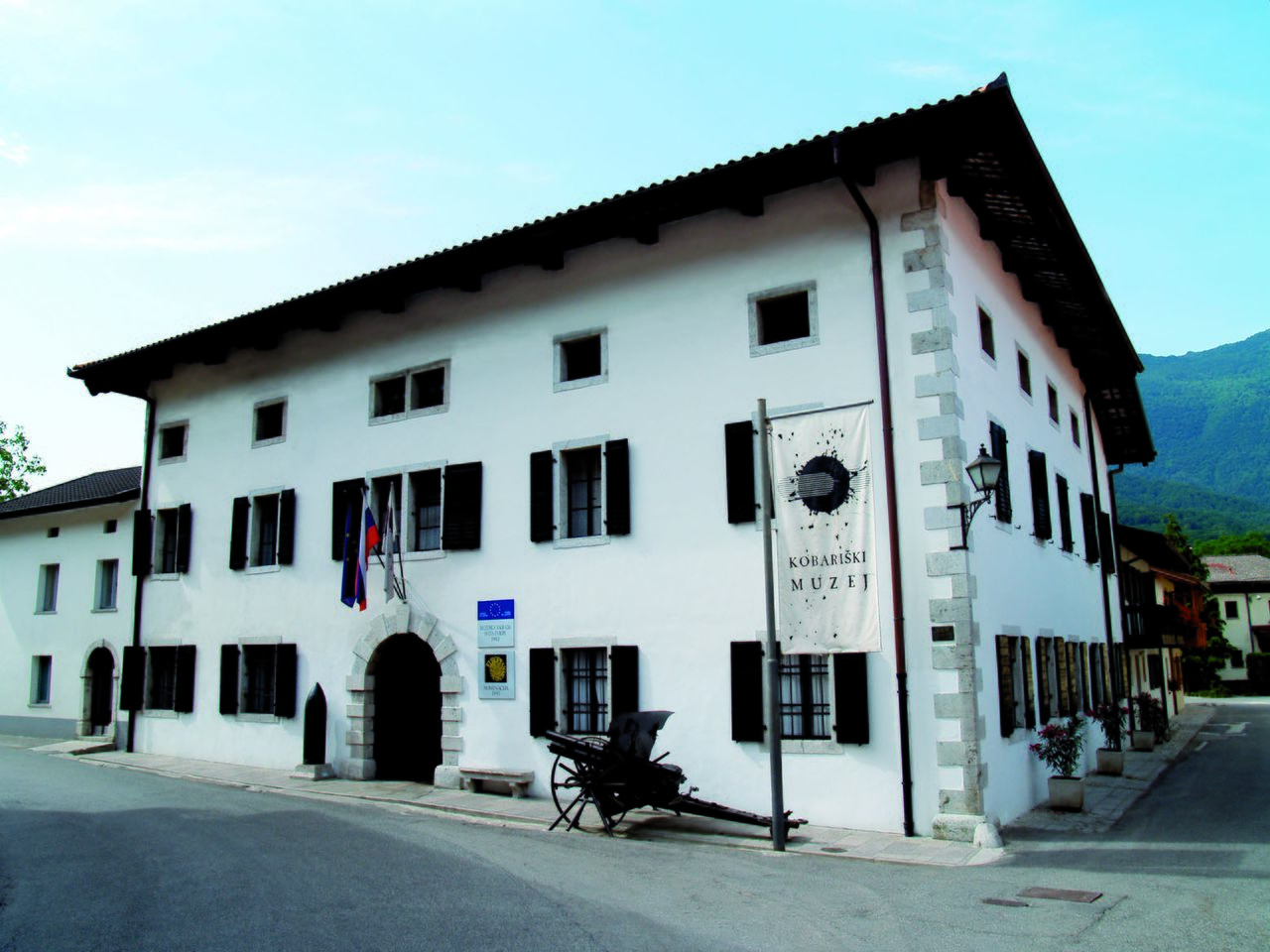 Kobarid Museum seen from the street

Kobarid Museum is devoted to the Soča (Isonzo) Front of the First World War. The valley of Soča River saw no fewer than 12 battles between the Italians and the forces of the Austro-Hungarian empire between May 1915 and November 1917, making it a battlefield of extraordinary proportions, even for World War I. The exact death toll has never been established. While talk used to be of over a million, historians now say that at least 300,000 soldiers died in three years of fighting.

Established in 1990 in the Slovene town Kobarid (called Karfreit when part of the Austro-Hungarian empire, and Caporetto under the Italians) near the Italian border, the Kobarid Museum won the prestigious Council of Europe Museum Prize in 1993. The permanent exhibition is unique in that it does not favour any side in the war, there are just men fighting, losing lives and being mutilated under heavy fire or harsh weather conditions in a war where industry and money make a difference, not man power, courage or effort. It is a museum about war that leaves an impression of deep pacifism.

Accommodated in a renovated house in the vicinity of the town's main square which once housed an Italian military court, the museum displays an amazing collection of military equipment, photographs and personal belongings of soldiers fighting at the front.

The entrance foyer symbolically introduces visitors to the theme of the permanent exhibitions with maps that present Europe's World War I battlefields and the reshaped political borders at the end of the war, with flags, portraits of soldiers of many nationalities and gravestones from the military cemeteries in the Upper Soča Valley region. Because of its location at the junction of the Soča and Nadiža valleys that link Friuli and Carinthia, Kobarid was the scene of numerous invasions and wars, the most ferocious one being during the First World War.

The Krn Room presents the initial assaults along the Soča River after Italy's entry into the war in 1915. Italian alpine troops achieved the first major victory on the Soča Front with the capture of Mount Krn, when in June 1915 they wrested this 2,245 metre peak from the hands of its Hungarian defenders. The central exhibit of this room is the 1:1000 scale model of Mount Krn, Mount Batognica and neighbouring peaks. Many visitors study the model carefully before taking the guided tour of this highest part of the former battlefield, or alternatively upon their return from the unforgettable open-air museum.

The White Room tells of the suffering of the soldiers in the cruel environment of the karst (limestone) mountains during winters with 6 (and sometimes more) metres of snow. 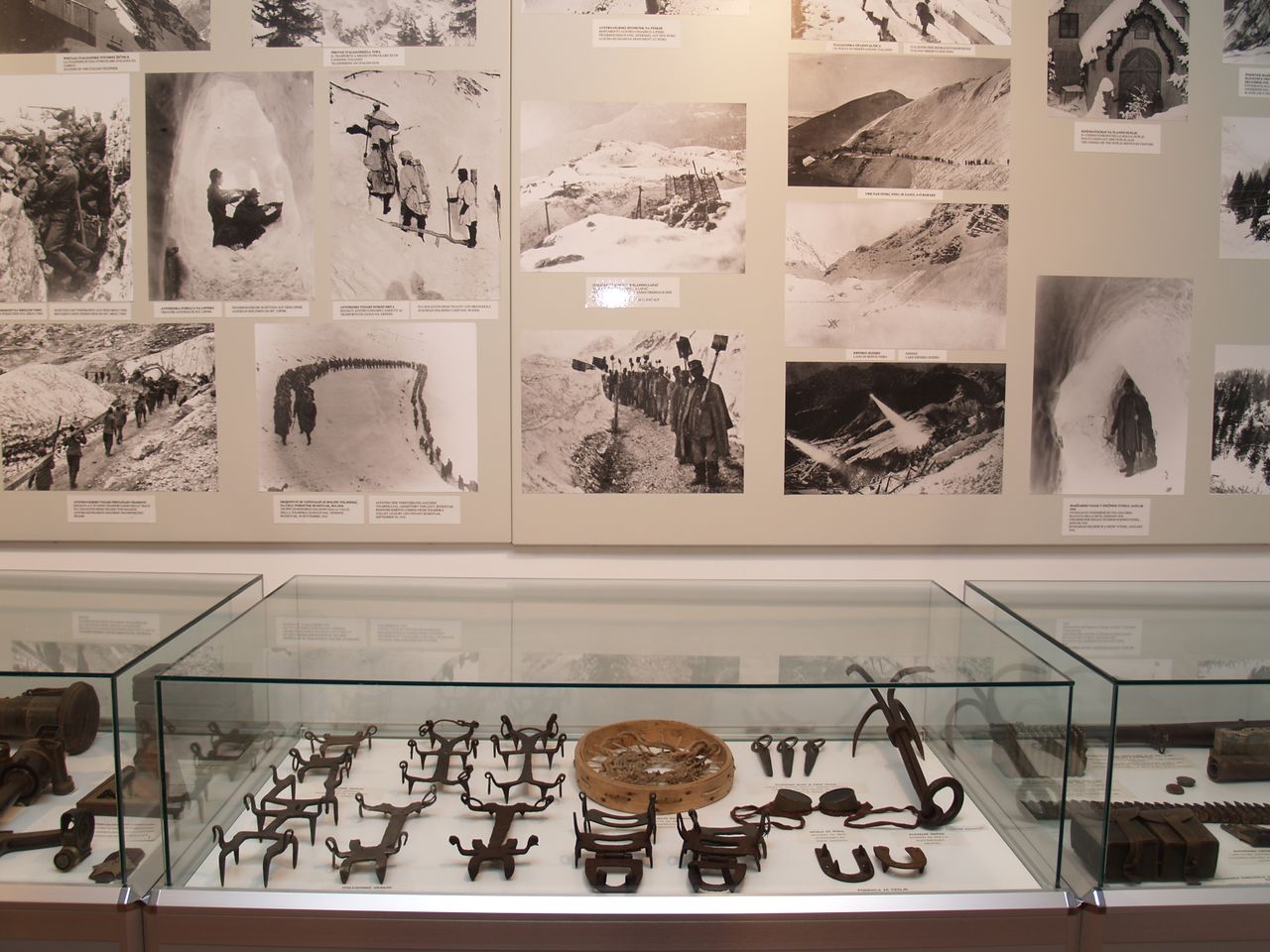 The White Room tells of the suffering of the soldiers in the mountains during the twenty-nine months of fighting on the Soča Front.

The Hinterland Room illustrates how the area behind the lines of the Soča Front became a genuine anthill of hundreds of thousands of soldiers and workers scattered from Mount Rombon to the shores of the Bay of Trieste.

The story of the 29 months of fighting for positions along the Soča River concludes in the Black Room, where photos, crucifixes and sculptures made by soldiers are on display.

The third floor depicts the final campaign of the Soča Front and the twelfth Soča battle, the counter-offensive by elite German and Austro-Hungarian units called the Battle of Kobarid (also, the Battle of Caporetto). The scale of this task is illustrated on a 1:5000-scale relief model of the Upper Soča River region and large maps showing the movements and distribution of military units. The preparations for the battle and its course are documented with numerous photographs, taken largely in the second half of October 1917 and during the first days of the fighting, which present most comprehensively the events in the Bovec basin, including the German attack with gas shells on the troops of the Friuli Brigade, the breakthrough of the 12th Silesian Division from Tolmin toward Kobarid, and the movement of first-lieutenant Erwin Rommel's unit across the slopes of the Kolovrat mountain range to the peaks of Mount Matajur. A very detailed description of these events is presented in the 19-minute multivision video programme, which can be viewed in four languages.

The museum upgraded its multimedia equipment in 2005, acquiring new archives and making a new documentary about the museum to mark the 90th anniversary of the beginning of this bloody World War I battleground.

The Kobarid Historical Trail leads visitors to places in the surroundings of Kobarid where there are significant historical, cultural, and natural points of interest. It is 5 kilometres long and it takes 3 hours to see historical sites around the historical town of Kobarid. Major stops along the trail besides the Kobarid Museum are: Roman settlement at Gradič, Italian ossuary, Tonocov grad, Italian defence line, Soča Canyon, Kozjak Falls, Italian defence line and Napoleon Bridge. 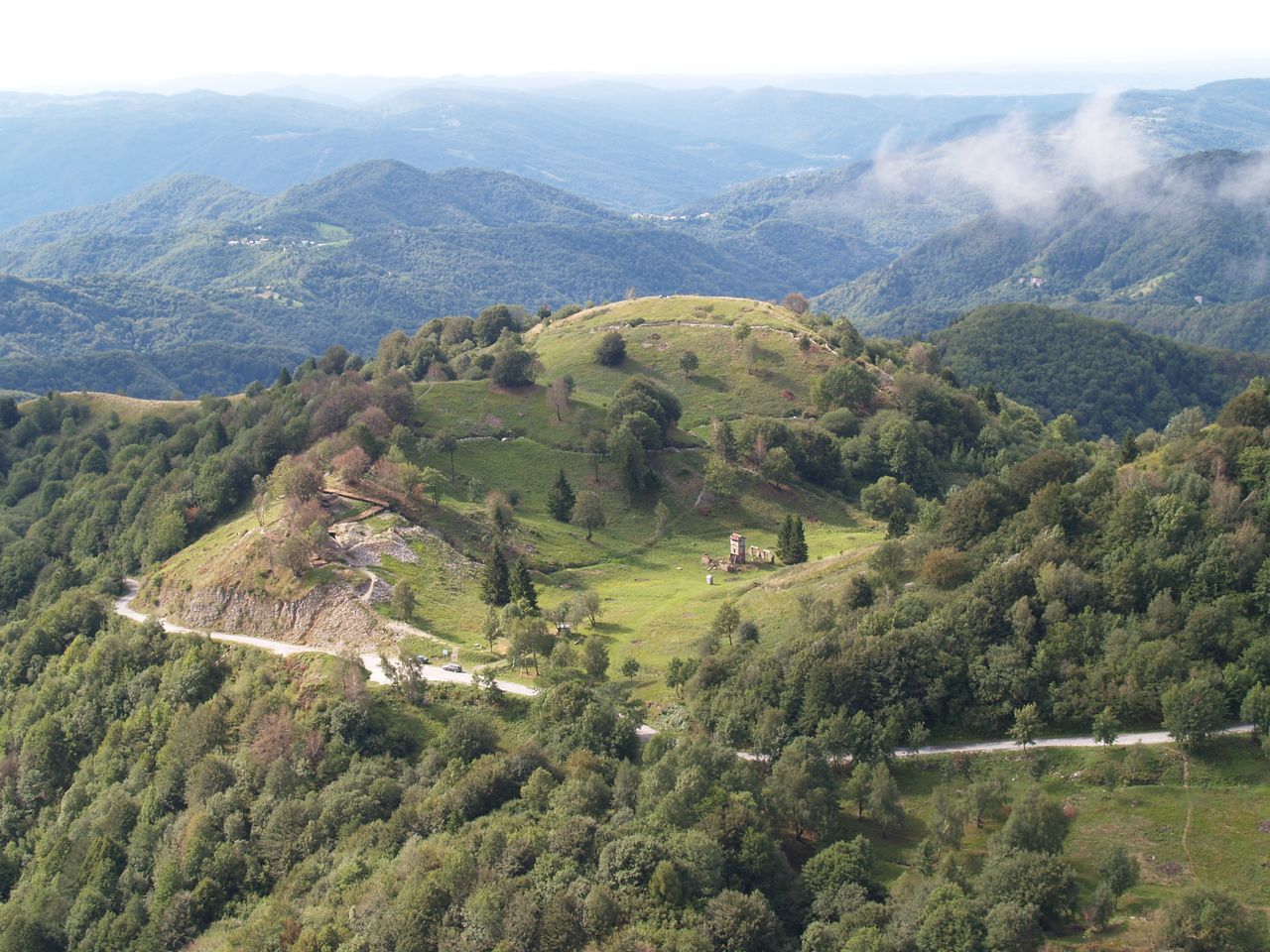 The Kobarid Historical Trail leads visitors to places in the surroundings of Kobarid where there are significant historical, cultural, and natural points of interest.

For those with some trekking experience wishing to explore the historical battle field, 5 mountain trails from 3 to 10 hours are available to visit with a museum guide. The very demanding tours to Mount Krn and Mount Batognica (8 hours) and to the Ridge of Kal to Mount Krnčica (10 hours) as well as the medium difficulty tour to Rommel's Route (6 hours) are the longest. The tour to Rommel's Route follows the route of the decisive breakthrough of the German and Austro-Hungarian forces on 26 October 1917 near Tolmin as Erwin Rommel, later known as Desert Fox, described in his book Infanterie greift an [The infantry attacks] (1937).

Two easier tours include one to the Ridge of Kolovrat to Mount Na Gradu (3 hours), and finally, the tour to Mount Mrzli Vrh (4 hours). All along the Soča River many rich and interesting private museum collections on remains from First World War can be visited on prior notice.

Next to the Kobarid Museum there is a Tourist Information centre with a spacious exhibition space where occasional temporary, art and history exhibitions are held. Also, there is the information centre for the Walk of Peace, a 230 kilometres long trail that crosses many of the sites with remains from the Isonzo front and its aftermath.

The Kobarid Museum is an integral Slovene partner in international collaboration between Italian and Austrian organisations involved in researching and promoting a common history of the First World War and the Isonzo Front so that the whole southwest frontline can become a European Park of Memory. In order to preserve this heritage the Slovene Government adopted a 10-year programme in 2000 and established the Walk of Peace in the Soča Region Foundation as the head organisation for this national and international project. The objective of the project is to preserve, restore and present the historical and cultural heritage of the First World War in the area of the Isonzo Front for study, tourist and educational purposes. The foundation was supported also by the European Interreg IIIA program and Phare CBC Italia.

Other museums, collections and exhibitions 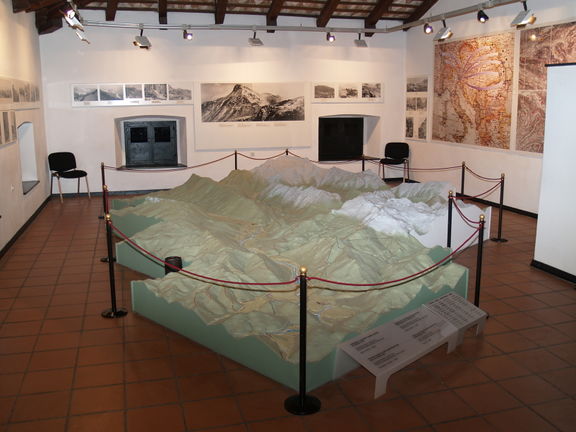 On the 3rd floor of Kobarid Museum large maps and a 1:5000-scale relief model of the Upper Soča River region show the movements and distribution of military units during the final campaign of the Soča front in 1917. 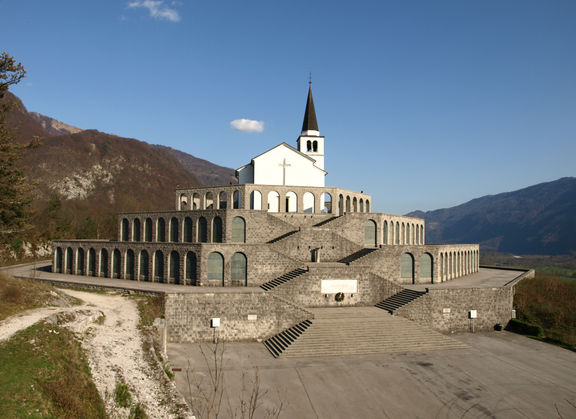 Completed in September 1938, inaugurated by Benito Mussolini, the Italian ossuary contains the mortal remains of 7014 identified and unknown Italian soldiers who fell on the Soča Front. Part of the Kobarid Museum's outdoor museum tour 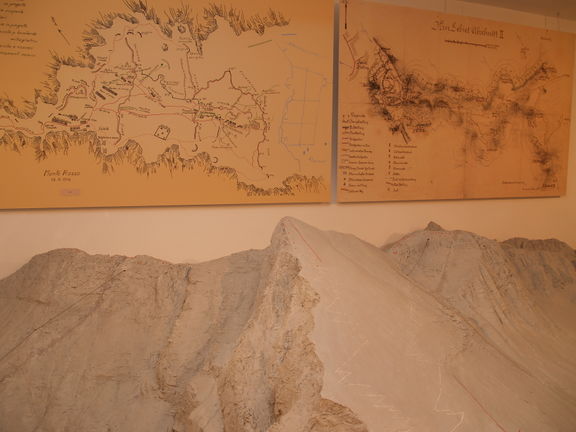 In the Krn Room at Kobarid Museum the central exhibit of this room is the 1:1000 scale model of Mount Krn, Mount Batognica, and the neighbouring peaks. 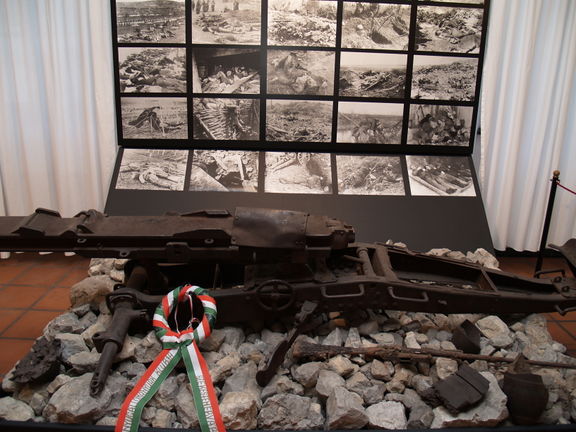 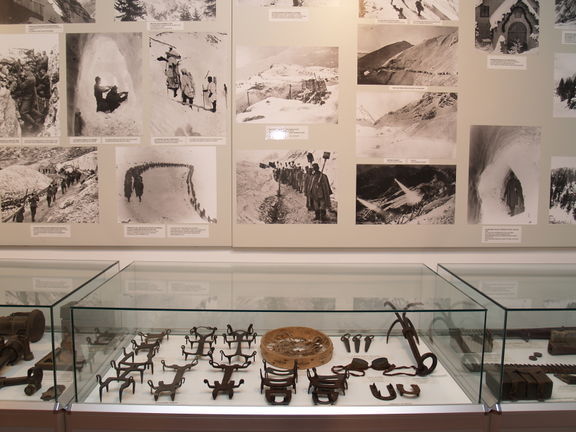 The White Room tells of the suffering of the soldiers in the mountains during the twenty-nine months of fighting on the Soča Front. 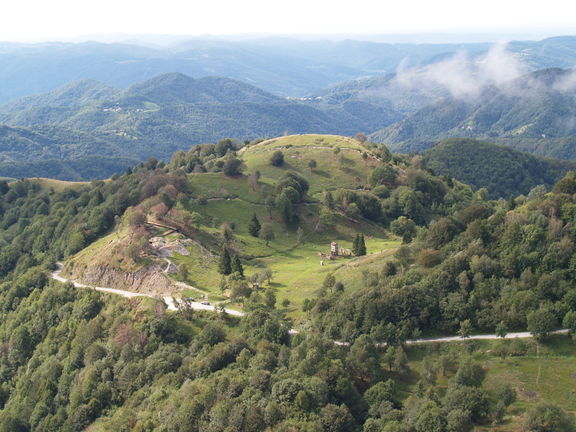 The Kobarid Historical Trail leads visitors to places in the surroundings of Kobarid where there are significant historical, cultural, and natural points of interest. 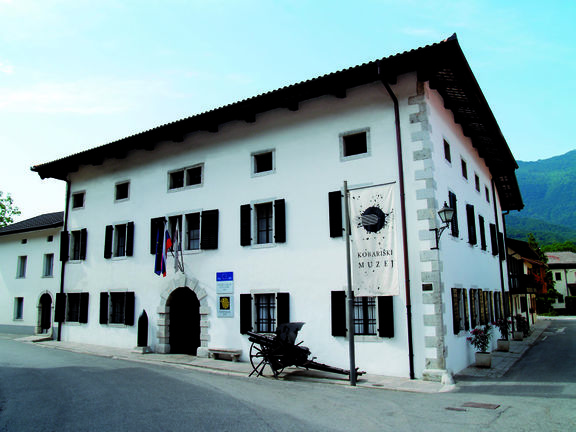 Kobarid Museum seen from the street 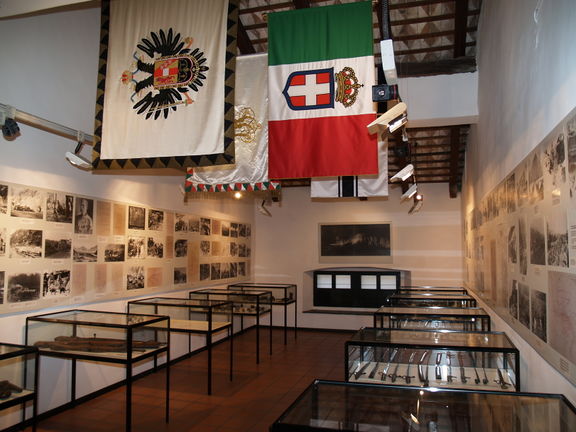 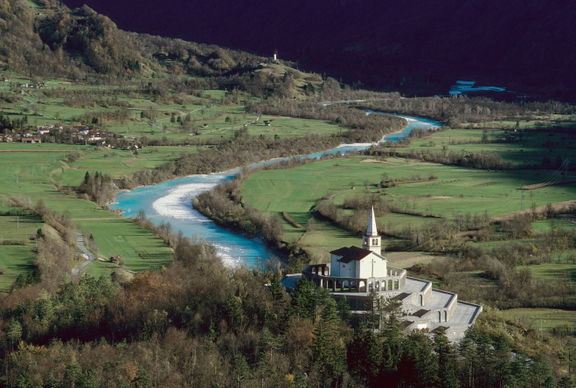