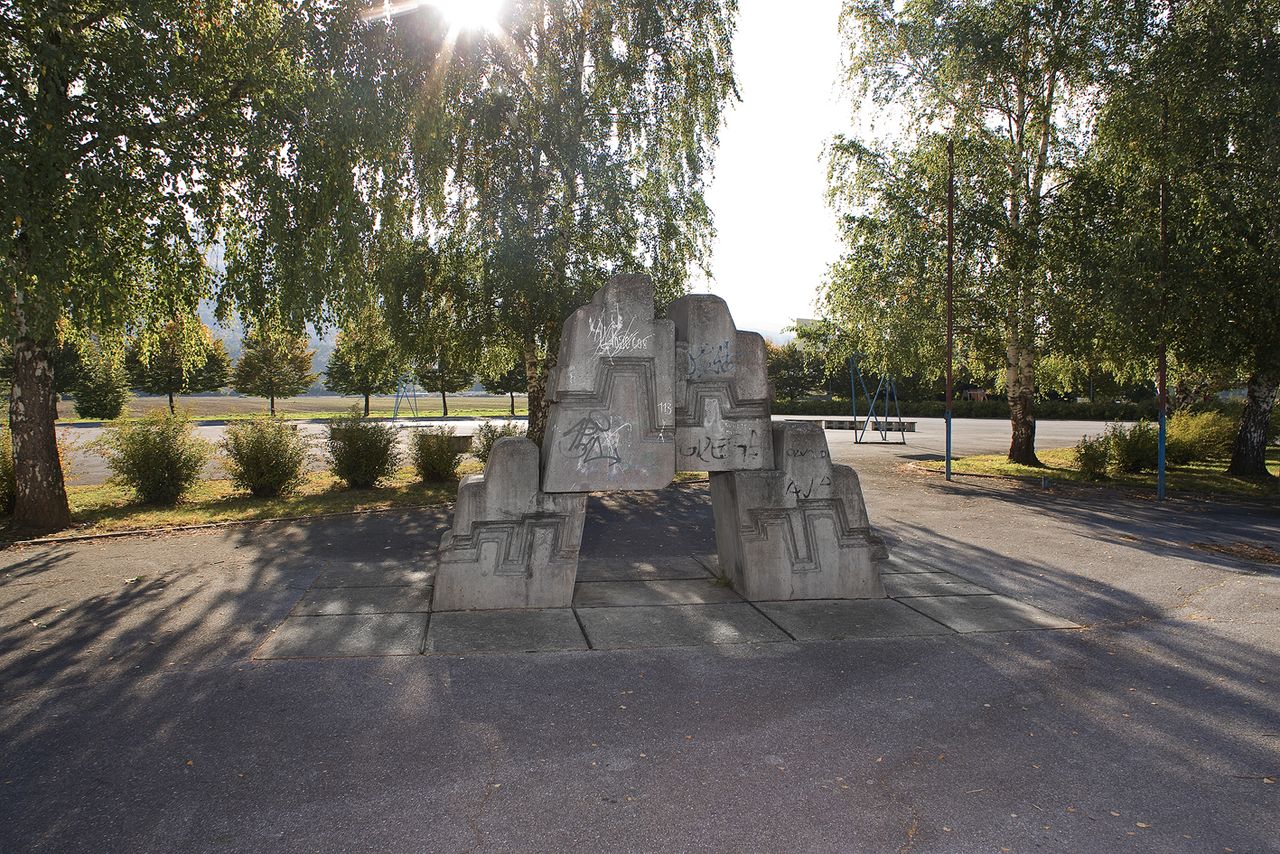 A concrete sculpture by Dragica Čadež Lapajne (SI), made in 1986 and standing in front of the Primary School Gustav Šilih in Maribor, 2008

Forma Viva Open Air Sculpture Collection, Maribor is one of several in Slovenia which arose under the auspices of the International Symposia of Sculptors called Forma Viva, an innovative project conceptualised as a regular gathering of artists from all over the world. They were invited to create various, often monumental sculptures according to their particular vision and style. These works are then incorporated into publicly accessible collections that bear the name of Forma Viva as well.

Each of the venues of the Symposia chose a site-specific policy for the materials used. Maribor's Forma Viva was conceptualised as a distinctively urban project that was supposed to reflect the expanding urban fabric of Maribor. Correspondingly the works, dispersed throughout the city, are made of reinforced concrete.

Initiated by the sculptors Jakob Savinšek and Janez Lenassi, Forma Viva was modelled after a symposium held in St. Margharethen (Austria, 1959). The first two symposia were organised in Kostanjevica na Krki (wood) and in Portorož (stone) in 1961. Later they were joined by Ravne na Koroškem (1964, steel) and in 1967 also Maribor.

The Maribor manifestation of Forma Viva was some time in coming. In 1967 it was finally realised as the local construction company Stavbar joined in, followed by two other businesses from the branch, Gradis and Konstruktor. All three played a substantial part in the project as not only that they've co-financed project but also lent their technological know-how required for individual pieces.

As compared to the Forma Vivas in Portorož and Kostanjevica na Krki, where most of the pieces are gathered is specially designated parks, the ones in Maribor and Ravne na Koroškem are spread over the wider urban region. Both of the cities were growing fast in 1960s and the installation of sculptures was meant to humanise their new, concrete-dominated urban spaces. It is worth noting that due to WWII air raids only a few public monuments in the city centre remained in Maribor and that the 19 pieces of Forma Viva as such represent very important landmarks.

The first three participants in the Maribor International Symposium were Tone Lapajne, Lino Tiné (IT), and Kudo Takeshi (JP). They installed sculptures very different in expression and concept, thus indicating the variety of possibilities offered by concrete. Particularly fruitful in this regard was the engagement of Bradford Graves (US, 1970), whose organic forms visually elevated an otherwise unarticulated space. In the same year the Maribor sculptor Vlasta Zorko Tihec enlivened the area in front of the Second Grammar School with a massive block featuring contrasting softly modelled details.

The optically varied layered ball of Slavko Tihec (1973) attractively dominates the municipal park with its harmoniously elaborated floor area. Also created in 1973 is a remarkable piece by Janez Boljka, which unlike the others is fixed onto the façade of an apartment block.

Outside the town, on one bank of the Drava River, stands a minimalist sculpture of the Polish artist Maciej Szankowski (1977), whose design of a "door" effectively blends with the river landscape. An interesting sight is Lujo Vodopivec's fountain (1977), situated in front of Hotel Slavija. It was later removed and today stands in front of Maribor's RTV building, although no longer serving as a fountain.

In 1983 a concrete spiral by Japanese artist Harunori Fujimote rose among the high blocks of flats, and in front of the new VEKŠ building a more intimate sculpture by Mojca Smerdu was erected. Three years later participants in the International Symposium included the American sculptors Will Nettleship, who created the "walk-over" floor sculpture beside the Maribor Art Gallery, and Robert Adzema, who marked a "sunny" spot near the cemetery in Pobrežje with an original sundial.

The collection is taken care by the Maribor Art Gallery, which sometimes organises guided tours around the pieces. They've also created a map, accessible via web, which one can follow in order to visit all the works (see below). 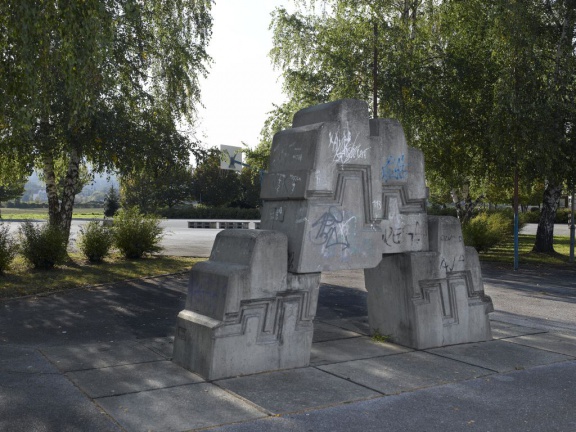 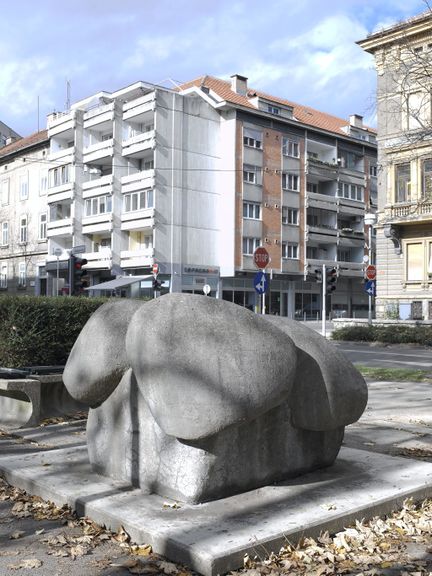 Flower (125 x 175 x 175 cm), reinforced concrete by Mojca Smerdu from 1983, located in front of the Faculty of Economics and Business, part of the Forma Viva Open Air Sculpture Collection, Maribor 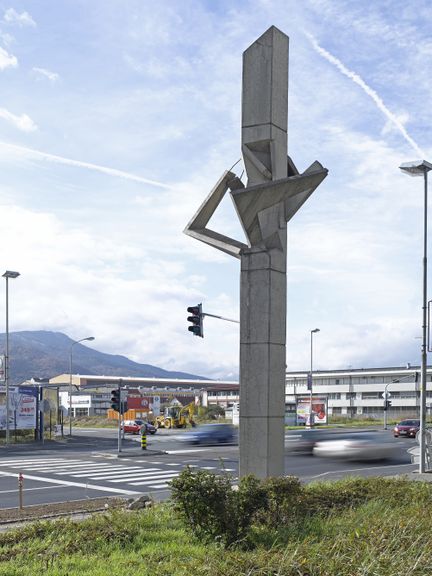 A concrete sculpture by Banzo Matsura, made in 1977 and standing on Ptujska cesta (Ptujska road) in Maribor, 2008 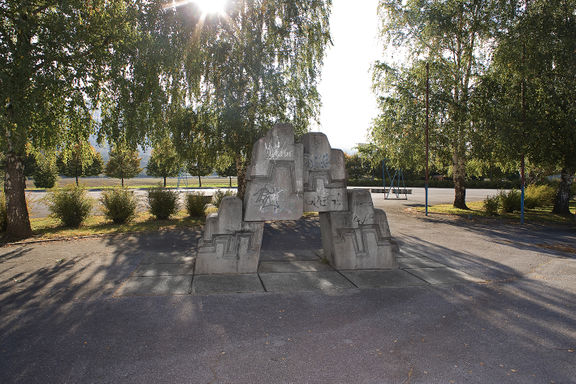 A concrete sculpture by Dragica Čadež Lapajne (SI), made in 1986 and standing in front of the Primary School Gustav Šilih in Maribor, 2008 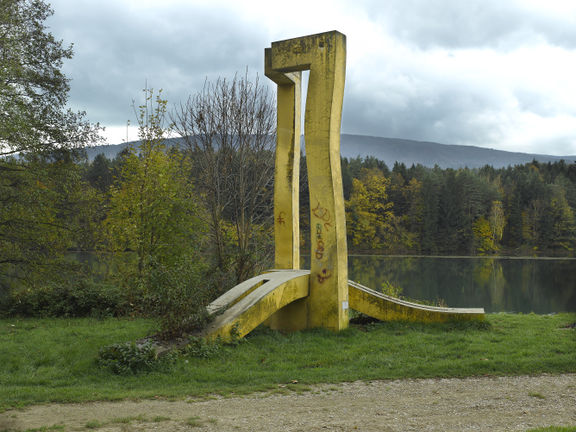