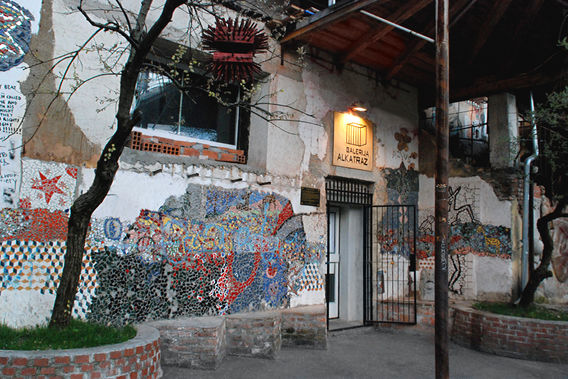 Situated in Metelkova mesto Autonomous Cultural Centre and run by KUD Mreža Arts and Culture Association, Alkatraz Gallery started out in 1996 as a project initiated by young students of the Academy of Fine Arts and Design. Since then, it has been actively encouraging experimental artistic endeavours, hosting various interactive, exploratory and site specific projects that apply very different approaches. Nevertheless, it sometimes also displays works that creatively use traditional media.

Its main goal and programme policy is to present fresh, yet unestablished artists and artworks to the public, thus mainly featuring projects of younger artists. In recent years, the gallery is actively visiting international art fairs, presenting its curated projects and working on international collaborations. Since 2010 it is participating in the Artyčok.TV, an open archive project led by the DigiLab of the Academy of Fine Arts in Prague and supported by the EU Culture programme, thus contributing to one of the largest archives covering the independent arts scene.

The gallery is located in a building called the Stables, which suffered extensive damage in the period when the old authorities withdrew. It stood derelict for quite some time, but in 1996 rebuilding and re-adaptation took place. Young students from the Academy of Fine Arts in Ljubljana, headed by Boštjan Drinovec and Nataša Tajnik, gave it content under the idea of an artists run gallery.

In 1998, Alkatraz started to work with the art historian Bojana Piškur, today the senior curator of Museum of Modern Art in Ljubljana, and the curator Jadranka Plut, who managed the gallery from 2000 up to 2018. They reorganised the programme and alongside predominately exhibiting local artists, began to work with more recognised and internationally active artists.

Since 2008, Alkatraz Gallery has been attending various annual art fairs, like the Volta Show in Basel in 2008, Viennafair in 2009 and 2010 and Preview Berlin 2010. Each time the Gallery presented selected works made by Slovene artists like Damijan Kracina, Nika Oblak, Primož Novak, and Tomaž Tomažin.

The gallery regularly collaborates with festival organisers and other visual arts organisations, mostly those based at Metelkova mesto. Its partners include SCCA-Ljubljana Centre for Contemporary Arts, the City of Women International Festival of Contemporary Arts, the International Feminist and Queer Festival Red Dawns, the Biennial of Graphic Arts and the Photonic Moments – Month of Photography. It also cooperated with the Prostor Gallery, together presenting the project of the Brazilian artist Camila Rocha.

Since 2006, Petja Grafenauer, Jadranka Plut, and Zoran Srdić have been organising "Contemporary Art Tea Parties" as a joint project of KUD Mreža, the Alkatraz Gallery and the GULAG Institute for Contemporary Art and Culture. These monthly events, which were encouraging public discussions of current issues in contemporary arts, have later faded into an annual event and in 2009 accompanied the Biennial of Graphic Arts.

Located within the Metelkova mesto, a cultural centre grown on the site of the former army barracks, the Alkatraz Gallery is known for its specific look: the façade is covered almost entirely with mosaics and different sculptures, vreated over the years.

Alternative historization of the alternative, the exhibiton of Matija Praznik at Alkatraz Gallery, 2017.