The Igor Zabel Association for Culture and Theory was founded in February 2008 by Mateja Kos Zabel, Bojan Zabel, and the ERSTE Foundation.

The primary aim of the association, based in Ljubljana, was to establish an international award for culture and theory dedicated to the memory of Igor Zabel (1958–2005). The association seeks to highlight the importance and ongoing influence of Zabel's work, to promote knowledge-sharing and networking in contemporary visual arts and culture and to encourage cultural dialogue in the Central and South Eastern European region and beyond. In 2010 it organised its first international symposium Contemporary Art Exhibition as an Artwork, Curator as an Artist in the Museum of Modern Art.

In 2016 the first book within a new IZA Editions appeared: When Attitudes Become the Norm: The Contemporary Curator and Institutional Art is a collection of essays and interviews by art historian and theorist Beti Žerovc. The new book series in English is a joint publishing endeavour by Igor Zabel Association for Culture and Theory and Archive Books (Berlin).

Igor Zabel was a Slovene curator, writer and cultural theorist who, during his entire life, was actively involved in many fields of theory and culture – as a philosopher, author, essayist, modern and contemporary art curator, literary and art critic, translator, and model for new generations of curators and critics of contemporary art. As a curator and writer, he tirelessly called for the profound exploration of those political, social and cultural undercurrents that had the potential to give us a better understanding of the post-communist world of today.

From 1984 to 1986 he worked as free-lance writer and since 1986 as curator of Moderna galerija (Museum of Modern Art). In his work as curator he organised numerous exhibitions at the Museum of Modern Art presenting artists from Slovenia and abroad. From 1998 to 2000 he was coordinator of Manifesta 3 in Ljubljana. In 2003 he curated the show Individual Systems as part of the 50th International Art Exhibition at the Venice Biennial.

Zabel also published two books of essays on contemporary art and a number of essays and articles in catalogues and magazines. He was editor of the magazine of the Museum of Modern Art M’ars and co-editor of the journal of contemporary curatorship MJ Manifesta Journal.

In November 2012 Contemporary Art Theory, a comprehensive selection of Igor Zabel’s writings in the English language, was published by JRP Ringier in co-edition with Les presses du réel and Igor Zabel Association for Culture and Theory, ERSTE Foundation and Moderna galerija, Ljubljana. Zabel’s texts tackle modern and contemporary art from Socialist Realism and Conceptual Art to Post-Modernism and Contextual Art, particularly in Slovenia and Eastern Europe, and thus provide also insight into Zabel’s curatorial strategies. The book is edited by Igor Španjol and divided into four chapters: East-West and Between, Strategies and Spaces of Art, Ad Personam (individual artists and thematic phenomena) and Extras (selected columns on arts and culture).

In 2016 the IZA Editions series of books in English was launched by Igor Zabel Association for Culture and Theory and Archive Books (Berlin), the first publication by Beti Žerovc tackling the issue of contemporary curatorship. 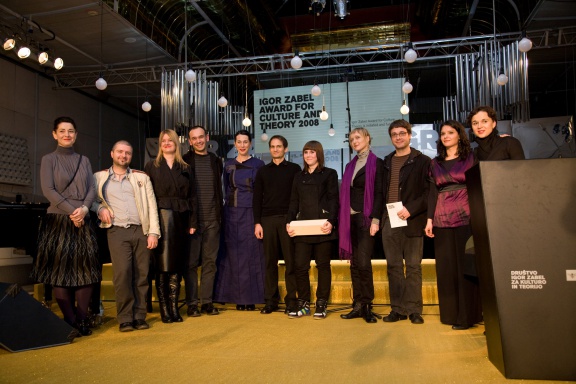