Bellow is the archival article on the Acropolis Quintet. The Quartet is not active any more. Kaja Draksler, however, is.

Jazz pianist Kaja Draksler (born 1987 in Kranj) is a young promising musician, typical of her generation, which compared to previous generations of Slovene jazz musicians enjoys more educational support and wider international connections. In 2005 after graduation she continued her studies at Prince-Claus Conservatorium in Groningen, Holland, and obtained her Bachelor Degree with honours in 2009. She started with her studies of classical composition at the Conservatory of Amsterdam in 2010.

In 2007, while still at the conservatory in Groningen, she founded the Kaja Draksler Acropolis Quartet, with George Dumitriu (guitar), Goran Krmac (tuba), and Kristijan Krajnčan (drums). Their first album, titled Akropola, was released by Goga Music. In November 2009 the quiartet released Türkü on the DruGod label, a CD mainly featuring Turkish singer Sanem Kalfa on vocals, singing renditions of Turkish traditional songs with modern arrangements. The with the addition of Kalfa, the quartet has now officially become the Acropolis Quintet.

Other projects of Kaja Draksler

The Kaja Draksler Acropolis Quartet and Acropolis Quintet are just two of the many ensembles and projects in which the young pianist has played an integral role. In 2007 Kaja Draksler released her first CD with her group Katarchestra, an international collaboration focused on reinterpreting Slovene folk motives into contemporary musical forms. Among the many projects in which she has been involved, her collaboration with the international European Movement Jazz Orchestra as composer and piano player stands out. In 2010 they released an album for one of the most exciting European jazz labels, Clean Feed.

Most recently she has founded BadBooshBand, a trio with Draksler on piano, Mattia Magatelli on bass, and Luca Marini on drums. BadBooshBand explores more adventurous currents of contemporary jazz, delving into improvisation as well as composition.

The Katarchestra octet ensemble in performance, 2007 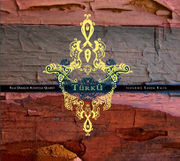 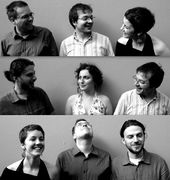