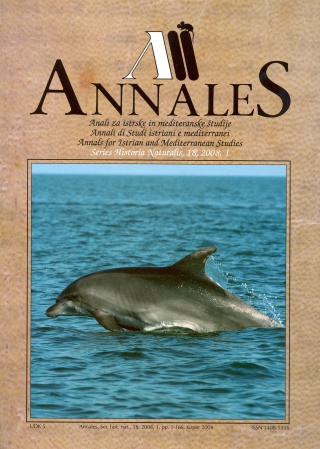 Annales Journal, the Annals for Istrian and Mediterranean Studies, is a quarterly journal published since 1991 in Koper. It focuses on the humanities and social sciences, multicultural and multi-ethnic relations, and natural history topics, primarily ecology and biology. The Board of Editors includes international experts from Italy, Croatia, Austria, Israel, France and the USA. The journal is included in the international database of citations Thomson Reuters: Arts and Humanities Citation Index (A&HCI) and Social Science Citation Index (SSCI).

Its founder and original publisher was the Historical Society of Southern Primorska in Koper. In 1994 the Science and Research Centre of Koper (SRC Koper) was set up; it began to operate in 1996 and since then its infrastructural unit Annales Publishing House has been a co-publisher of the Annales Journal.

The journal was initially published only annually; from 1994 it has been issued twice per year, one issue covering the field of natural science (Series Historia Naturalis), the other one the humanities and sociology studies (Series Historia et Sociologia). From 1999 (Volume 9), however, the journal has been published quarterly, with two issues from each of the abovementioned series.

The basic aim of the journal is to publish scientific writings from history and sociology (mainly dealing with multicultural and multi-ethnic relations) and the natural sciences (primarily dealing with nature conservation, ecology and biology). It covers the regional territory of three countries of the northern Adriatic region: Slovenia, Italy and Croatia.

Mainly multi- and interdisciplinary comparative studies are contributed to by international experts and some themes are continuously tackled. Annales features regular contributions from the Historical Society of Southern Primorska, Koper and co-operates with many other journals.