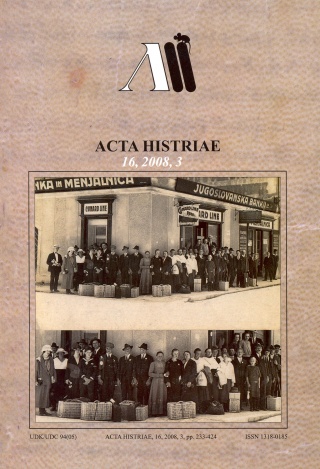 Acta Histriae is a monograph serial publication published since 1993 by the Annales Publishing House. It contributes to collections of supplemented lectures from international scientific meetings related to the history of the Istria region organised by the Science and Research Centre of Koper (SRC Koper) and the Historical Society of Southern Primorska, Koper and in cooperation with other relevant institutions, such as the University of Venice, the University of Ljubljana, and the Croatian Institute for History. The Board of Editors includes international experts from Italy, Croatia, and the USA.

Since 1999 the publication has regularly appeared in two volumes each year; since 2004, the journal has also published revised scientific contributions from scientific meetings and other original scientific papers and reviews in the field of historiography.

Papers in Acta Histriae are published in Slovenian, Croatian, Italian, and English, and sometimes in other world languages; papers typically include longer abstracts in English or in some other international language, while foreign-language papers include longer abstracts in Slovenian. All papers also contain brief extracts in the original language and in one world language (Italian or English). The papers are written by recognised Slovenian and foreign historians and reviewed by at least two prominent reviewers.

Examples of past topics include: The 1,400th anniversary of the Koper Diocese and the First Mention of the Slavs in Istria; The History of Honour, Identity in Informal Legal Practice (The Mediterranean, 12th–20th centuries); The Systems of Power and the Power of Institutions; The Paris Peace Treaty; The Great Reformer of the 18th Century: Gian Rinaldo Carli between Istria, Venice and Empire; Perspectives of Law in Istria (14th–18th centuries); Istria and Venetian Republic: Institutions, Law, Administration; and The Rizane Placitum, Istria and Friul. The lectures from two international scientific meetings about the history of Istria have also been published. The majority of papers from past issues are available online in pdf format.