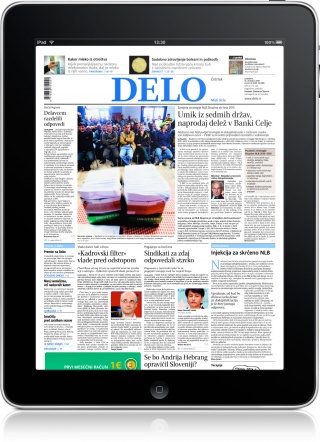 Delo [Labour] is a central Slovene national daily newspaper that appeared in May 1959 with the merging of the two dailies Slovenski poročevalec and Ljudska pravica). An evening version is available as well as a day version. According to the Readership and readers survey by Valicon, Delo in 2018 was read by 179.600 people each day, which gives it a 11.3 per cent daily reach.

Since 1991 Delo newspaper also confers the Kresnik Award for the best novel of the previous year and the Delo Personality of the Year Award.

The newspaper covers all fields, from Slovene national and local politics and regional news to world events, culture, sport, economy and also commentaries and reports. Every day 1 to 2 pages are dedicated to articles on culture, with an additional 1 to 2 pages called Deloskop for cultural events (exhibitions, concerts, performances, lectures) around Slovenia on that day, plus comprehensive information on recommended events. Deloskop is divided into several sections according to artistic disciplines and genre – film, theatre, books, museums, children, exhibition and lectures.

Between Monday and Saturday Delo has several supplements: Ona [She], a magazine for women on Tuesday, Delo in dom [Labour and Home] about housekeeping on Wednesday, Polet [Flight or Enthusiasm/Drive] for sports and free time on Thursday, Svet kapitala [The World of Capital] on economy and finances Vikend TV programme on Friday, Super 50 monthly supplement for people over 50, and on Saturday the Saturday supplement Sobotna priloga. Delo has also a Sunday edition, called Nedelo, with its supplement Odprta kuhinja [Open Kitchen] food guide.

Delo publishes a special Sunday edition, Nedelo ("Idleness" or "non-work"; Nedelo is a play on words since Nedelja is Slovene for Sunday), in a smaller and bound (stapled) format.

International editions in the past

Le Monde diplomatique was published in Slovenian since 2005 and from 2008 till 2010 was included in the Delo newspaper every second Saturday.

Delo Publishing House also collaborated with The New York Times, which publishes an international digested weekly version, available in over 28 countries around the world. From May 2009 and up to 2012 an 8 page long NYT weekly supplement in English was published in Delo with 5 per cent of content produced locally. The supplement was included in the newspapers in the Maribor and Ljubljana region on Fridays.

Delo Newspaper for iPad, the newspaper covers all fields, from Slovene national and local politics and regional news to world events, culture, sport, economy and also commentaries and reports

Delo's archives, the content from recent years can be browsed online (Delo online version) but the archive on Dunajska street, Ljubljana, is also open for visits by appointment

Delo Newspaper hosting a round table, 2010

Late night work hours at Delo Newspaper, Delo [Labour] is a central Slovene national daily newspaper that appeared in May 1959 with the merging of the two dailies Slovenski poročevalec and Ljudska pravica
Retrieved from "https://www.culture.si/w/index.php?title=Delo_Newspaper&oldid=271628"
Categories:
Hidden categories: