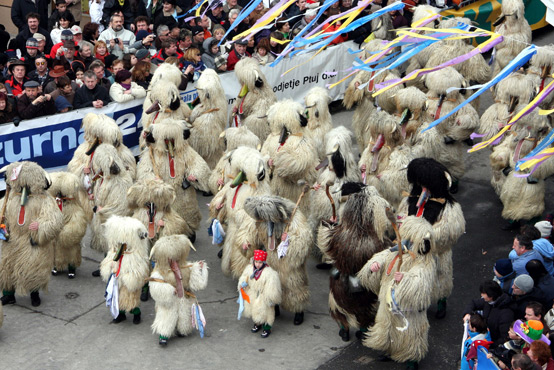 The masked rite of spring known as Kurentovanje is held since 1961, every February for 10 days up to Shrove Tuesday and is the most popular Mardi Gras celebration in Slovenia; most of the festivities are centred in and around Ptuj, Slovenia's oldest town, which has hosted Kurentovanje for around five decades. The Carnival was admitted into the European Federation of Carnival Cities (EFCC-FECC) in 1991. In 2017 the Door-to-door rounds of the Kurent were inscribed on the UNESCO representative list of intangible cultural heritage of the humanity.

Groups from Austria, Croatia and Bulgaria usually participate in the event, assisting local people to build up the Land of the Kurent. The rite itself is accompanied by a full agenda of concerts, activities and other attractions, ensuring that the event is attended by more than 150,000 visitors every year.

The name comes from the festival's central figure, the Kurent, who in earlier times was believed to have the power to chase away winter and usher in spring. The origins of the Kurent and Kurentovanje festivities are obscure, and may have come from earlier Slavic, Celtic or Illyrian customs. Similar traditions are found throughout the region, in parts of Croatia, Hungary, Serbia, Bulgaria and elsewhere. The costume is simple: a sheepskin hat and outfit, cow bells hanging from a chain belt, red or green wool socks and black boots. However, the creation of the Kurent mask is a major folk art in Slovenia, although there are now only two masters of Kurent masks left – Master Klinc from Spuhlja and Master Zelenik from Markovci. The mask is made of leather, with two holes cut out for the eyes and a hole cut out for the mouth. The holes are surrounded with red paint. A trunk-like nose is attached along with whiskers made of twigs and teeth made of white beans. The final touch is a long, red tongue.

Studies of the Kurent tradition have been conducted at Ptuj – Ormož Regional Museum and BISTRA Scientific Research Centre, Ptuj.

Kurentovanje Festival has been included in the programme of the Maribor, European Capital of Culture 2012, Ptuj being one of its partner cities. The aim is to turn the festival in the largest ethno carnival in Europe. The ethnological guidelines were developed by Janez Bogataj and Aleš Gačnik, two scientists who acknowledge the constant metamorphoses and transformations of this tangible heritage.

CLEANSING THE KURENT | Multimedia Installation by Markus Nylaander on Vimeo