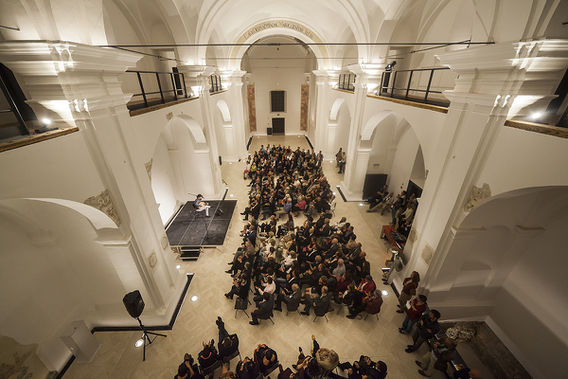 The Minorite Church, Maribor is a recently established performing arts venue that opened its doors in 2015. Set on the banks of the Drava River in Maribor, in the city's medieval quarter called Lent, the former church was given a thorough renovation between the years 2013 and 2015. Since then it is used for a variety of cultural events, from classical music and contemporary choir concerts to puppet theatre plays, dance performances, lectures and various exhibitions.

The venue is managed by the Maribor Puppet Theatre, which is since 2010 located in the adjacent former Minorite Convent (also recently reconstructed). Allowing for an audience of approximately 300, the refurbishment of the church as well as the convent has been designed by ATELIERarhitekti.

During the reconstruction, the archaeologists discovered that the church was actually quite a bit older (ca. 300 hundred years) than previously presumed. It is now dated to be built sometime in the 12th century on the site that furthermore boasts a far longer history. Some of its Romanesque era foundations (from the time when it was the biggest church in the region) can still be seen, as can its later Gothic permutation that featured the oldest known Gothic portal in Slovenia.

Since then, the church has gone through a series of further changes and "baroquitizations" up until 1784, when it was – under the Josephine reforms – claimed by the army as its barracks and warehouse space. In the 20th century, the building got nationalised and used for storage until left unoccupied in 1990. It remained empty right until its remodelling into an art venue.

As the renovation unearthed a number of artefacts and old tombs beneath the church grounds were discovered, an additional basement floor was added. One can enter it through the convent and there witness the three main layers of the church's architectural history – its Romanesque, Gothic and Baroque features. The crypts and some other remains are also exhibited.

Even before 2015, the place served as an occasional venue for alternative scene stage performances during the period when the SNG Maribor was led by Tomaž Pandur, e.g., a vanguard interpretation of the Wedekind's Lulu directed by Eduard Miler in 1990. Additionally, it was occasionally used for various other occasions such as the Lent Festival, which immediately started to use it again.

The grand opening of the Minorite Church was organised under the auspices of the Festival Maribor in September 2015, with the Egyptian oud virtuoso Joseph Tawadros giving the new venue's baptismal performance. The festival is still running a part of its programme here, with the cellist Nicolas Altstaedt hosted in 2016. The church is also used by the contemporary choral music festival Janus Festival, the Contemporary dance Platform festival, the Maribor Music and Ballet Secondary Conservatory, the famed choir Carmina Slovenica and naturally also the Maribor Puppet Theatre. The latter, for example, utilised it for its site-specific puppet show Pirat in luna, a shadow puppet play by Tin Grabnar. Nevertheless, the core of events shall remain of a more musical nature.