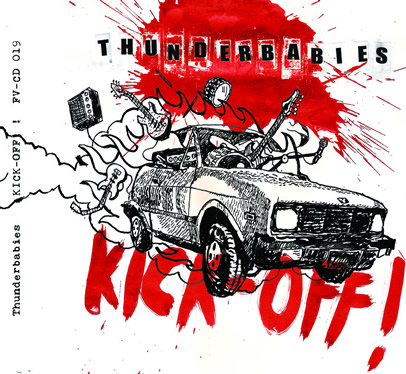 Cover of KICK OFF album by Thunderbabies, published by FV Music, 2014

Thunderbabies were established in 2002 and since then, they've established themselves as one of the cornerstone bands of the Slovene rock'n'roll scene. Mixing garage sounds, punk-rock, blues and the various traditions of rock'n'roll that span from Detroit to Australia, they nevertheless hold a very recognisable sound.

They appeared at the FV Music Festival in Ljubljana in 2003 and were selected for the Klubski maraton (Radio Študent) in 2004. In the following years, they've played regularly at numerous clubs and festivals such as Lent Festival, Garage Explosion Festival, Festival at the Border, and again at FV Music Festival (in 2015). They've also had gigs in Austria, Serbia, and Croatia.

The band members' history goes back to the punk'n'roll band IQ-22, later named IQ-Dealers. Their next emanation was the underground rock'n'roll band Sonic Spastic, who eventually renamed themselves after their own song "Thunder Baby". They started as a trio whose sound could be affiliated with the bands such as Devil Dogs, Real Kids, Ramones, Stooges, Dirtbombs, Dead Moon, and Tom Waits.

In 2014, the trio became a quartet. In 2015 Thunderbabies released an album for FV Music. They now consist of Alenka Hrvatin (bass, vocals), Juš Šenica (drums, vocals), Tomaž Berginc (guitar, vocals), and Brane Škerjanc (guitar, vocal). The latter is also the host of a weekly radio show about rock'n'roll at Radio Študent.

Cover of KICK OFF album by Thunderbabies, published by FV Music, 2014 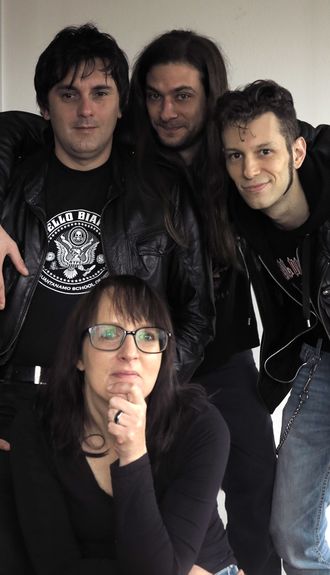