The printed version of the calendar of Festivals in Slovenia in 2012 contains 141 festivals. Later on, in 2019, the festival number rose to 199. Check out the current annual festivalscape!

According to the interactive infographic on how Slovenian festivals are dispersed throughout the year, we can now make a rather qualified announcement that the festive season is (finally) about to be over. Culture is once again blissfully sliding into the blandness of the everyday, and most of the 217 active festivals in our database have already happened for 2015.

Also, the Culture.si editorship is now more or less done with compiling the data on festivals, an enterprise onto which we have put our focus this past summer. Though finding that total comprehensiveness is a desperately futile endeavour (rather similar to an infinite whack-a-mole game), we’re at the moment reasonably content with the current state of affairs. As the Culture.si portal is foremost focused on the international audience, the primary criteria for including a festival into our listing is an internationally-minded programme. Yet, as we nevertheless wished for a broader picture of Slovenian culture to emerge, this did feel a bit unsatisfactory and so some additional entries have been included. Admittedly, these exceptions were chosen on a somewhat arbitrary assessment of either their historical prominence or just plain contemporary impact (naturally, we stand to be corrected or challenged here). Thus you can find in the list a few of the more prominent folk pop music festivals (Števerjan Festival, Ptuj Festival, Slovenian Polka and Waltz Festival, Avsenik Festival) listed alongiside the already diverse package with the likes of Beer and Flower Festival, Club Marathon, Kurentovanje, the Slovene Advertising Festival and the Škofja Loka Passion Play.

This colourful mélange brings into askance the definition or at least the borders of the concept of a festival. The burgeoning meta-festival landscape (which spans from culture studies musings and a whole statistical sub-genre to tons of EU-funded papers and guidelines) is not very forthcoming on this, but annual (or bi-tri-ennial) repetition works reasonably well as a starting point. Be it a graphic biennial, a showcase, a tradition manifestation or a good old party-in-the-mud type of thing, if it quacks, it’s a duck. Yet, even if barks but calls itself a duck (like regular programme cycles claiming to be festivals), well, then it’s a duck as well. It seems that the festival does not actually stand for any particular mode of culture production; rather it is a semantic fishnet that helps to catch the countless and unaccountable freelancing forms through which arts and culture perform their daily strivings for attention, recognition, funds, space, originality, survival, history, and – obviously – very often also the summer sun.

The printed version of the calendar of Festivals in Slovenia in 2012 contains 141 festivals. +
TeaserImg 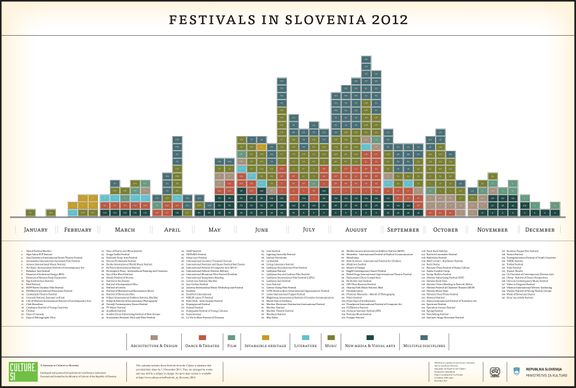