The independent Front Rock label was founded at the end of the 1980s by Dušan Hedl, organiser, activist and member of the now veteran band Center za dehumanizacijo (CZD) from Maribor and the region of Štajerska. Since then, numerous young bands and musical artists have made their public début on the Front Rock label. In 1999, the label was integrated into the broader music publishing programme of a new cultural NGO for art production and publishing, Subkulturni azil Maribor, today named Cultural Centre Maribor.

The label has thus far featured all the music created by Center za dehumanizacijo (CZD) (13 recordings) and about 15 recordings by other bands or compilations, including Polska malca, Pure Laine, Delaware, IN4S, Schnele Fe - The MI, Pridigarji, Scuffy Dogs, Dr Zero, Hoću? Neču! (Serbia) and American MDC. Some LPs and CDs are sought-after curiosities, both at home and abroad.

Front Rock's series of compilation recordings from the No Border Jam Festival represents an important promotional tool for contemporary rock. Its current programme features primarily ground-breaking first recordings of talented and skilful musicians. Subkulturni azil releases include: Xenia Jus, KvinTon, Roma Ramadan, Tamburaši iz Cirkulan and Electric Tea. Subkulturni azil – Front Rock recordings and sound editing are mostly done at the Studio at the Border, which presents a platform and a stimulus for local and international creative cooperation and networking in the field of music.

The Poets Sung By Rockers series

The interdisciplinary field has been explored through a CD series Rokerji pojejo pesnike (Poets Sung By Rockers) conceived by Subkulturni azil and published within the MKC Maribor Youth Culture Centre. 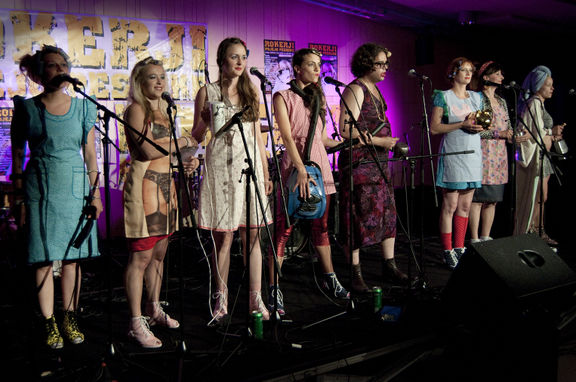