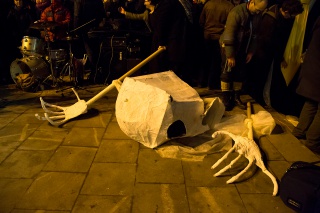 Teatro matita was established in 2002 by musician and puppeteer Matija Solce after he completed his studies at Bruno Leone's traditional Italian hand puppet school in Naples. Solce tries to stimulate the audience's imagination with his belief that everything can be a puppet (from the most usual everyday object such as a bicycle bell to the more unusual such as a bone), performing all over the world in all kinds of places (theatres, outdoor stages, prisons, schools ...). Considering his musical education and collaboration with folk musicians, it is not surprising that music plays an important role in his work. His productions are often a combination of puppet show, folk music performance and acting (an actor is also a puppet).

A founder of the International Centre of Puppetry Arts in 2005, Matija Solce is head of the Cultural Association for Puppetry, Folk Music and Ecology Matita established in 2007 and collaborates closely with Lutkarnica - Koper Puppetry Studio.

Teatro matita collaborates with the PUF Festival as an organiser of presentations of student productions of the DAMU Academy in Prague and various other European puppetry schools. Solce started also the HISTeRIA Festival in the Istrian village Gračišče. As an activist he introduced puppetry into a special form of political rally – the "Protestival".

His first show E beh? proved a great success and was subsequently presented at the Ana Desetnica International Street Theatre Festival, the PUF Festival (Award for Inventive Transformation of Tradition) and the Trnfest Festival in Slovenia, as well as at a range of other festivals in Italy (2nd place in the Marionetta d'Oro Award at Mittelfest in Cividale), Austria (Mini-Mikro-Impro), France (Charleville), Spain (Santiago de Compostella), Estonia (Treff Festival), Austria (Multikids), Slovakia (Cibulak), Russia, Belgium and the Czech Republic.

His next production The Joke, an evocative mix of object and wordplay, sound and body movement, received an award at Mittelfest in Cividale in 2007. A production based on Gogol's short story followed. Nose combines absurd and grotesque drama, puppet theatre and expressive acting with the least speaking possible. In 2009, the production Attention, MOOSE! was created in Sweden. It is a simple story about the relationship between man and nature with folk motives from Europe and Latin America that give the music an important role in expressing the characters and the atmosphere.

Puppets as a rally prop at the Protestivals in the streets of Ljubljana in 2013
Retrieved from "https://www.culture.si/w/index.php?title=Teatro_matita&oldid=290826"
Categories:
Hidden categories: