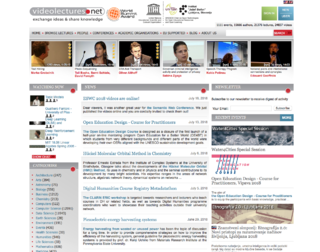 Managed by the Center for Knowledge Transfer in Information Technologies at the Jožef Stefan Institute, the VideoLectures.Net international web portal (online since 2002) promotes science, exchanges ideas and fosters knowledge sharing. It is the world's largest collection of free educational online videos providing high-quality didactic contents not only to the scientific community but also to the general public. In April 2010, the "Ethics for the New Millennium" lecture by His Holiness the Dalai Lama was published as the 10,000th video on the portal. In 2013, the United Nations and UNESCO declared Videolectures.net as the best educational project of the decade in the "e-Science & Technology" category.

The portal is becoming a major reference video training material repository and dissemination channel for academic researchers all around the world. Most of its content is released under the Creative Commons licence.