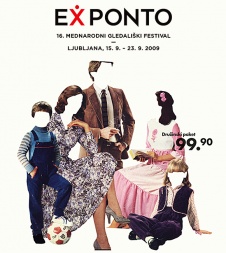 Damir Domitrović (1963–2016) led the Ex Ponto International Festival since its inception. He was also a co-founder and spiritus movens of the B-51 Cultural Society and the New European Theatre Action (NETA). After he passed away in May 2016, the festival was put to a stop until further notice.

The Eẋ Ponto International Festival was launched in 1993 by the B-51 Cultural Society, whose work has been rooted from the outset in a strong humanistic, political, and social foundation. Focusing on maintaining connections with other parts of the former Yugoslavia and South-Eastern Europe, the annual Eẋ Ponto festival presents national and international contemporary theatre and performing arts works, which are often realised through cultural exchanges and joint venture projects with prominent festivals in these regions. The festival usually presents at least 10 domestic and foreign productions (often large-scaled) during a period of 10 to 14 days, plus a range of projects aimed at further enhancing and promoting inter-cultural exchange.

Eẋ Ponto International Festival is a member of the New European Theatre Action (NETA) and since November 2007 the seat of the NETA Secretariat.

During its over 16 years of activity, the Eẋ Ponto International Festival has succeeded to achieve its initial goal to stimulate communication and international cooperation and exchange between the Balkans and other East European countries, as well as with Western Europe, through presenting contemporary theatre and performing and visual arts productions to Slovene and international audiences. The festival aims to present productions which tackle the burning issues of contemporary society by adopting critical and (politically) engaged perspectives on questions at stake as well as display a high level of mastering the art of contemporary performing art practices.

In addition to foreign performances, the festival's programme also includes domestic productions and local premières of most penetrating and innovative performances, which have already been presented at partnering international festivals. These performances, which enjoy great acclaim at local and foreign stages, are for the most part co-productions of the festival's organiser B-51 Cultural Society, whose basic activity is the production in the field of performing arts, with foreign partners, such as Festival Infant, Serbia; Festival MOT, Macedonia; Laboratorio Nove, Italy; Festival Teuta – New Ancient Theatre, Monte Negro; International Festival of Contemporary Theatre Zadar snova, Croatia; etc.

In recent years, the programme of Ex Ponto has been selected in view of a chosen topic. The theme of Eẋ Ponto 2007 was Theatre and Politics. The 2008 edition ran under the title Faith and Believing and featured an installation/exhibition by the visual and sound artists Tanja Vujinović, co-produced by Eẋ Ponto and Ultramono Institute and presented at Kapelica Gallery, and an international group exhibition, co-produced by Škuc Gallery and City Museum of Ljubljana, which has dealt with the question of the art system and the individual's positioning in it. The participating Slovene artists were Irwin and Franc Purg. The 2009 programme tackled the theme Family and presented a wide range of aesthetic approaches to deconstructing the established notions of familial belongingness.

In 2010 the Ex Ponto subject was Taboo?, its presence in the various fields of human personal and social activity, it was followed by topics The End or the Beginning? (2011), New or Old Values? (2012), Where is the Limit? (2013); within the context of the individual, his integration in the society and changes caused by political turmoil, economic recession and the processes of globalisation. In 2014 the topic New Bridges continued, and brought the 2015 festival topic World of My Own.

The festival is presented at different venues in Ljubljana, such as Stara Elektrarna - Old Power Station, Cankarjev dom, Mladinsko Theatre, City Museum of Ljubljana, etc., as well as at other non-theatrical spaces.