The Folk Museum Rogaška Slatina is made up of a curious and highly diverse collection of historic artefacts and stories, as gathered and curated by Nani Poljanec. Nani, a very colourful persona in his own right, has been working on this collection for the better part of his life and currently it is made up of more than 40 different sub-collections. Its three focal points, however, are the Karađorđević dynasty, local studies, and philography (the collecting of autographs, especially those of famous persons).

Since 2012 the better part of this collection is publicly displayed at Ana's Mansion (Anin Dvor), a newly built exhibition venue (that also holds a display of art graphics) in the spa town of Rogaška Slatina. The exhibition was enlarged and renovated in 2017. 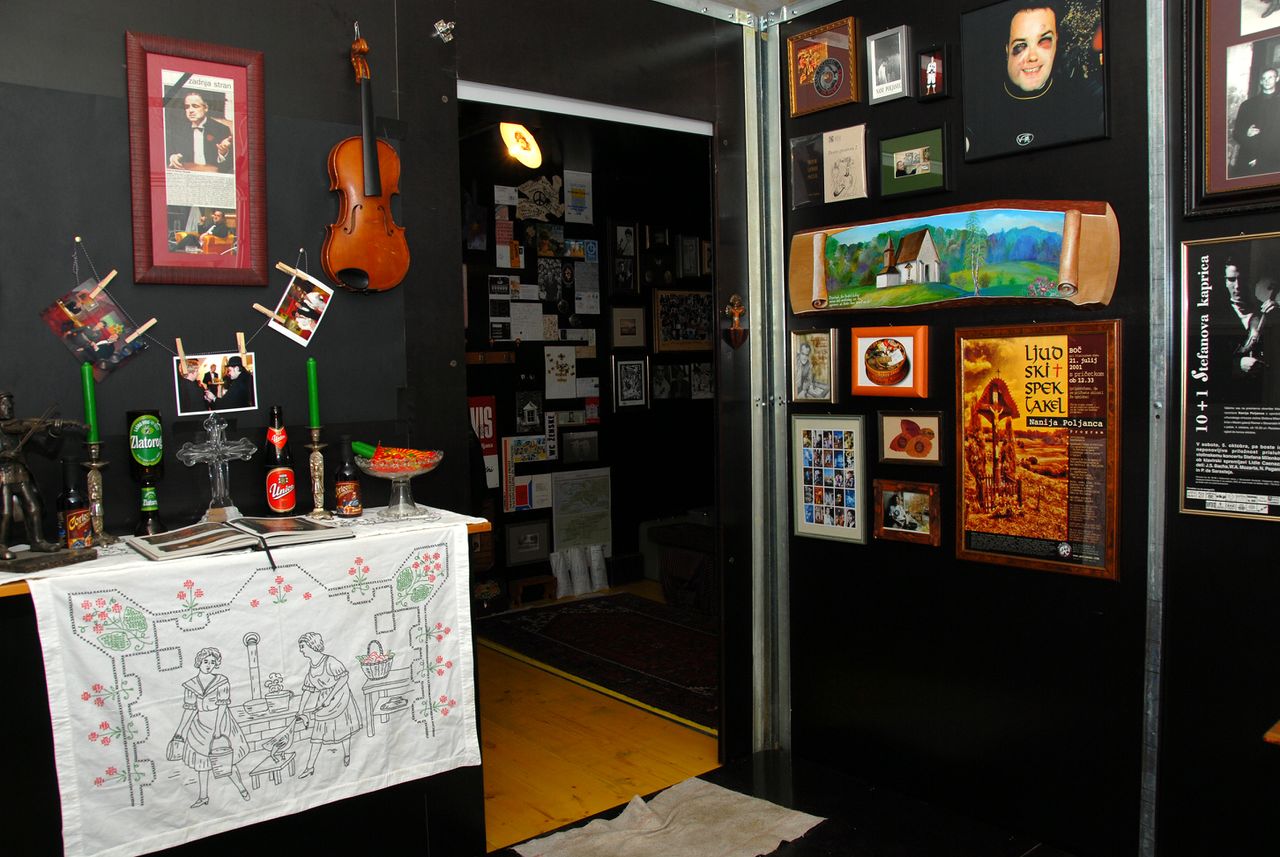 For a long time, the Folk Museum of Nani Poljanec, Rogaška Slatina was more or less a privately-held collection. In 2006, a part of it was displayed in The Cabinet of the Domestic Research Society.

Ever since the early days of the 19th century, Rogaška Slatina has been a well-known spa resort, thus naturally leaving a mark on the region and its people. Its heritage is one of the leitmotifs in Nani's collecting passion, which he has been indulging in ever since his teens.

In 2005 the so called "Folk Museum of Nani Polajnec (1968–2069)", then still located at his home, had its first truly public presentation in the Old Post Office building of Rogaška Slatina. The collection was also partly exhibited in Ljubljana, in the Cabinet of the Domestic Research Society (2006), and in Celje at the Celje Museum of Recent History (2009). An integral part of the exhibition, especially when still held at Nani's house, were the stories Nani told about each individual piece.

Of the three thematically rounded sets, the most recent one (in the making since 2008) is the so called "King's Collection". It is the biggest private collection (letters, documents, oil paintings, photos, clothes,...) of the Serbian and later old Yugoslav royal family of the Karađorđevićs (1903–1941).

The "local cultural heritage collection" features a variety of stories on the Rogaška Slatina spa and surroundings, from photographic material, documents (such as the old spa development plans) and books to local glassware products, bottles and labels of mineral water (dating back to the mid-19th century).

The philography section mainly offers autographs (among them, one can find ones by Tito, Mussolini, Arafat, Gadafi, Donald Trump, Bud Spencer and Jurij Gagarin), coupled with some related objects.

Nani Poljanec is the alias of Aleksander S. Jurkovič. Besides being a collector, he is (among other things) also a photographer, a fashion designer, an impersonator (he impersonated Don Vito Corleone on the satirical evening programme on Slovenian National Television, a singer (in 2007 he almost won the competition to represent Slovenia at Eurovision), a poet (he released a book of poetry called The Tryptich of Folk Poetry, with a print run of two), an ethnologist (he published the first Slovenian book on philography and an album with regional songs and dialects), and a music manager (for a time representing Teofil Milenković, a wunderkind violinist).

He has set up literally hundreds of cultural events; although most of them took place in his local town, some also happened in Ljubljana, Vienna, and Belgrade. A notable one from his early days is the first concert of the group Laibach in Rogaška Slatina in 1993, accompanied by a set of public performances called "Blacksmiths of the Future".

Nani acts as Rogaška Slatina's cultural attaché and has close relations with descendants of the Serbian royal family of the Karađorđevićs. In 2009, on the occasion of the 75th anniversary of the murder of King Alexander Karađorđević (1934), he exhibited his collection as a guest of honour in the family's mansion in Oplenac, Serbia.

In 2011 with a group of friends and collaborators, Nani Poljanec established the exhibition space called KunstHaus Top Sekret Gallery, held at a secret location (it is suspected that this was actually his water closet). KunstHaus published its own fanzine, featuring absurdly-tinged contributions in various languages.

Nani Poljanec established his own educational system, the Folk Faculty, where he is simultaneously the only student, professor, and rector. After every project he publicly gives himself a grade. He aims to get a Majgisterij (as opposed to a Magisterij, a master's degree) for Folk Art and Creation. He plans to conclude his studies and end his life project in 2069, when he will be 101 years old and will receive his doctorate in Folk Art and Creation. 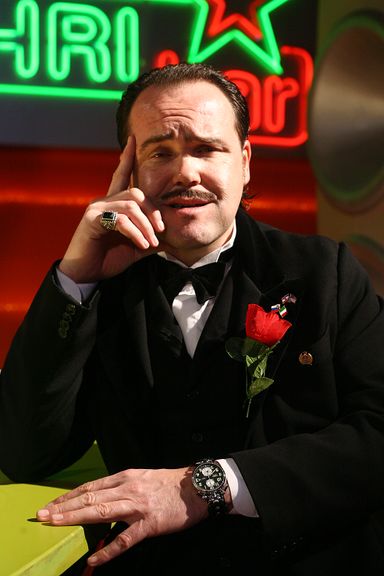 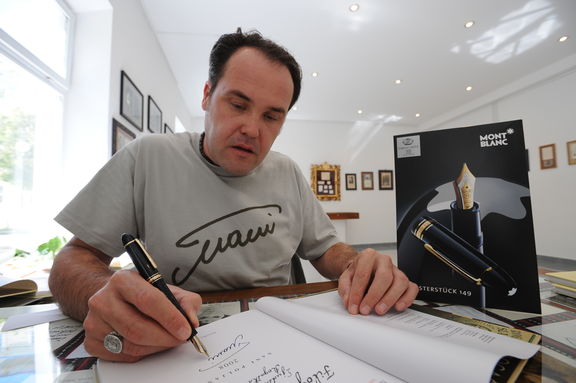 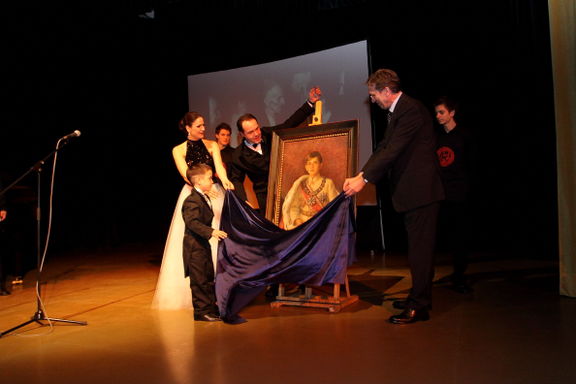 The unveiling of the portrait of Petar II Karađorđević painted by Ivanka Bukovac in 1936. The picture was purchased for the Folk Museum Rogaska Slatina collection by Nani Poljanec and 250 donators, January 2010. (From left to right: Manca Izmajlova, Attanasie Milenković, Nani Poljanec and Predrag Filipov, the Ambassador of the Republic of Serbia in Slovenia) 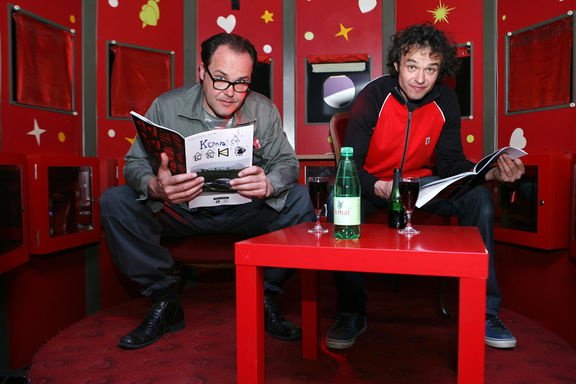 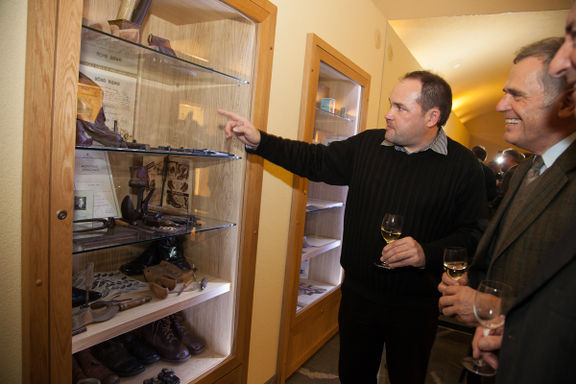 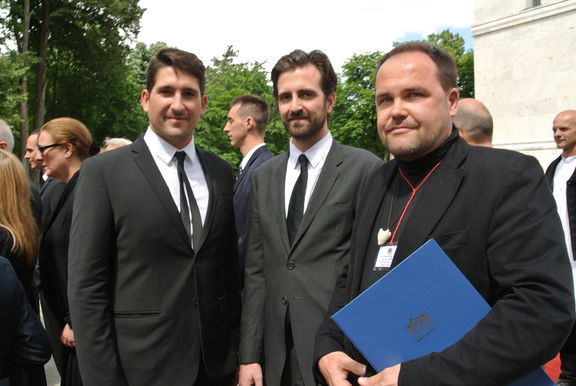 Nani Poljanec with the guests of the 24-hour piano playing marathon with 50 participants, coorganised by Poljanec at the Cristal Hall of the Rogaška Hotel, July 2012. 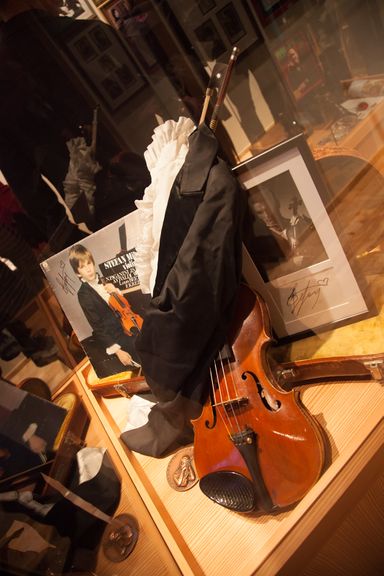 An autograph of Stefan Milenković, a Serbian child prodigy and famous concert violinist, his first violin and a frock coat. Part of the Philographic Collection of the Folk Museum Rogaška Slatina at Ana's Mansion, 2012 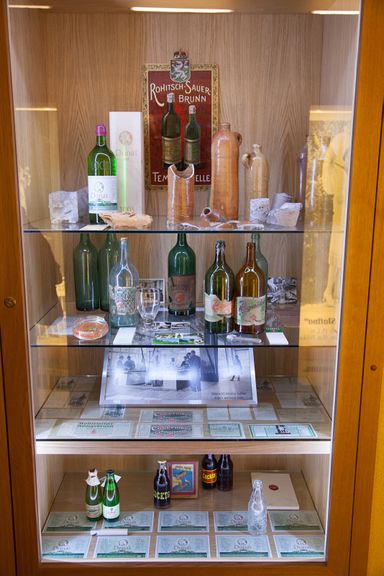 A display cabinet with healing mineral water bottles (the oldest ones made of clay) and old bottle labels. Folk Museum Rogaška Slatina at Ana's Mansion, 2012 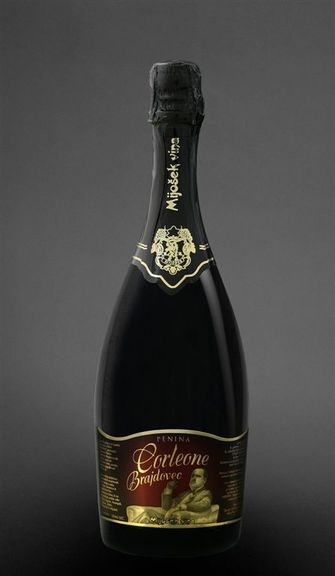 Corleone brajdovec penina, a sparkling wine produced in cooperation with the company Vina Mijošek. The money from the sales of it was given to the victims of the Železniki flood, Folk Museum Rogaška Slatina 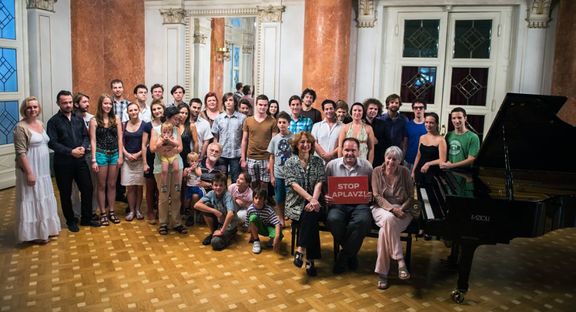 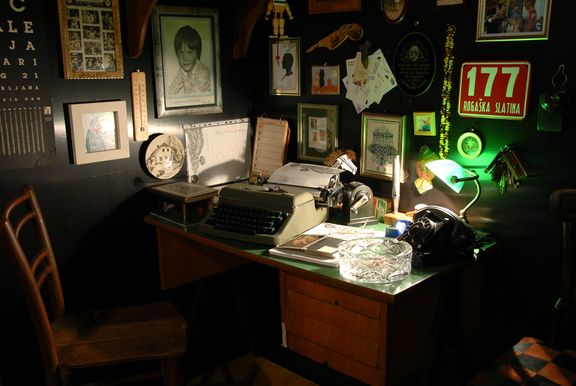 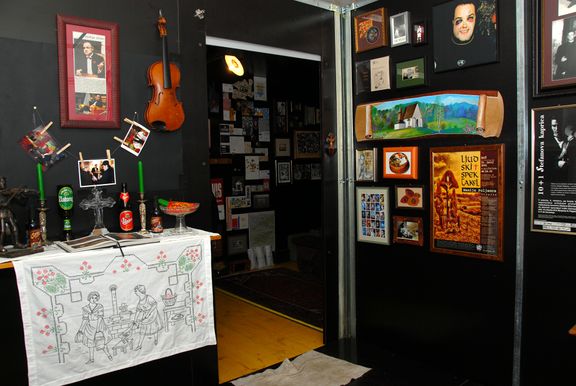