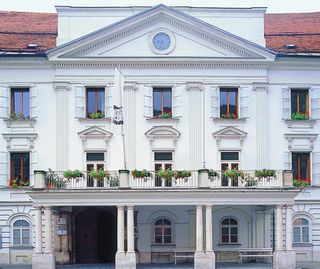 As a public institution the Celje Museum of Recent History focuses on the cultural heritage of the town of Celje and the Lower Savinjska region from the beginning of the 20th century onward. The permanent exhibition presents the everyday life of the town and its inhabitants in the 20th century while the temporary exhibitions turn towards personal stories and cover pop culture, sports or various historical chapters. The museum's distinguished feature is the Herman's Den, the first Slovenian children's museum.

The museum was established in 1951 as a department for the History of the National Liberation War at the Celje Municipal Museum. In 1963 it became an independent cultural institution and moved into the premises of the former town hall of Celje where it is still situated today.

The museum's permanent exhibition, Living in Celje, first opened in 2000, and was renovated and reopened in 2009. It features the Diary of Three Generations on the first floor, showing how each generation lived in Celje in the course of the 20th century. On the second floor is a reconstruction of Celjska Street as it looked in the period between the two World Wars. Visitors can walk through various trade shops, the market and a middle-class apartment.

Other permanent exhibitions include the museum's Dentistry Collection, donated to the museum by the private collector Franc Štolfa (1993). Herman's Den (since 1995) represents the first Slovenian children's museum with a playroom, gallery and theatre. On the invitation of the Hamada Children's Museum of Art in Japan, Herman's Den was presented in Japan in 2009.

The Celje Museum of Recent History administers also two museum branches. The Josip Pelikan Photographic Studio, Celje, with a beautiful glass parlour and all original equipment, from the end of the 19th and early 20th century. The other is the Anti-Nazi memorial site Stari Pisker Prison, known by locals as "The Old Pot". This former Minorite monastery was the site of Nazi violence during World War II, today it is a memorial for the several hundred people who were tortured and executed there.

The Celje Museum of Recent History has 17 main collections. Starting with the most general historical collection of items from the 18th, 19th and 20th centuries, it has also very specialised collections of such items and topics as: trade, goldsmith trade, postcards, money, the EMO factory kitchenware, arms, decorations and medals, scales, posters, farewell letters, children's toys and crafts. The museum also has a photo and video archive that can be viewed and studied by appointment.

Especially worth mentioning is the Fund of Alma Karlin. It consists of 850 objects, books, drawings, sketches, photographic material and testimonies about an amazing woman, world traveler, writer and anthropologist from Celje, Alma Maksimiljana Karlin (1889–1950) and her close companion Thea Schreiber Gamelin. In memory of the 120-year-anniversary of Alma's birth, the Celje Museum of Recent History published the anthology Alma's Boundaries and Margins (2009).

The Celje Museum of Recent History is a member of the International Council of Museums (ICOM) and the Hands on! Association for Children's Museums. With the Museum of Europe in Brussels they collaborated on the exhibition The European: His Story. Celje Museum was also a partner in the European project Museum Sign Language Guide, an education and museum guidance for people with hearing disabilities.

The JUMUM – Jugend und Musik und Museum project supported by the EU Culture Programme 2010–2012 and led by Austrian partner from Bad Ischl popularised the music genre of operetta. The exhibition and some performances took place in Bad Ischl on the occasion of the 50th anniversary of the Lehar Festival and in Eggenfelden, Germany, while in Celje some workshops and a school project The Faces of Operetta took place.

One of a collection of moving farewell letter's from WWII prisoners of war who had learned they would be executed, Stari Pisker Prison, known as The old pot, Celje Museum of Recent History, 1942

A memorial room in Stari Pisker Prison which was a site of WWII atrocities and established as a war memorial in 1965, Celje Museum of Recent History

Permanent exhibition Living in Celje follows the chronological history of Celje into the 20th century, Celje Museum of Recent History 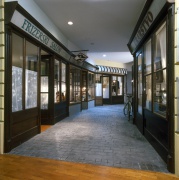 The old pot, Stari Pisker Prison, was a Minorite monastery until the 19th century when it became a prison, used by German forces in WWII, established as a war memorial in 1965, administered by Celje Museum of Recent History

Children's museum in Celje Museum of Recent History, established in 1995, currently the only such specialised museum for children in Slovenia 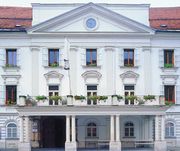