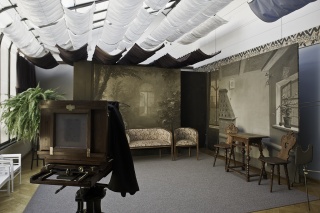 Josip Pelikan Photographic Studio, a branch of the Celje Museum of Recent History, was established as a museum exhibition in 1989. The studio is without a doubt one of the best preserved luxurious glass photographic ateliers in Europe with original equipment used by the famous Slovene photographer Josip Pelikan (1885–1977). The 19th-century glass photographic studio on the second floor makes daylight photography possible even today.

Occasionally the studio has been revived by Borut Peterlin, a professional photographer and an enthusiastic researcher of old photographic techniques.

The studio was first established by Johann Martin Lenz, a photographer based in Celje, who had this studio built in 1899, with three workrooms on the ground floor and a metal-and-glass structure on the second floor. The studio was heated, enabling the photographer to work in it all year round. In 1919 the house and studio were purchased by Josip Pelikan. The photographer left behind much high-quality documentary material from the time he lived in Celje between 1919 and 1977. He was the official photographer of the city of Celje and of the health centres of the region in the first half of the 20th century, for example, the spas Rogaška Slatina, Dobrna, and Rimske toplice. During Second World War he documented suffering and war atrocities that were forced upon people of Celje region. After the war he committed himself to landscape photography. At that time he was one of the best Yugoslav professional photographers and a strict mentor to his followers, teaching the traditional photography techniques of wet and dry glass negatives, retouching, and manipulation of white photo paper.